By gathering knowledge, volunteers step in to save and revive the Macedonian music industry 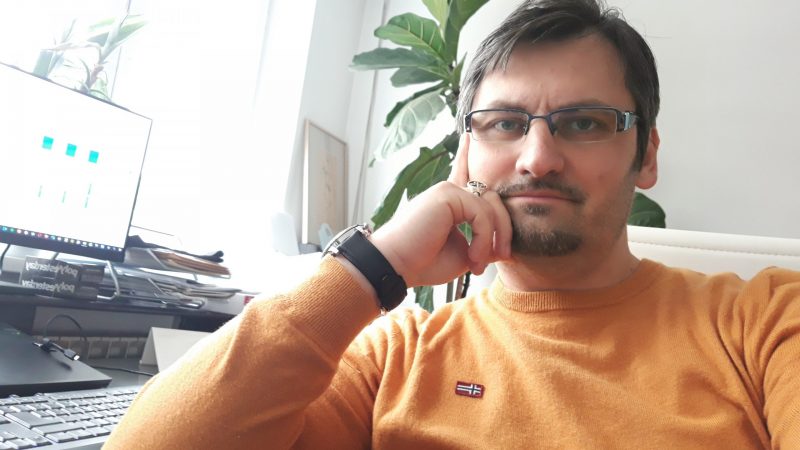 Gathering over 30,000 songs published in the previous 69 years, a group of enthusiasts has created the VBU Music Registry, the biggest public record database documenting music production from North Macedonia and music published by local artists abroad.

So far, volunteers of this nonprofit initiative have created a digitized archive covering over 2000 albums, 1000 EPs and over 5000 singles by over 11,000 songwriters, composers and performers, creating free online portfolios for them. The registry was founded in 2013 by Vasil Buraliev, IT developer and entrepreneur, who, in the 1990s, was a participant in the nascent electronic music scene in Skopje, as composer and producer.

Global Voices spoke to Buraliev about the challenges of digital activism in the area of culture in North Macedonia, the state of the music industry and the negative influence of COVID-19 on its business model.

Global Voices (GV): Why did you create the VBU Music Registry?

Vasil Buraliev (VB): I started the VBU Music Registry because of my love of music, which is a wholly romantic notion. I was motivated by a kind of revolt against the generally demeaning attitude against domestic music when compared to imported products, declining societal values and the lack of media freedoms. During that period (2012-2013) I resented the fact that mainstream media only aired music deemed politically suitable, while artists who were not close to the then-government were ignored or censored.

My intent was to create a media that will show the domestic public that the music promoted by mainstream media is not the best, and most importantly, not the only music created in the country. I wanted to showcase its cultural treasures, channeling  my anger against damaging and corruptive practices.

GV: VBU Music Registry fills wide information gaps in the Macedonian public sphere, enabling citizens to access information unavailable via commercial or academic sources. What experiences can you single out?

VB: Our biggest success is creating a community of individual enthusiasts united via self-governing model and creating new value by accumulating public knowledge about the music production in the country. At a broader level, this team provides services to a wide community of musicians and fans numbering around three thousand people. This results in a continuous, albeit slow, growth of public attention about domestic music.

At the moment, our biggest challenges are technical, from automating the data input about music publications to integration with online music streaming and download services. 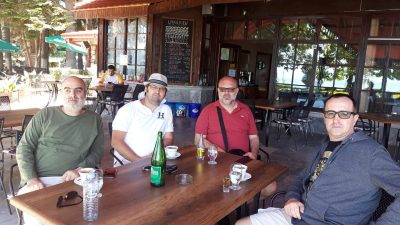 Geographically dispersed core team of VBU Music Registry rarely meets in face to face, and do all of their communication online (several team members are not in the photo). Courtesy photo, used with permission.

GV: How has the experience of starting and leading this initiative affected your life?

VB: I personally find the work on VBU Music Registry very fulfilling. This inner feeling of doing something good positively affects both my personal and professional life. The biggest benefit of doing voluntary and nonprofit activity is enabling me to meet a lot of good people. This also brings future potential for new kinds of both nonprofit and business cooperation. 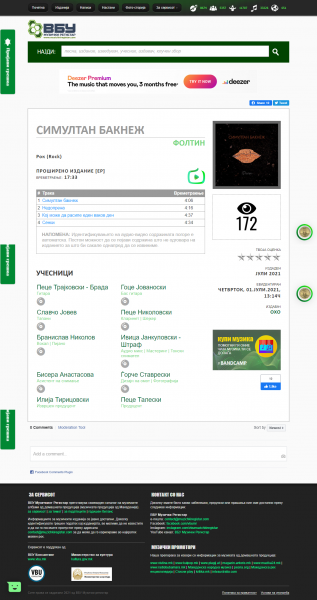 VBU Music Registry documents track recordings and all involved participants, from authors to performers. Screenshot of data on the album “Simultaneous kiss” by Foltin.

GV: How do you assess the state of Macedonian music industry at the moment?

VB: The state of the Macedonian music industry can be compared to a person with severe COVID-19 symptoms gasping for air via a ventilator.

Its predominant business model relies on income generated from live music events. Therefore, the restrictive measures limiting concerts, weddings and other live performances had a severe negative impact on most musicians. This also led to low demand for services of recording studios and producers. The events industry's losses have affected the whole supply chain.

Royalties are supposed to provide additional income to copyright holders — composers, songwriters and performers — proportionally to the number of times their recorded music is played in public via media or in hotels, restaurants and cafés. But musicians complain that a small group of well-placed individuals has been abusing this mechanism at the expense of the majority.

Moreover, actual selling of music on CDs or online has been almost nonexistent, and musicians lack access to other forms of income present in countries with more developed music industries. In my opinion the situation is desperate.

GV: Has this situation nudged musicians to use the opportunities provided by the internet, such as using digital services to sell their music?

VB: For most Macedonian musicians, live performances are the primary, and often the only income source. Even before the COVID-19 pandemic some of them had established presences on streaming services and e-music shops. Mostly these are younger performers who have greater affinity for technology. However, almost all Macedonian musicians lack managerial teams who would take care of this aspect of their work, and the results are lacking.

GV: In March 2021 the Registry started the action #100subscribersMk to support Macedonian music in the digital sphere. What was it all about? 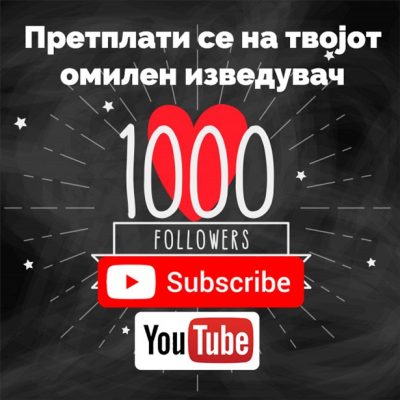 Online banner for #1000subscribersMk initiative reading “Subscribe to the channel of your favorite music performer.”

VB: The Registry started the “1000 subscribers” initiative based on the notion that prohibition of public events due to COVID-19 affects the performer's ability to earn a living. We urged citizens to subscribe to the YouTube channels of their favorite performers to help them monetize the viewing of their videos, which they view anyway.

The platform provides this option to earn money from ads shown on the videos only to channels with over 1000 subscribers and a minimum of 4000 hours of views over the last 12 months. Reaching the thousand subscribers threshold gives musicians a chance to start earning from every listen of their songs.

GV: How has piracy affected the development of the Macedonian music industry?

VB: As a service helping music publishers and authors, the VBU Music Registry has been stressing the importance of copyrights and performers rights as a source of income. We address both the businesses who are by law required to pay fees for playing music to collecting society ZAMP, and educate the general public, reaching out to all music fans. By various promotional actions we strive to explain to citizens how important it is to pay for the music they listen to everyday, while disregarding the effect of piracy on the livelihood of musicians.

GV: Over the past seven decades, music has been considered ‘the best ambassador’ of Macedonian culture abroad. Which current trends could have the biggest impact on domestic and foreign markets in the future?

VB: Young audiences, which are trend setters in music, lately seem to prefer trap music, a subgenre of hip hop music that originated in the Southern US in the 1990s, sung in local languages.

However, to achieve regional or international success, artists need to understand that making good music is not enough—one needs clear goals, good planning and marketing. Regardless of genre, an international management team is a must, or at least a local partner working on the target market.

As a genre, electronic music has a slight advantage because tracks without lyrics need not deal with language barriers.

For all genres where the text and vocals play a role, it’s almost necessary to make songs in English or the language of the country or region of the target market. For instance, successful artists like Leb i sol, Toše Proeski and Karolina Gočeva published songs in Serbian or Croatian to gain acceptance by audiences in the region of Yugoslavia. New generation performers like Yova, Toby and Station: Innermost sing in English. 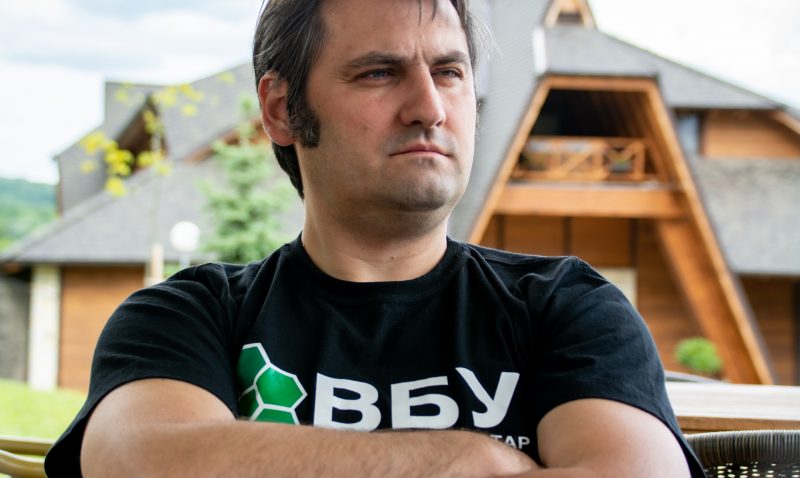 The VBU Music Registry has inspiring ambitions—Buraliev would like to document the music of the Balkans, and have the interface in regional languages. But, the resources available to a volunteer effort are limited, despite fundraising attempts.