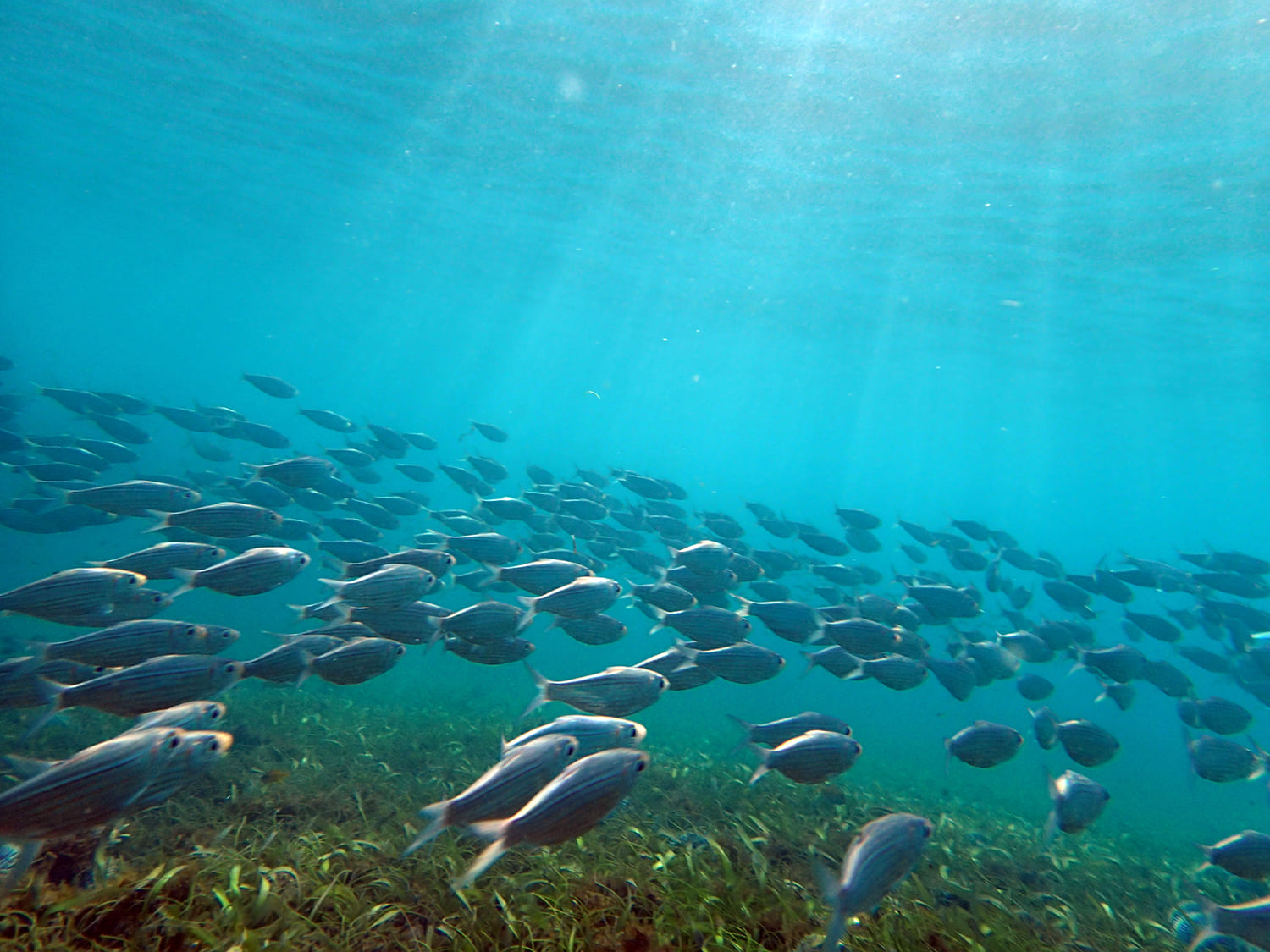 One of the most memorable parts of photographer Nadia Huggins’ childhood was swimming at Indian Bay, a narrow south coast beach, conveniently close to St. Vincent's capital, Kingstown, with clear, turquoise waters protected by offshore reefs. Through her photographic practice over the past six-plus years, she has continued to pay homage to the area, documenting the beach and its surrounding reef “in fine detail.” Her images convey a deep respect for, and intimacy with, the ocean, and its effect on the island's inhabitants and how they see themselves.

As she explains in one of her artist's statements, “Most people's experience with the sea occurs at eye level with the horizon and they are oblivious to what is happening below the surface. I am interested in the notion that ‘just because you can’t see something doesn’t mean it isn’t there’.” It is a perspective that seems especially poignant now, as there is a pending proposal to excavate a large portion of the reef—approximately 17,500 square feet (1,626 square metres) spanning from the shoreline to as far as 150 feet (45.72 metres) out to sea—and replace it with an artificial reef and imported sand, despite the fact that the area forms part of the island's proposed South Coast Marine Conservation Area.

Huggins says the monitoring data indicates that the coral reefs in this area are abundant, healthy, and vital to sustainable local fisheries. She is convinced that “there is value in preserving […] life in this zone” and that “regeneration is VERY possible at Indian Bay.” In the first of series of Facebook posts to draw attention to the situation, she explained:

Without human interference, I have witnessed firsthand elkhorn coral regrowing in key spots throughout the bay. Imagine what is possible if we actually put some real intentional effort into it and no, an artificial reef is not the solution.

I'm all for development and seeing my country thrive, but there is a very thin line between progress and preservation. Some things are sacred and meant to be protected for future generations. Reefs have the ability to regenerate. Even a dead reef serves a very important purpose in an ecosystem.

To prove her point, Huggins and a colleague went back into the water on July 4 to take more up-to-date photos and show that the reef has life in it yet:

The environmental assessment done by the developers claims that the reef at Indian Bay is dead. There isn't a single underwater image documenting this claim. Everything was shot from the sand. Sort of similar to how most people approach things here, never really delving into issues deeply enough to understand what's really going on, just viewing things at a surface level […] take a look at the images and let me know if this looks like a dead reef. 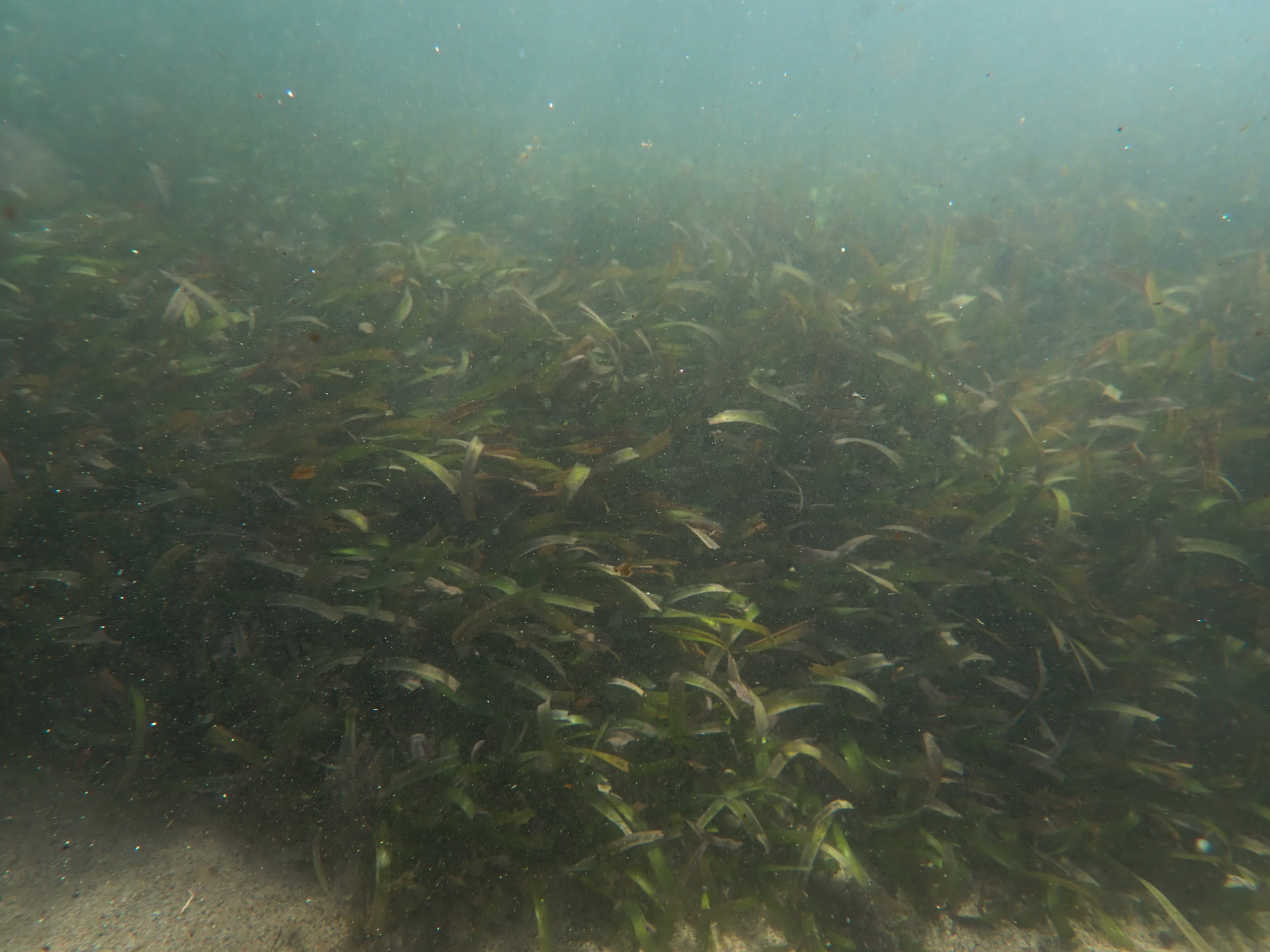 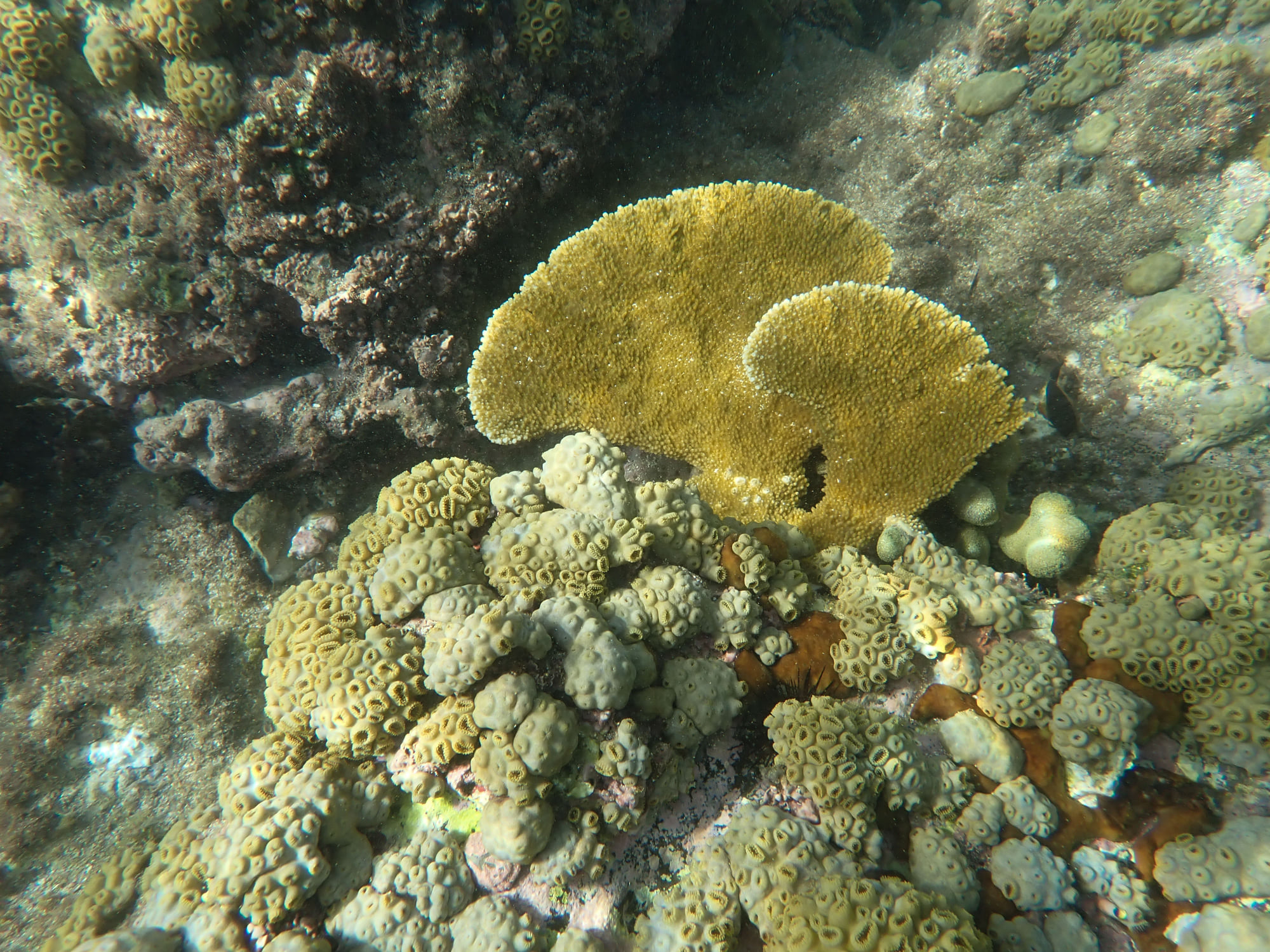 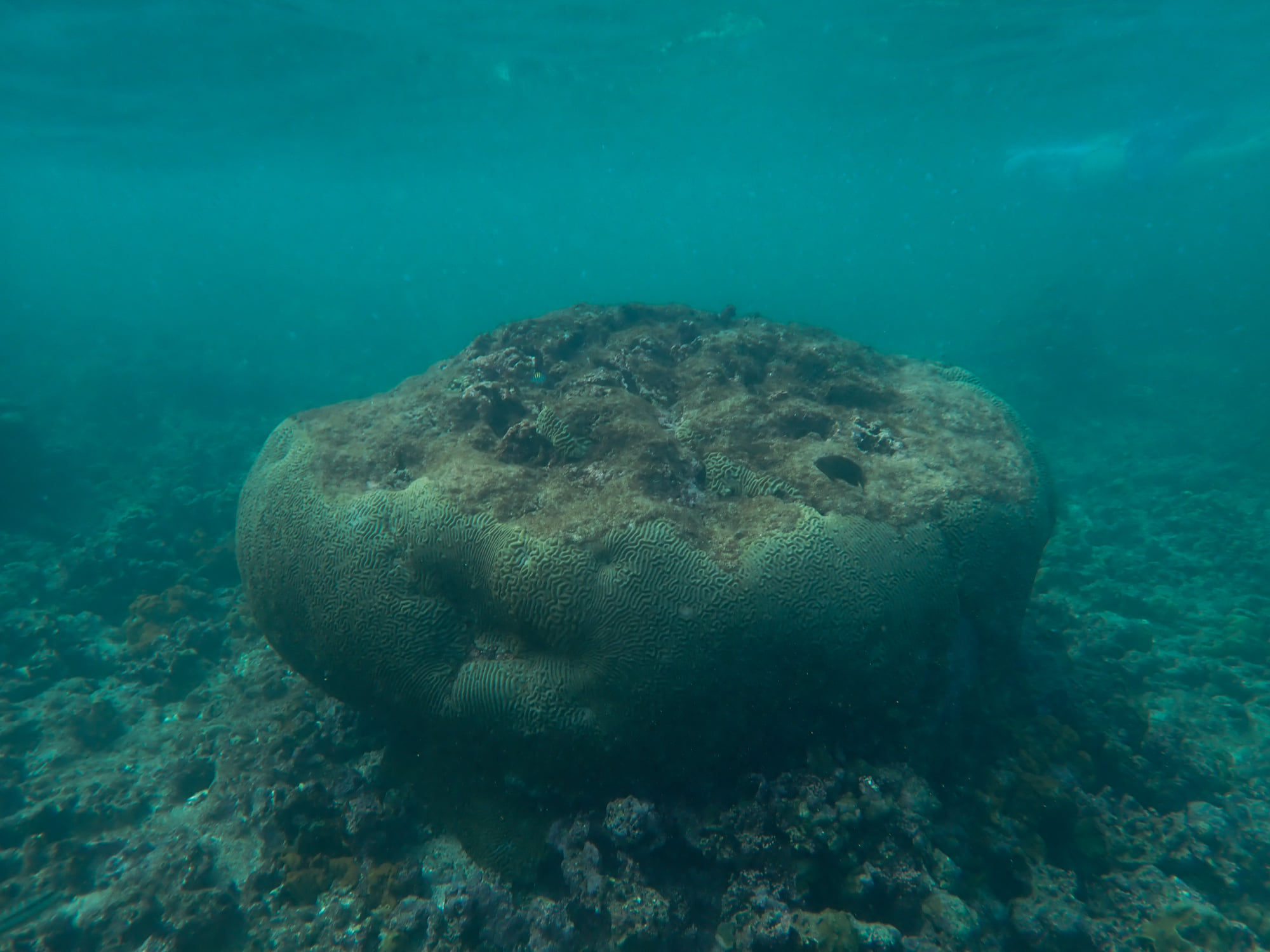 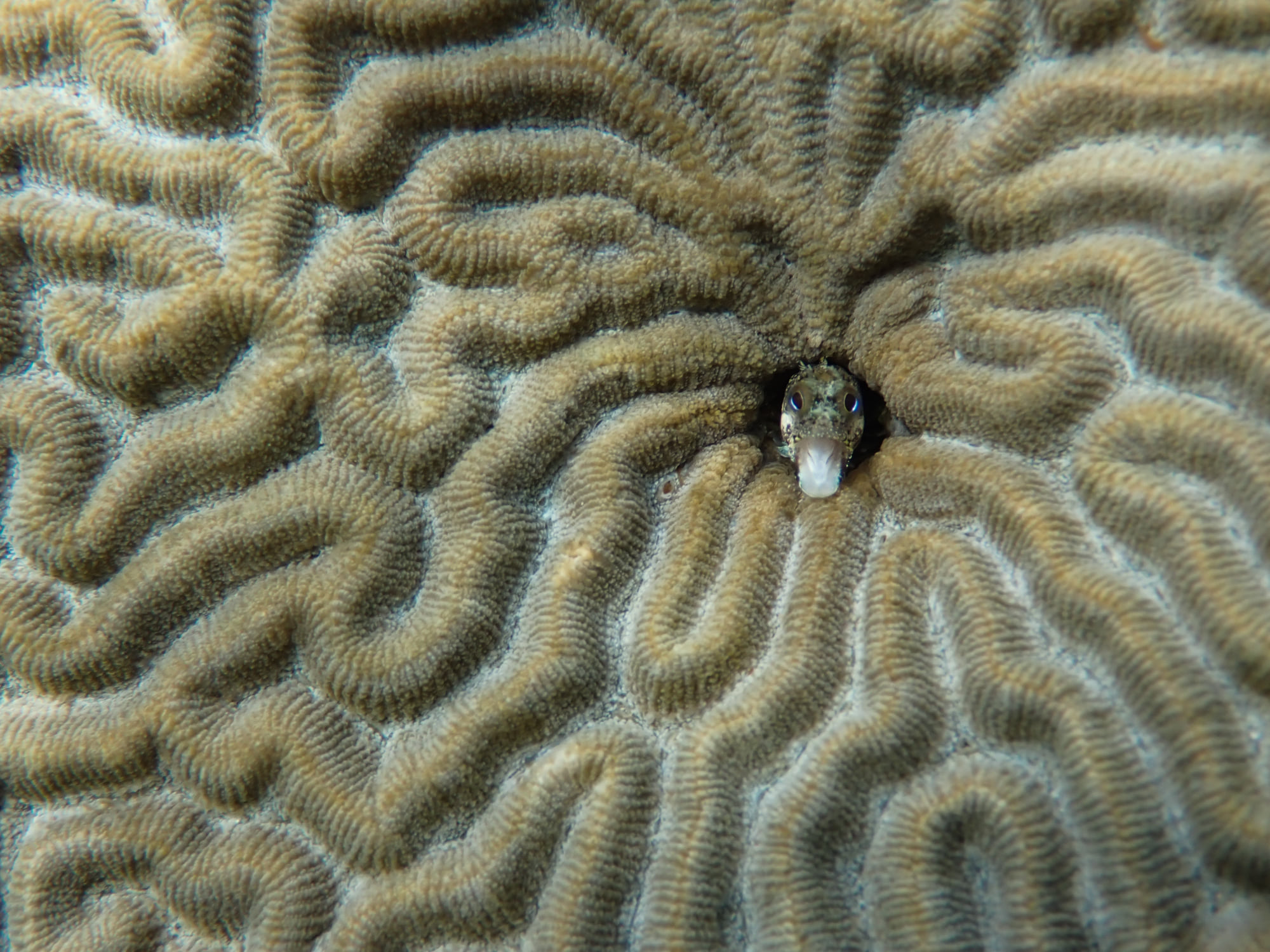 Marine creature peeping out from a brain coral, July 4, 2021. Photo by Nadia Huggins, used with permission. 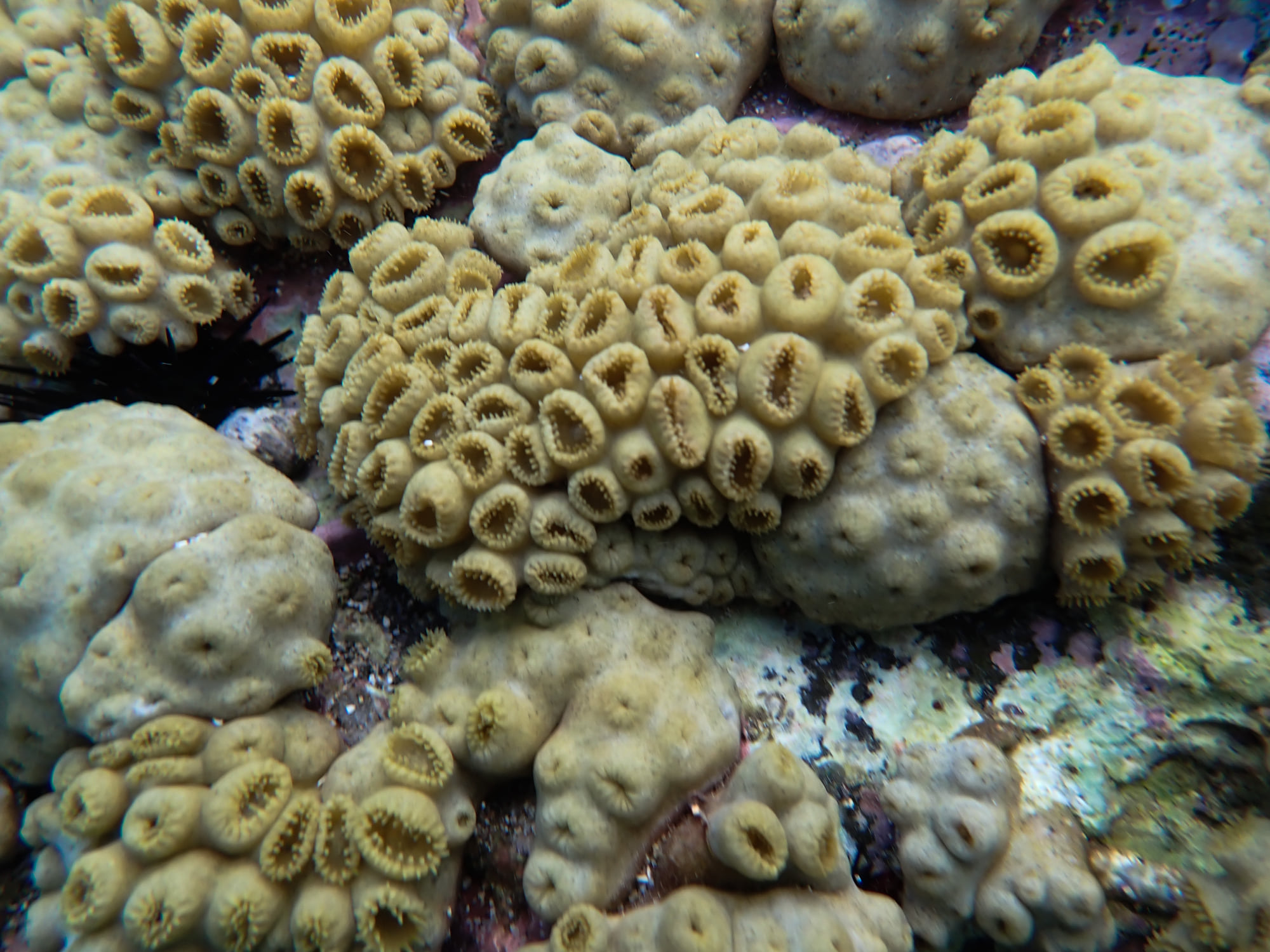 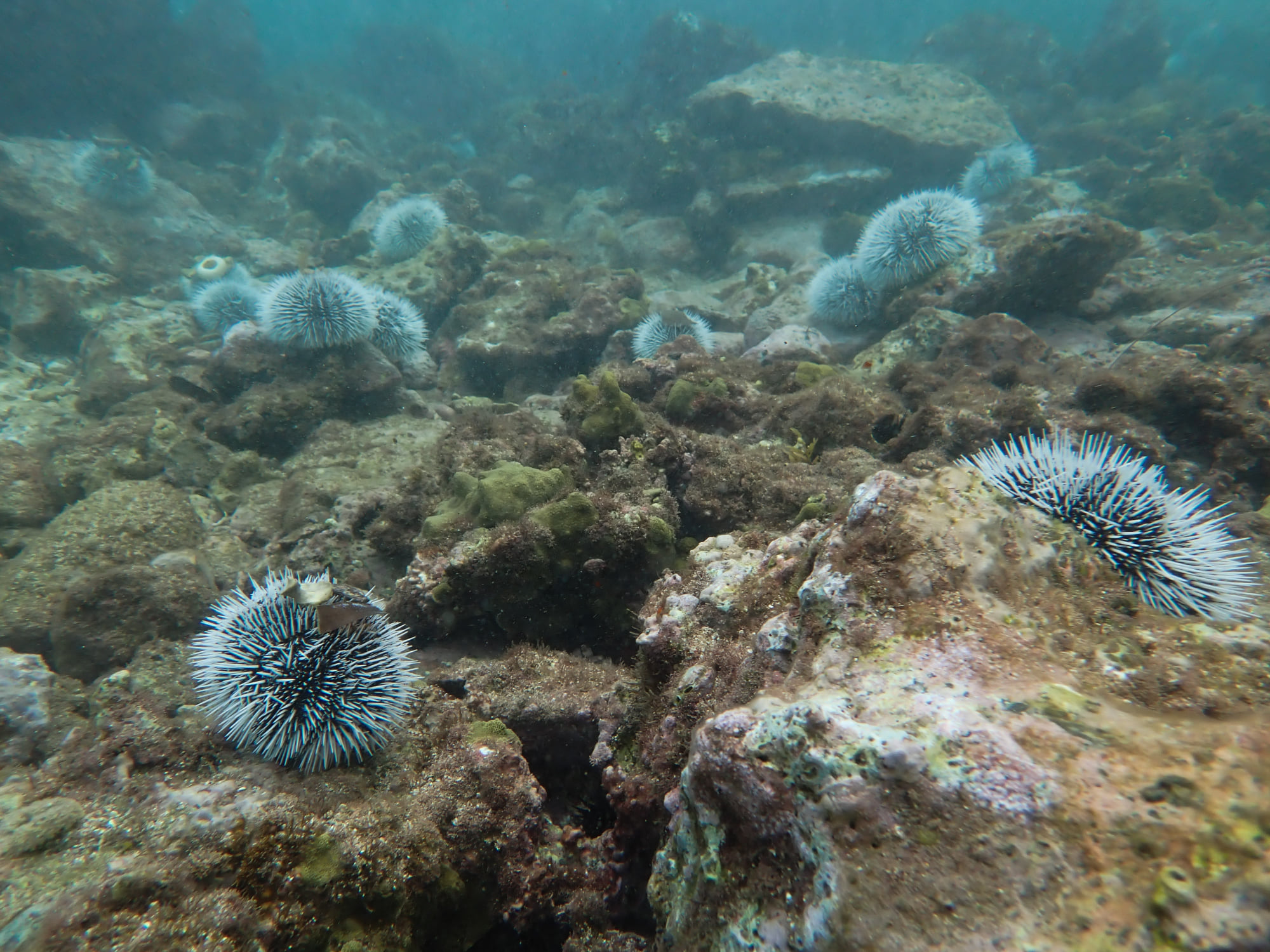 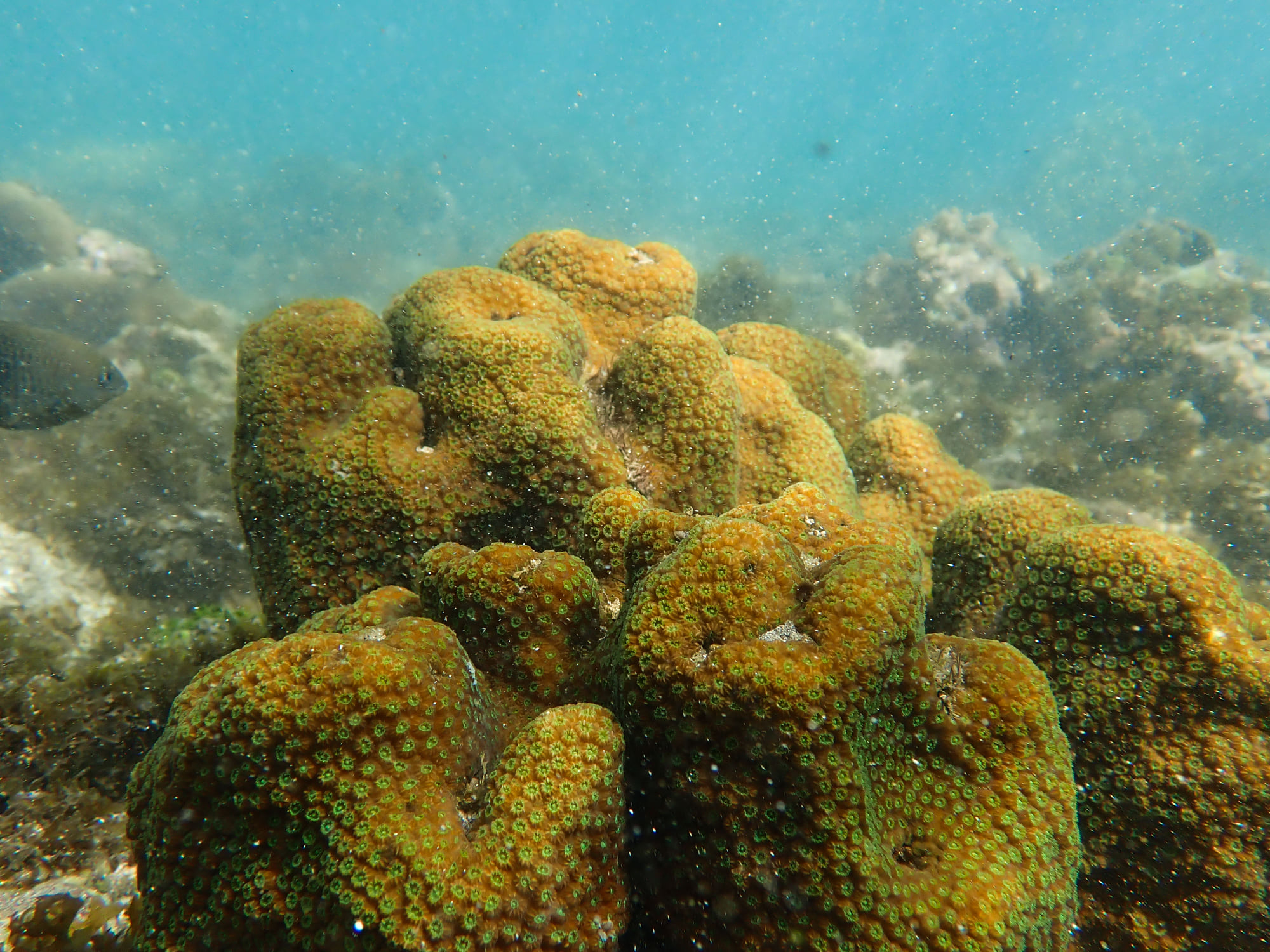 Making the point that “to the naked eye, a reef could look like a dead brown rock [because] the human eye can only see a very specific range of colours underwater,” Huggins posted comparative raw and filtered photos to better illustrate “the spectrum of colours that truly exist.” She also advised commenters on her post that they could visit the country's Ministry of Planning and Development and request to see the documents from the developer of La Vue Hotel and Beach Club.

Meanwhile, Facebook user Karen Palmer said it was “unacceptable” that “the ‘assessment’ that was submitted with the [developer's] request [was] done by one individual who is an Environmental Engineer, but has zero input from other experts such as Marine Biologists”:

It lacks data to support the argument that the reef is dead, lacks a structured plan and directive of how the work would be carried out, and makes no mention of how the contractors would be held accountable for correctly and responsibly carrying out any of the proposed actions, nor does it list an informed study of the negative impacts of removing coral reef. This is all aside from the fact that it is incredibly tone deaf and irresponsible for anyone to propose removal of live coral reef in this day and age, let alone a section of reef that is within a proposed marine park.

Mr. Adem Adem of A&A Capital Inc, who has an interest in the development, claimed—in reference to Huggins’ photos—that “the pictures you see are not the area where we will place an artificial reef; it is far from where we are planning on doing the cleaning.” He went on to say that “not in a million years would any investor of this project think or plan to remove live coral reef; I invite anyone to come and see, what is close to the shoreline is dead coral”. He also challenged Palmer's allegation that the group did not consult marine biologists:

We have hired marine biologists to come and see the area; they took several pictures at different times when the corals were exposed, and they are not live reef.

In response, Huggins posted a photograph alongside a readout of her camera's focal length metadata, countering:

For the background to be in focus so clearly (which is referred to as having a narrow depth of field) you have to be positioned very close to the shore as you can see from the coconut tree and tiny portion of the building.

The GPS coordinates of this coral are approximately 13.136802, -61.208856. It shows an elkhorn coral growing near the proposed zone of excavation.

“Mamaguy” is a Caribbean expression meaning to deceive with falsehoods.

In another Facebook post, Huggins shared shots of several critically endangered elkhorn coral colonies, all within the proposed evacuation zone, noting that the species “plays a critical role in acting as a wave breaker, especially during hurricane season—which we are in the midst of now.” 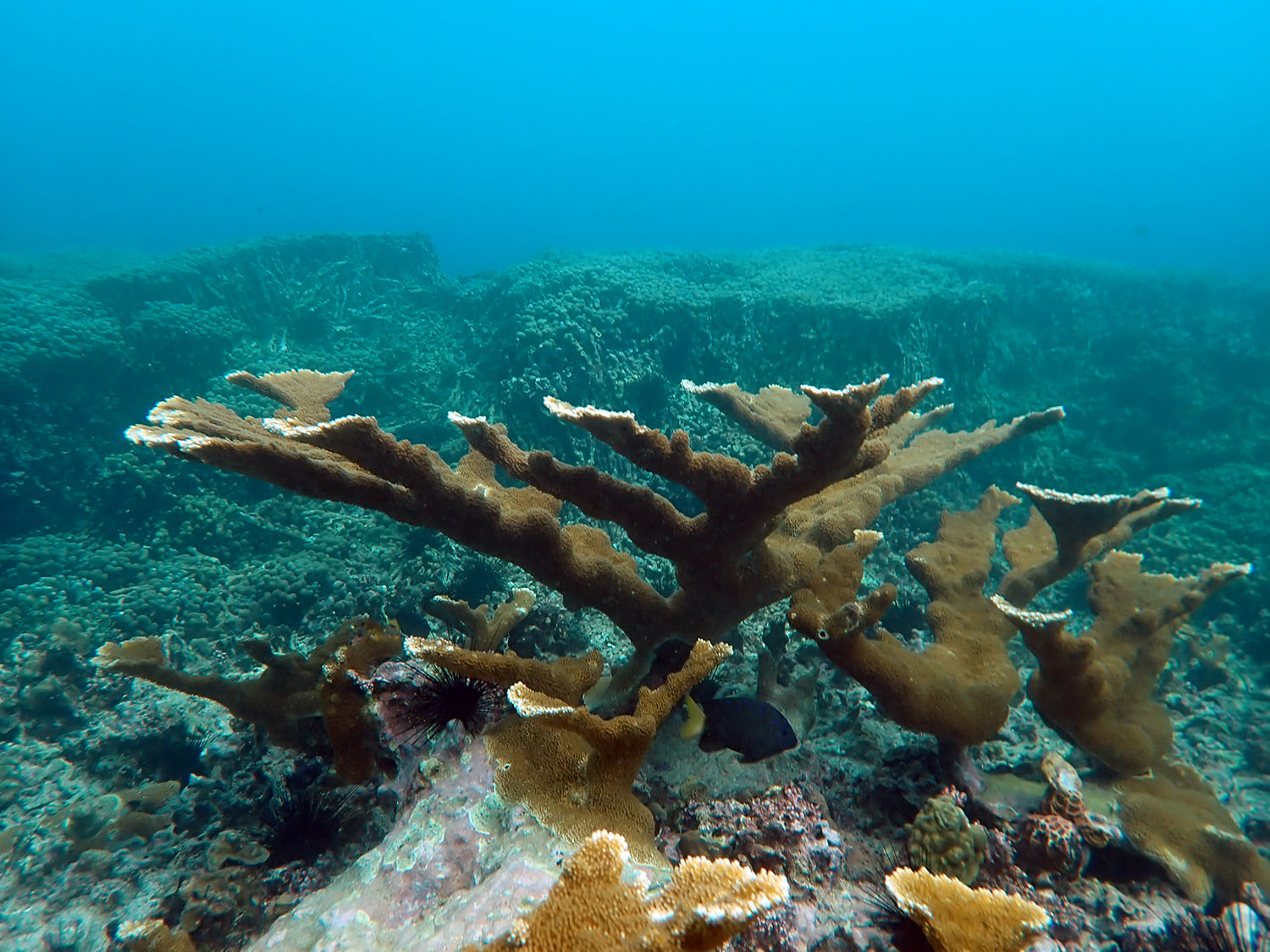 St. Vincent was one of the Caribbean territories affected by the recent passage of Elsa, the first major storm of the 2021 Atlantic hurricane season. 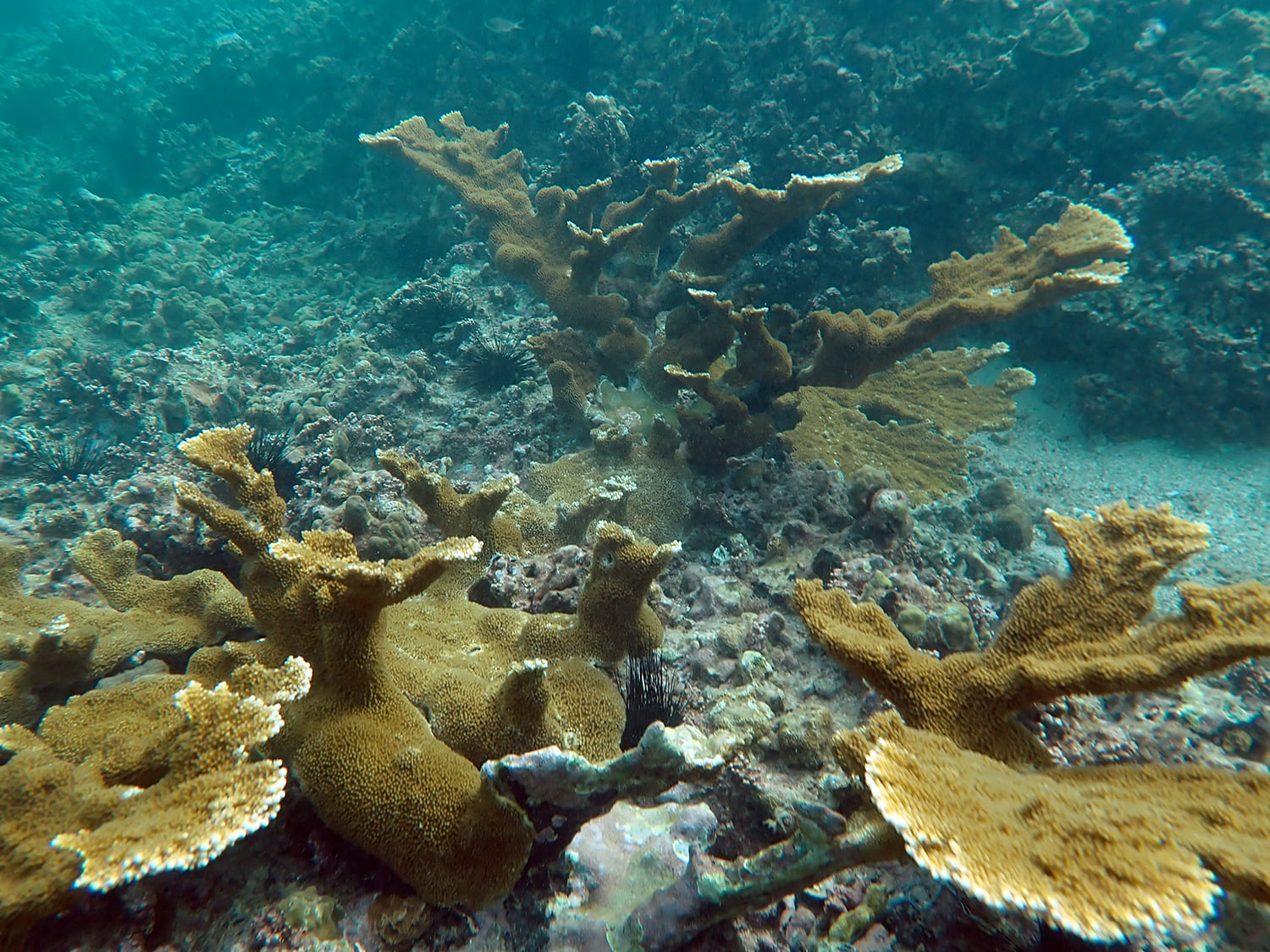 While local and regional social media users advocate for the preservation of the existing natural coral reef—even starting an online petition which, at the time of publishing, had already garnered close to 2,000 signatures—Indian Bay continues to teem with life beneath the surface: 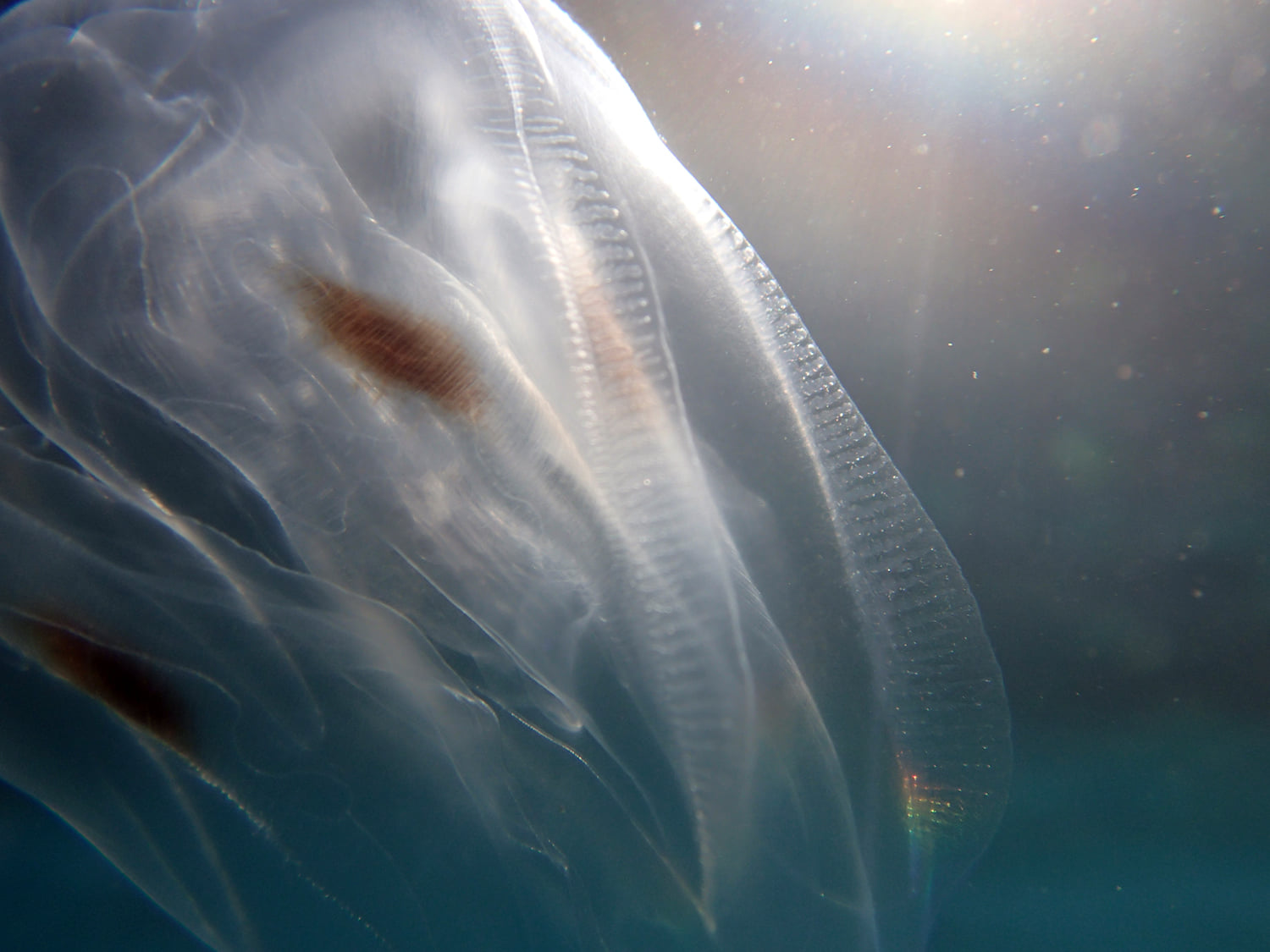 Jellyfish in motion at Indian Bay. Photo by Nadia Huggins, used with permission. 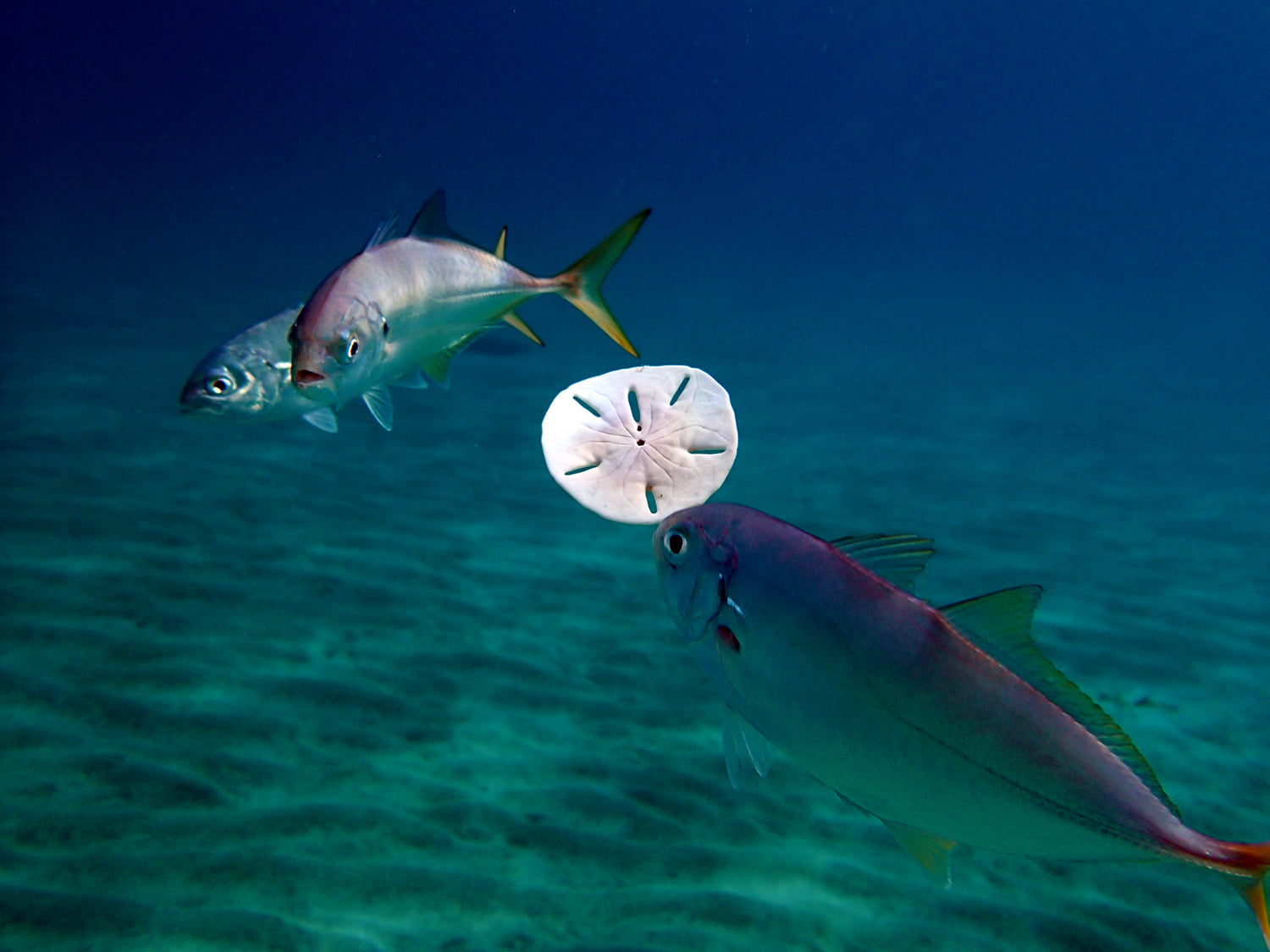 Fish playing with a sand dollar at Indian Bay. Photo by Nadia Huggins, used with permission. 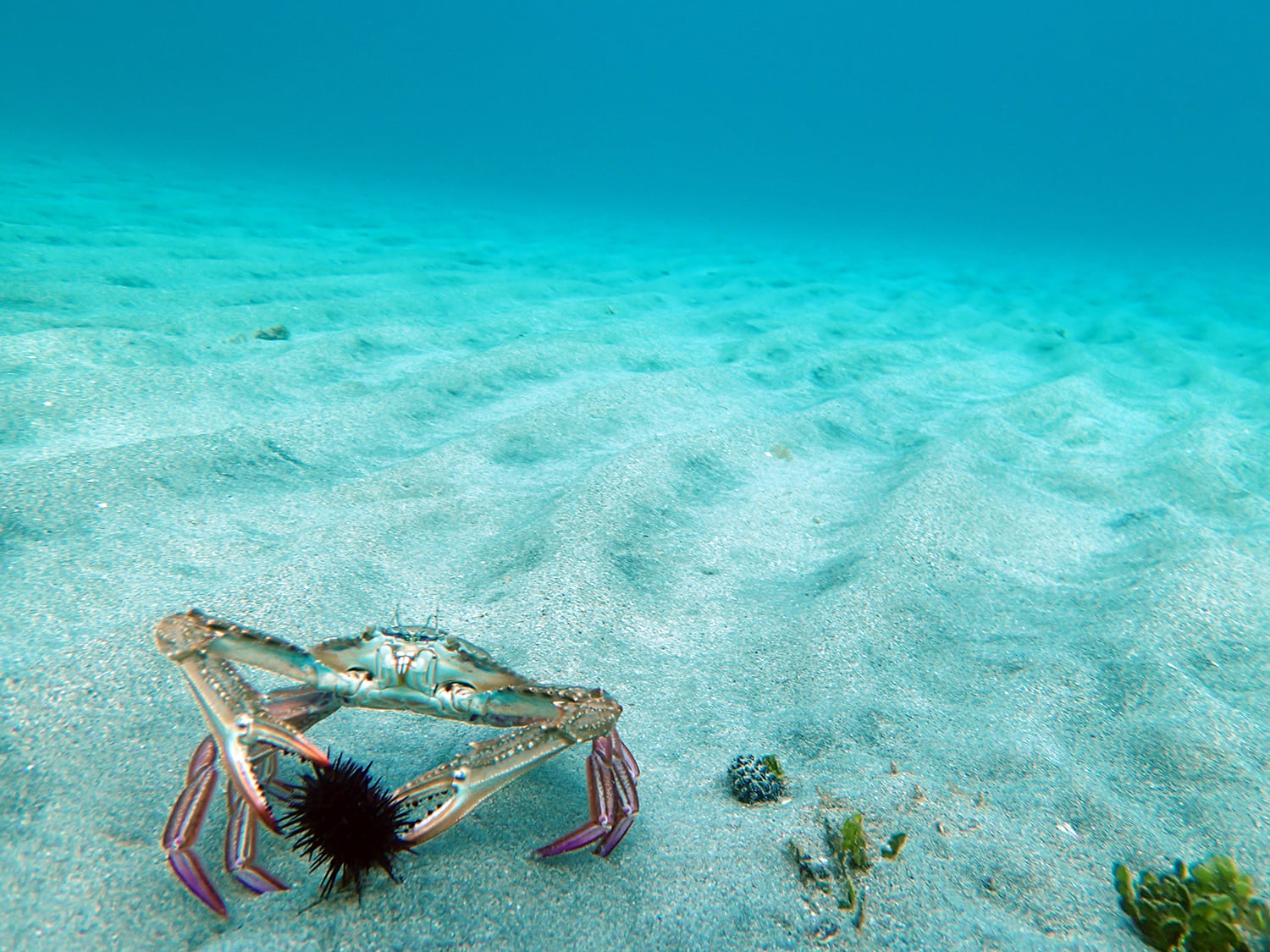 Crab about to dine on a sea urchin at Indian Bay. Photo by Nadia Huggins, used with permission. 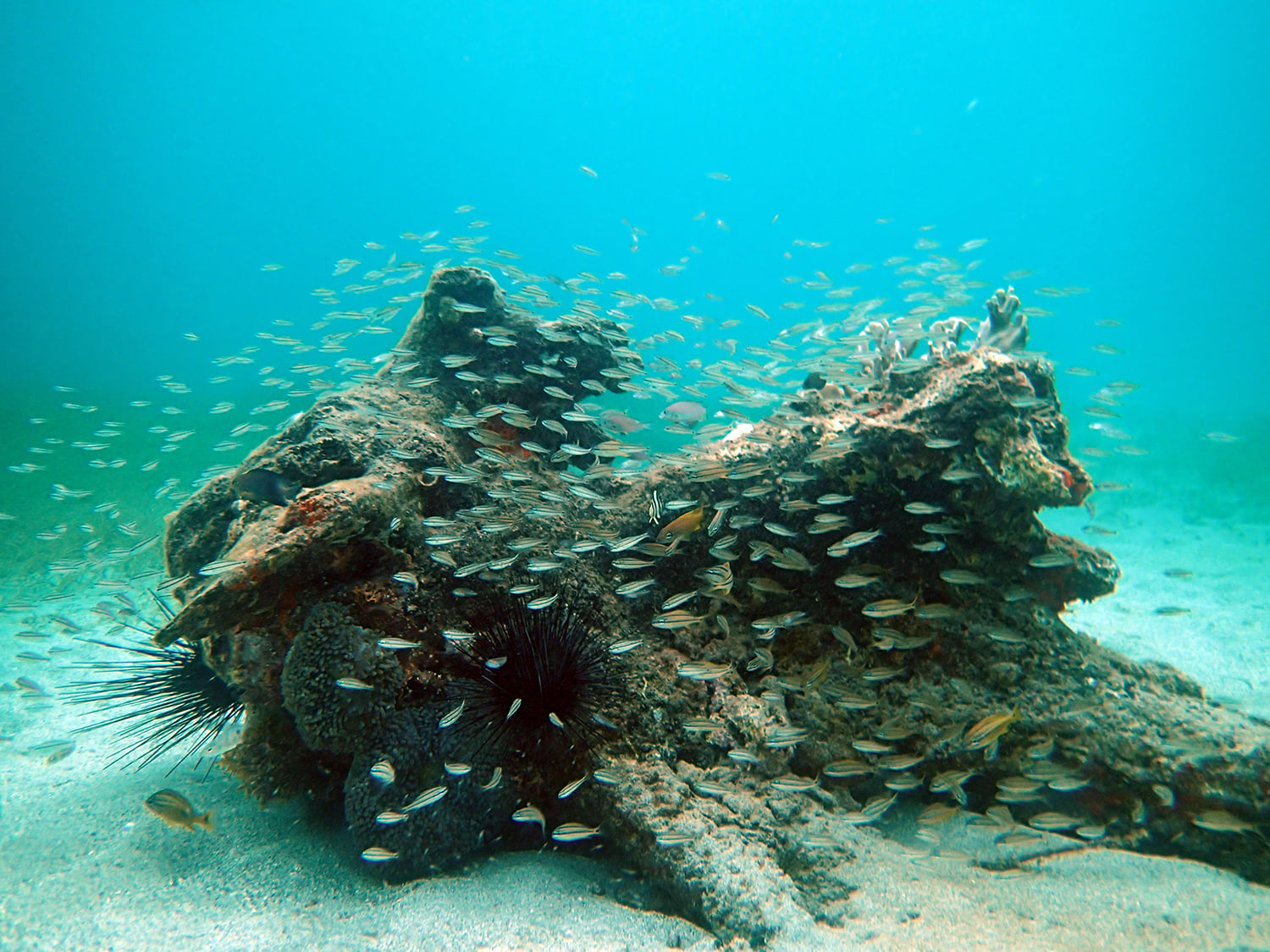 You can view more of Nadia's Indian Bay photographs here, here and here.