LIVE on July 13: Indigenous+Digital: How young people are revitalizing their native languages on the internet 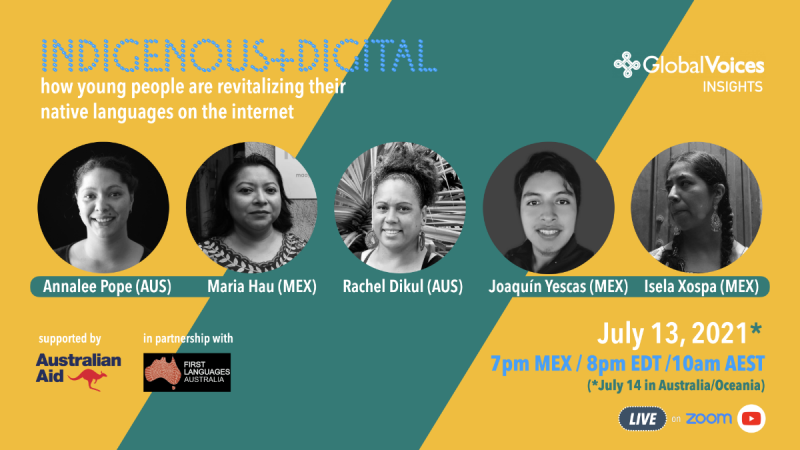 Around 40 percent of the more than 7,000 languages spoken globally are considered endangered, and with the start of the International Decade of Indigenous Languages only six months away, Indigenous communities around the world are reflecting upon both the challenges facing their languages, and on the actions they must take to preserve and revitalize them.

Among the strategies being employed by Indigenous communities is the use of digital technologies to enhance the learning and promotion of their languages. Creating a new generation of young speakers is especially crucial, as according to UNESCO's Language Vitality and Endangerment scale, intergenerational transmission and the use of a language in new domains are key factors in determining a language's health.

Join us on July 13 (July 14 for audiences in Oceania) for a special episode of our Global Voices Insights webinar series, bringing together language advocates and activists from Australia and Mexico around the topic “Indigenous+Digital: How young people are revitalizing their native languages on the internet.”

Organized by Global Voices’ Rising Voices initiative and First Languages Australia with the support of the Embassy of Australia in Mexico, the session will be live-streamed on YouTube starting at 7pm Mexico City time (CDT)/10am Sydney time (AEST). Click here to calculate the equivalent time in your time zone. Simultaneous interpretation will be available through the Zoom platform for registered participants.

The session is free and open to the public and will be live streamed on Zoom (registration required) and YouTube.

[Register for the webinar]

The webinar will feature the following:

Isela Xospa (Moderator): Isela is a designer, illustrator, and editor, originally from the Milpa Alta in the Nahua southeast region of Mexico City. She has worked for the Fondo de Cultura Económica, ILCE México and the David Bowie Archive, and is the founder of Ediciones Xospatronik, where she writes, illustrates, and edits books for children and young people in indigenous languages.

Annalee Pope: Annalee is Wakka Wakka woman from Central Queensland, Australia. Annalee began working to revive and strengthen Aboriginal languages in 2013, when she became the Coordinator of the Central Queensland Language Centre. Annalee joined First Languages Australia as a project officer on the Priority Languages Support Project, and then got involved with First languages Australia’s Young Champion program when it began in 2013. She has since become a mentor for young language champions.

Joaquín Yescas Martínez: Joaquín is a Zapoteco Xhidza man from Oaxaca, Mexico, co-founder of the Xhidza Collective and Coordinator of Xhidza Telecommunications, founder and coordinator of the Xhidza Penguin School, and technician and audiovisual producer at Radio Bëë Xhidza. Joaquín is an activist for indigenous languages, Free Software, free culture, hacker ethics and community philosophy.

Maria Lilia Hau Ucan: Maria is originally from Kinil, Yucatan, Mexico. A lawyer by training, she has worked as a teacher, speaker, translator, interpreter and collaborator on different projects with community and revitalization approaches focused on the Mayan language and culture.

Rachel Dikul Baker: Dikul is a Yolŋu woman from the Northern Territory in Australia. When she's not traveling the world running marathons, she mentors other young Yolŋu women, helping them build resilience and self-esteem and identify career pathways that fulfil their potential. Dikul’s role at ARDS Aboriginal Corporation involves documenting Yolŋu languages, cross-cultural facilitation and translation, broadcasting on Yolŋu Radio and language literacy activities. She speaks Djambarrbuyngu and four other Yolŋu languages.