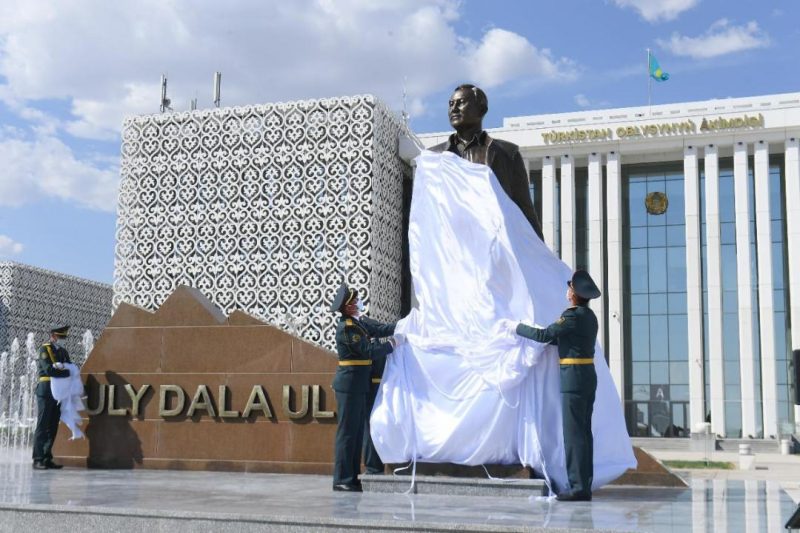 The unveiling of the statue of Nazarbayev in Turkistan, southern Kazakhstan. Photo: Regional government of Turkistan.

Driving from the newly-built airport of Turkistan into the city center, across the arid plains of southern Kazakhstan, features countless billboards with welcome signs and iconic imagery of the ancient Silk Road. Every two or three billboards, there will be one featuring a portrait of the country’s leader with one of his quotes in Kazakh.

To the potential surprise of first-time tourists, however, the leader in the portrait is not current President Kassym-Jomart Tokayev, but his predecessor, Nursultan Nazarbayev.

On 5 July, the day before his 81st birthday, a bronze statue of Nazarbayev was unveiled in the center of the city. At the same time, in the capital Nur-Sultan, Tokayev unveiled another statue of Nazarbayev, showing just how pervasive and unwavering is the cult of personality for the so-called “Leader of the Nation,” or Elbasy, who ruled the country for three decades. 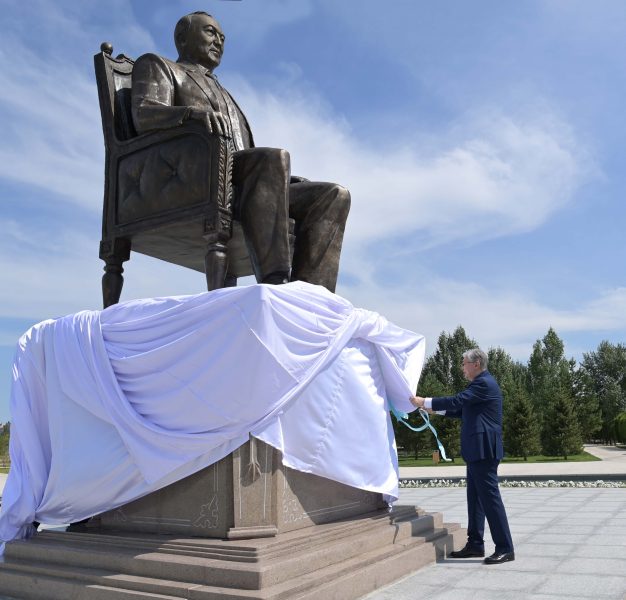 Tokayev unveils a new bronze statue of Nazarbayev in the capital Nur-Sultan. Photo: The website of the President of Kazakhstan. Akorda.kz

Turkistan, much like Nur-Sultan, was remodeled, rebuilt, and expanded under Nazarbayev’s command and supervision.

After the capital city was moved from the southern city of Almaty to the northern village of Tselinograd, the new seat of the government was renamed Astana. Its urban development encompassed glitzy new buildings and an entirely new expansion to the “left” side of the river Yesil. In March 2019, the day after Nazarbayev’s unexpected resignation, interim president Tokayev decreed that Astana be renamed Nur-Sultan in honor of the ex-president.

In Turkistan, the local population was already unhappy in May about the news of the erection of a new monument celebrating Nazarbayev. Rumors of the construction of a new bronze statue for the former leader had emerged in online media.

In addition, on 25 May, Bilal Çakıcı, deputy head of the International Organization of Turkic Culture, said in a public statement that the heritage of Elbasy should be celebrated in Turkistan, recently named “the spiritual capital of the Turkic world”.

I propose to erect in the center of the spiritual capital of the Turkic world, in the city of Turkistan, a monument to the person who initiated the revival of the city, as well as made an invaluable contribution to the implementation of the idea of ​​Turkic integration: Nursultan Abishevich Nazarbayev.

As often occurs, Nazarbayev publicly said he would prefer measures that ensure people’s prosperity, rather than monuments.

“This year Kazakhstan celebrates the 30th anniversary of its independence. And the main gift for all of us should not be monuments or renaming, but a high-quality implementation of systemic measures aimed at preserving unity, stability, ensuring the well-being and prosperity of our people,” his press service reported him as saying.

In the past, Nazarbayev only agreed for his name to be given to the Western-style university that was opened in the capital in 2010, according to his press service.

“Elbasy did not support this idea, nor others in the past. […] Nursultan Abishevich has already stated quite a few times that he does not need such signs of attention. […] The only time in history when he agreed to give his name to new projects was a university and intellectual schools,” Aidos Ukibai, his press secretary, said.

During a visit in May, Nazarbayev heralded the fast-paced development of Turkistan, saying it grew at a faster rate than the capital.

I dreamed of reviving the city in the year of the 1500th anniversary of Turkestan. Not even three years have passed since the creation of the Turkestan region and we built 257 [projects]. No one will forget the work done to build the capital. The revival of the city of Turkistan is also an unforgettable event.

The speed of development, however, does not guarantee the quality of construction, as residents noted after seeing parts of the walls of the new Karavansaray complex crumble.

The criticism was dismissed by the regional governor, Umirzak Shukeyev, as irrelevant.

Last year, the COVID-19 pandemic had canceled plans for a grandiose party for Nazarbayev’s 80th birthday. This year, the central and regional bureaucracies seem to have compensated with two statues.

Kazakhstan, in short, is increasingly Nazarbayev’s country. He credits himself with having built most of it from scratch.