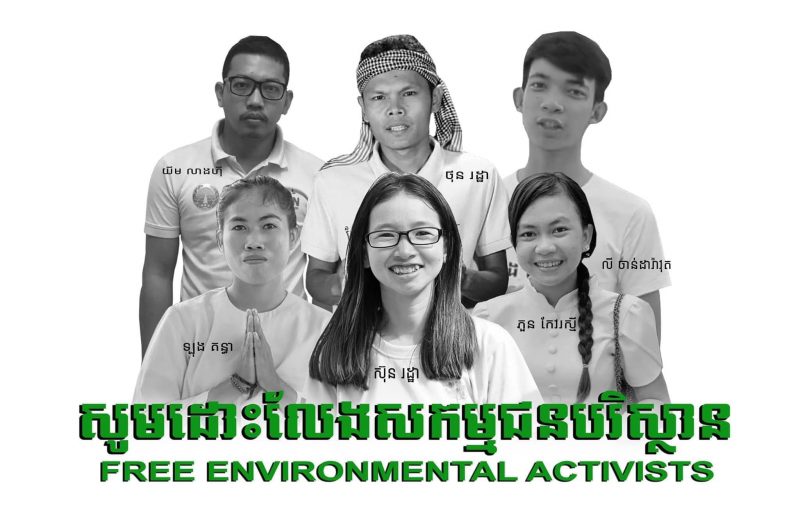 Human rights groups in and outside of Cambodia are calling for the immediate release of Mother Nature activists who were detained for filming a sewage flow near the Royal Palace.

Mother Nature members Sun Ratha 26, and Yim Leanghy 32, were arrested on June 16 while documenting the flow of raw sewage in the Tonle Sap river. Their colleague Ly Chandaravuth, 22, was arrested in Kandal province. They were charged with plotting an attack against the state and insulting the king. The group’s founder, Spanish citizen Alejandro Gonzalez-Davidson, was charged in absentia.

This is not the first time that Mother Nature members have faced prosecution for their advocacy. Authorities arrested Phoun Keo Reaksmey, 19, Thun Ratha, 29, and Long Kunthea, 22,  in September 2020 for planning a walk to the prime minister’s residence as part of a campaign opposing the planned privatization and reclamation of Boeung Tamok lake in Cambodia's capital city, Phnom Penh. The three were convicted in May.

Mother Nature is known for organizing social media campaigns and community action plans to highlight environmental issues. In 2015 it led a campaign that successfully prevented the construction of a mega-dam in the remote Areng Valley. It also exposed sand smuggling operations in the country’s coastal areas. These campaigns led to the deportation of Gonzalez-Davidson.

Whether it is cutting down trees in Prey Lang forest, illegal logging of rosewood in the Kravanh mountain range, dredging sand along the Mekong river or in Koh Kong, or mining for gold in Preah Vihear or Mondulkiri provinces, this will all now be more convenient for them.

Companies and individuals involved in illegal business activities are going to profit from these arrests.

But the Interior Ministry insisted that Mother Nature is only using the environmental issue to hide its real goal of conspiring to topple the government.

This action is a plan to incite, to ignite national division, and [it] violated the Cambodian Constitution with the aim of causing social insecurity and impacting national stability such that the competent authorities must take legal action.

Cambodian human rights groups have condemned the arrests and filing of charges against the young members of Mother Nature. Sopheap Chak of the Cambodian Center for Human Rights said the work of Mother Nature should be welcomed by authorities:

The work that activists undertake should be praised rather than hampered, and their voices should be listened to rather than silenced.

Following the judicial harassment that multiple members of the environmental group Mother Nature Cambodia have recently faced, CCHR calls for the immediate release of all environmental activists detained for their activism and for charges against them to be dropped. #Cambodia pic.twitter.com/T2PRybbe5p

Civil society groups have signed a joint statement expressing alarm over the arrests:

Advocating for human rights and demanding that the authorities protect the environment are not crimes, and jailing the country’s future generation of environmental defenders imperils us all.

They also called out the courts for indicting activists and placing peaceful dissenters in overcrowded jails during a pandemic:

The courts have shown little inclination to release people convicted for non-violent crimes early or on bail, but instead continue to incarcerate peaceful activists, putting their health at risk.

We urge the authorities to ensure that human rights and civil society organizations in Cambodia can operate without fear and intimidation and that their rights to freedom of expression, peaceful assembly and association are protected and respected.

So far, authorities have not presented evidence as to why the mere documentation of a drainpipe runoff in a river constitutes a crime. A pro-government online news site has uploaded a video that appears to be a private Zoom meeting of Mother Nature members who were discussing the country’s politics.

It is alarming that the authorities appear to be engaging in unlawful surveillance of environmental activists in order to concoct evidence of far-fetched conspiracies. Time and time again the Cambodian government has characterized critics of the government as rebels and conspirators, and painted peaceful activism as a crime.

Sebastian Strangio of The Diplomat wrote about the paranoia of the ruling Cambodian People's Party (CPP) which maliciously equate peaceful activism with treason and political destabilization:

Yet fear of public scrutiny alone fails to explain the overkill of the charges levied against the three Mother Nature environmentalists, and the government’s grim determination to stamp out the group’s activities. This instead reflects the CPP government’s profound paranoia about foreign influence, and its tendency to conflate independent civil society activism on any issue with attempts to engineer the overthrow of the present government.

If convicted, the arrested Mother Nature members could be in jail for five to ten years.