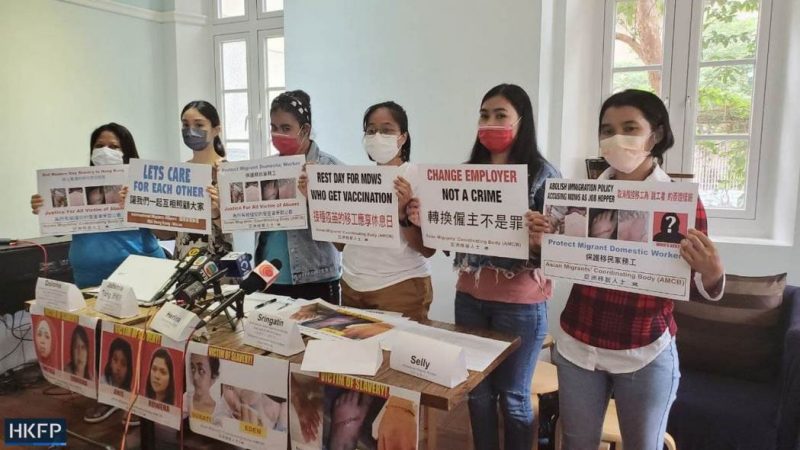 The following post was written by Selina Cheng and published on Hong Kong Free Press on June 29, 2021. It is republished on Global Voices under a content partnership agreement.

Domestic workers in Hong Kong have faced increased levels of physical and sexual abuse—including rape—in the wake of official advice that they remain under lockdown at home to prevent the spread of the coronavirus.

According to rights groups, the number of cases of severe physical abuse by Hong Kong employers, including beatings, groping, rape, long work hours and sleep deprivation, have risen significantly as a result of COVID-19 pandemic restrictions imposed on domestic workers.

The plight of those suffering abuse while following government advice to stay at home was exacerbated by the fact that some employers even barred them leaving home on their days off, effectively preventing them from seeking help.

Putri, 29, from Indonesia, took up her first overseas job in Hong Kong in 2019. Just days after she started working for a new employer in Yuen Long in February of this year, she was asked by her female boss to give her husband a massage, during which he groped her breasts. In the following days, he tried to rape her on the living room sofa, where she slept at night.

Putri told a press conference on July 2 that she fought back against the husband's advances.

“I was very scared and [was] shaking at that time,” she said in a statement in Bahasa Indonesia, her native language, via a video call in which her identity was protected. “I wanted to leave but did not know where to seek help,” she said.

Putri said the same man raped her twice at around 3 a.m. one day and again the next morning. “I tried to stop him, but he was very strong,” she said. She subsequently asked for permission to sleep on the roof of the house, a request that was initially rejected by the wife. But she was later given a mattress and some blankets to do so.

Putri was also required to work from 5:30 a.m. until midnight because the living room sofa was her bed, and she was only able to sleep after her employers finished watching television in the evening.

In March, Putri discovered she was pregnant, and the wife of the household took her to a doctor. She said her employers told her to either get an abortion, or face losing her job. Putri refused the abortion and sought help from an Indonesian rights group in late April, during her first day off in three months.

The 44-year-old male employer was arrested following a report to the police on May 19, police said. The man was taken into custody and was charged with three counts of indecent assault and one count of rape before a court two days later.

Government measures made it worse

Hong Kong's domestic workers have endured long work hours and lost days off during the COVID-19 pandemic. They have also been subjected to mandatory COVID-19 tests, a requirement rights activists describe as discriminatory.

Earlier this year, the Secretary for Labour and Welfare, Law Chi-kwong, urged migrant domestic workers to remain at their employers’ homes on their rest days. Pro-establishment legislator Elizabeth Quat went as far as to propose a lockdown for domestic workers even during their holidays.

“The Hong Kong government telling us to stay at home made the situation worse: employers used this to imprison and enslave foreign domestic workers,” said Sringatin, an Indonesian activist from AMCB.

In another case of abuse, two Indonesian women, Herlina and Uun, were employed in a household in Tuen Mun that had a total of four domestic workers. Each of the women was assigned to work on a separate floor of a four-storey house and were forbidden to talk to each other. The four were tasked with taking care of two adults, six children, 75 dogs, eight turtles and eight aquariums and bird cages.

Herlina suffered repeated beatings with fishing rods from her male employer. She was sometimes deprived of sleep as punishment. “[S]ince February 2020 during the Covid-19 pandemic, we were prohibited from going outside and required to rest at home. We were only allowed to leave the house to buy food or send money,” Herlina said.

Police said it received a report of assault using fishing gear in Tuen Mun at about 5 a.m. on June 24. A 47-year-old man was arrested on suspicion of common assault and was released on bail on June 29.

In April, Herlina was asked to move three large aquariums but was forbidden from getting help from her co-workers. One of the aquariums fell during the move, resulting in a deep cut on Herlina's left foot. She was given antibiotics, but it was not until the next day that she was taken to hospital, where she received nine stitches, her statement said.

Two other women, Selly (pseudonym) and Eden were subjected to other forms of physical abuse and sexual harassment before they sought assistance from rights groups.

All five women have left their employers’ households and are living in shelters provided by Mission for Migrant Workers and AMCB, their representatives said. Herlina and Uun’s male employer was arrested on June 27 for common assault, the NGOs said.

“All other workers in Hong Kong do not have to live in fear,” a statement issued by the Asian Migrants’ Coordinating Body said. “Instead, if their job is not safe, they can give notice and find safer work conditions. [Migrant domestic workers] deserve the same rights.”