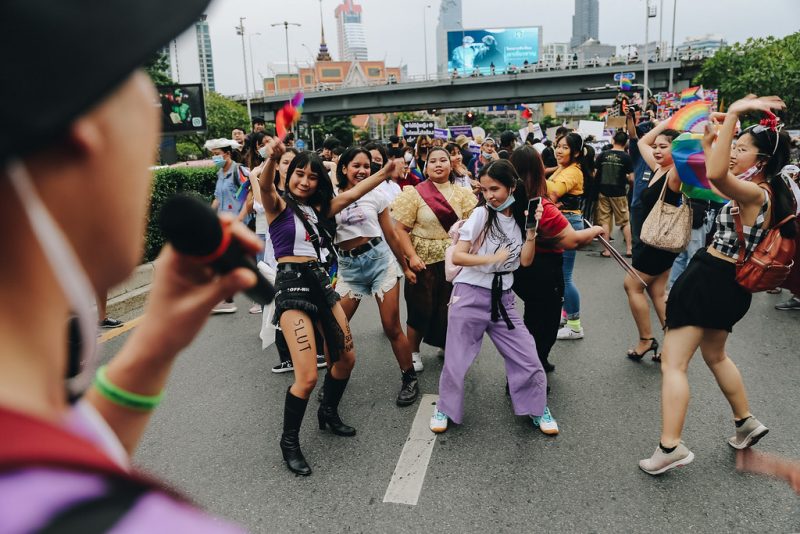 Mimi (centre front) during the November 2020 Pride parade in Bangkok. Photo and caption from Prachatai. Used with permission

The original version of this article was published by Prachatai, an independent news site in Thailand. Interviews were conducted by Rattanaporn Khamenkit and Natthaphon Panudomlak, and the article was written by Anna Lawattanatrakul. This edited version is republished by Global Voices as part of a content-sharing agreement.

Mimi, 17, is a gender equality activist who has been charged with violating the Emergency Decree and the Public Assembly Act for giving a speech during a protest at the Ratchaprasong Intersection on October 25, 2020.

A former member of the gender equality activist group Feminist’s Liberation Front and one of the creators of the Thai version of the Feminist anthem “A Rapist in Your Path,” Mimi now runs the Twitter and Instagram pages of Feminist FooFoo, which published content about gender justice.

Prachatai spoke to Mimi (who uses the pronouns they/them) about the beginnings of their activism, life after facing charges for political expression, and the importance of gender justice in the pro-democracy movement.

Mimi said their parents taught them about democracy when they were young, but they did not start joining political activities until they learned of the disappearance of Wanchalearm Satsaksit, a Thai activist in exile who was abducted from his condominium in Phnom Penh on June 4, 2020 and is still missing over a year later.

Wanchalearm’s disappearance triggered a wave of protests against enforced disappearances, which became one of the central issues of the pro-democracy movement beginning in July 2020. Mimi was one of the young people who felt the need to do something at the time.

Even though some say it is inappropriate for young people to protest, Mimi believes it is a good thing that young people are taking a stand, as this is a way of saying that they also have rights and a voice. They said that young people are often excluded from the decision-making process and are prevented from speaking out about issues which affect them.

I feel that, if we are all people, we shouldn’t judge other people’s experiences through our own experience. When adults say that they know better, I think that’s insulting. It diminishes our demands and diminishes our values. I think that, even if they are in kindergarten or in primary school, they have the same right to complain that they are tired. They have the right to say that their quality of life is not good.

Mimi began their activism by working with the Feminist’s Liberation Front and the Free Queer and Non-binary group. They were also one of the creators of the Thai version of the Chilean feminist anthem “A Rapist in Your Path” (Un Violador en Tu Camino).

The first performance of “A Rapist in Your Path” in Thai took place during the Pride parade in Bangkok on 7 November 2020, organized by the Feminist’s Liberation Front, then known as the Women for Freedom and Democracy group, and the gender equality activist group Seri Toey Plus. The lyrics were then modified and used in other protests to speak out about social issues, including abortion rights, freedom of expression, the judicial process, and human rights violations in schools.

Mimi now runs the Twitter and Instagram pages Feminist FooFoo, which publish content about gender equality and LGBTQ rights, and said that they would continue to campaign for gender justice.

Life after an Emergency Decree charge

Mimi is facing charges for violating the Emergency Decree and the Public Assembly Act, after they gave a speech on gender justice and criticized the judicial process during the protest at the Ratchaprasong Intersection on October 25, 2020.

They told reporters that after they reported to Lumpini Police Station on January 13, 2021 that the police initially thought the speaker was student activist Patsaravalee Tanakitvibulpon, but later found out that the speaker was Mimi and charged them instead.

Mimi says their experience with the police and in juvenile detention have taught them that state officials have no understanding how to handle the pressing of charges against a minor, and lack gender sensitivity.

As soon as they saw me, they immediately marked me down as ‘Miss,’ even though I might identify as Mx, or as someone who isn’t a Miss or Mister. I identify as non-binary, but they didn’t care about my gender identity, and what was so shocking to me was that they have never heard of LGBT.

The juvenile detention centre lacks understanding in so many issues. They lack understanding in the issues we’re talking about. They didn’t understand what feminists are. They didn’t understand what LGBT is. I don’t expect that everyone must know about these issues, because most people who know about these issues are people who have the right to access education, but at least I think that the juvenile detention centre, which works with young people, I think they should know.

Mimi said that the legal process has been time-consuming, as they have to meet with lawyers and report to the police. They are often forced to miss classes and are not able to manage their time. They also said that they felt unsafe at school; even though they have not been harassed, they are worried about how they are viewed and what others would say.

Mimi’s case is still being processed by the public prosecutor, and the formalities have already been deferred twice. 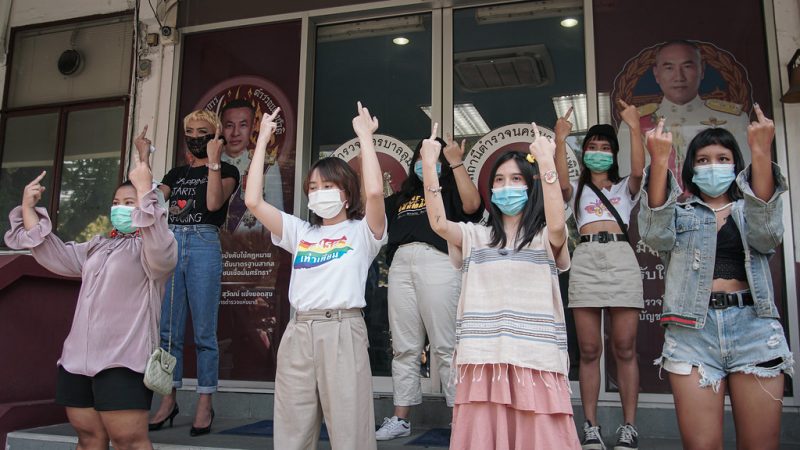 Mimi (front, second from right) with other activists in front of the Lumpini Police Station. Photo and caption from Prachatai.

Leaving no one behind

For Mimi, even though the feminist movement began with women who demanded the right to vote or to work and were often expected to take care of the home and become mothers, the current feminist movement is calling for justice for everyone, not only those who were assigned female at birth. The feminist movement also focuses on getting beyond gender binarity and increasing diversity. Mimi is also trying to understand the concept of intersectional feminism, which they understand to mean that oppression is due not only to gender but also other factors such as class or political beliefs.

Mimi said that another critical issue in the feminist movement is dismantling the patriarchal structure of society, which they believe is not an easy task.

I think we won’t be rid of [patriarchy] so easily, because it’s been around for a thousand years. Democracy has only been around for a hundred years. I think that even though we get to have the vote and have democracy, I think we still won’t be able to destroy patriarchal culture, so we have to continue complaining about what we feel is injustice.

Mimi would like to see a society that cares about physical, emotional, and spiritual well-being, which would allow people in the society to live happily. They want to see a society without discrimination, which understands diversity, whether it is about gender identity, gender expression, or sexual orientation.

In our society right now, there is the binary framework. There is a male frame and a female frame, which are the frames within the framework, but I think that’s not all there is. Men are not the first gender, women are not the second gender, and LGBT are not the third gender. Everyone is a gender, no matter how you identify,” Mimi said.

To be free from discrimination, I think that is human right.