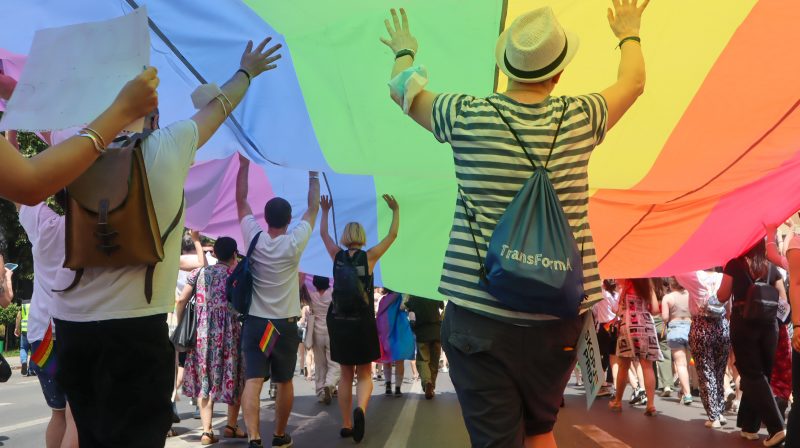 The second Pride Parade in Skopje, the capital of North Macedonia, took place on the 26th of June, under the motto “Beyond the Walls.”

After a one-year pause due to the pandemic, over a thousand supporters gathered in the city center this year and, in their own words, protested oppressive policies, homophobia and transphobia, but, at the same time, celebrated the hope for a society with greater solidarity and justice. 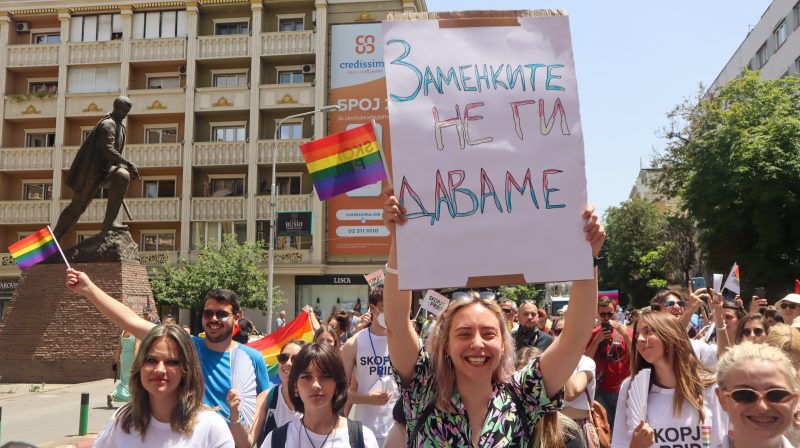 “We won't give up our adjectives” banner at Skopje Pride 2021. Photo by Goshe Nikolov/Meta.mk, used with permission.

The high temperatures didn’t prevent the the LGBTQI+ community and their allies from coming out and raising their voices in celebration of differences, love, equality, and freedom.

With flags, banners and music, the Pride Parade started at 10 o’clock at the Zhena Borec Park in front of the Parliament, and, from there, the attendees marched through the city center toward the City Park, where the later the festivities (an open air party with a concert and dancing) took place. 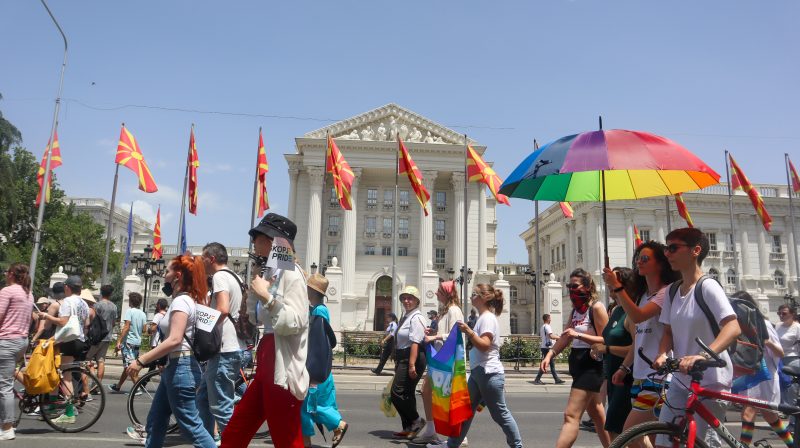 The Skopje Pride March passing in front of the seat of Government of the Republic of North Macedonia. Photo by Goshe Nikolov/Meta.mk, used with permission.

The supporters sent the message through their banners that, among other things, there will be “no more hiding” and that “beauty is in the diversity.”

Let us not stigmatize and isolate people because of their sexual orientation. Everyone has the right to choose. #BeyondTheWalls @SkopjePride pic.twitter.com/pZt4ovK5i2

The Parade’s organizers stressed that the pandemic has shown everyone what it’s like to be living within four walls and that everyone has learned how the LGBTQI+ community has been closed in and forced to live behind walls, but not by their own choice. 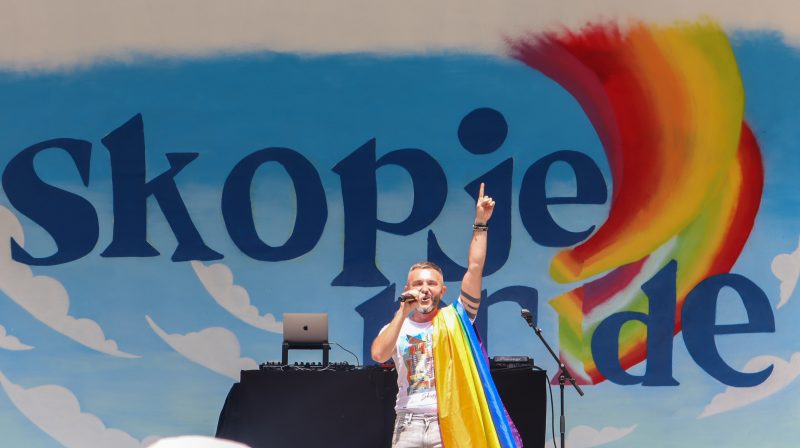 “Be yourselves, be honest, full of love and energy and there won't be any walls,” said Vasil Garvanliev, Macedonian representative to Eurovision Song Contest 2021, who opened the entertainment part of Skopje Pride 2021. Photo: Goshe Nikolov/Meta.mk, used with permission.

For years, members of the LGBTQI+ community have been physically attacked, and been victims of domestic violence, hate speech and threats, but the public prosecutors, the police and other institutions kept silent, said Elena Petrovska of the Coalition Margins, which is part of the Skopje Pride’s organizing board.

This silence wants to erase us and is inspiring violence against us and that is why we are demanding a substantial change in the procedures for these acts and prosecution for them, just like for any other citizen. We are not citizens of a lower rank. The Pride Month is returning us a little bit in the past, it makes us see what we have achieved, the advancement, and how to continue onward.

She stated that the Gender Recognition Act must be urgently adopted because “the human rights aren’t debatable and no one is obliged to prove their own humanity in order to be protected by the system.”

Petrovska also addressed  right-wing policies and the propaganda spreading false information, which, she said, want to twist the image of the members of the LGBTQI+ community in  society and to present them as pests. She stressed:

The bigger and stronger this propaganda and attacks are, the more our resistance will grow stronger. None of us mustn’t be reduced to ideology, we are human beings that deserve equality and respect. No one and nothing will prevent us in our fight, will not take away our energy and derail us from the road to our freedom, as we have love and power. 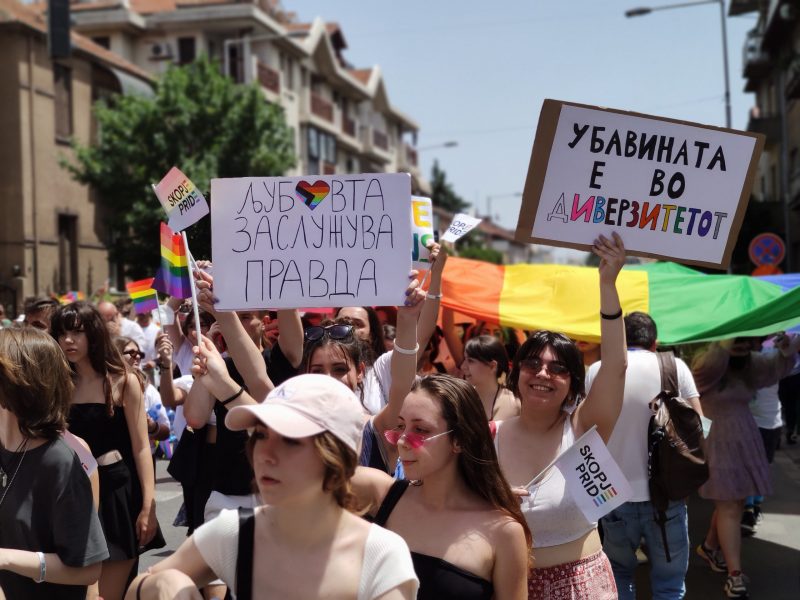 “Love deserves justice” and “Beauty is in the diversity” banners at Skopje Pride 2021. Photo by Goshe Nikolov/Meta.mk, used with permission.

“It is absurd in the 21st century to deny the rights to a normal and dignified life to a citizen,” stated Maja Morachanin, MP, the coordinator of the Inter-partisan Parliamentary Group for Promoting the Rights of the LGBTI People.

“This is why the message we are sending during the Skopje Pride is to stop the discrimination of the LGBTI people, the hate speech, the hate violence, stigmatization,” said Morachanin. 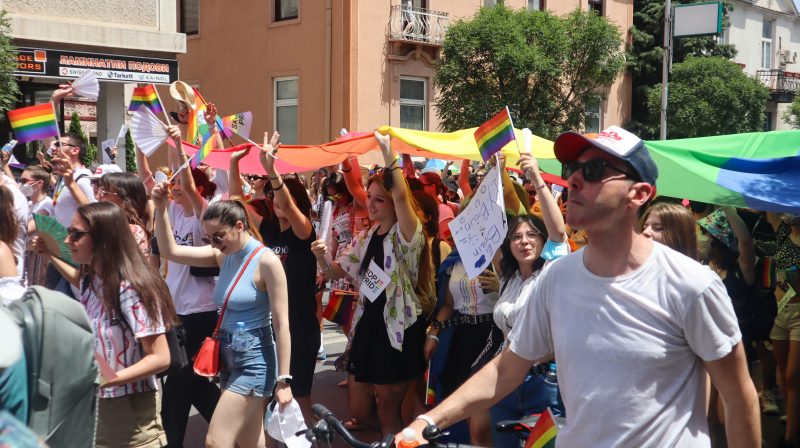 At Shkolka Stage in the City Park, Marija Kostadinovska, the parent of an LGBTQI+ daughter, introduced herself as “Ana’s mother,” and addressed the attendees and stated that, for children to come out of the closet, their parents must also help. She appealed: 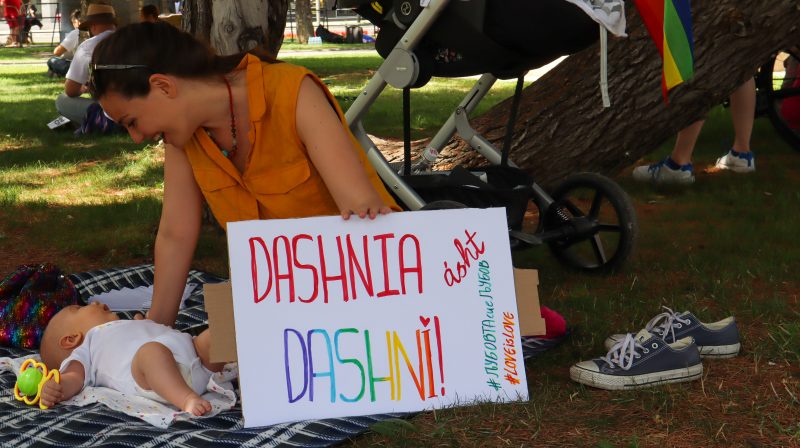 A family with a “Love is Love” placard written in Albanian, Macedonian and English attending Skopje Pride in City Park on June 26, 2021. Photo by Goshe Nikolov/Meta.mk, used with permission.

The Skopje Pride Parade, which took place in Skopje for the first time in 2019, was organized by the National Network Against Homophobia and Transphobia.