The incident triggered widespread debate in the Balkans.

Austrian football player Marko Arnautović caused a scandal on June 13, when he decided to “celebrate” scoring a goal against North Macedonia during a UEFA Euro 2020 championship match in Bucharest, by shouting vulgar anti-Albanian insults in Serbian at a member of the opposing team.

People from the Western Balkans generally understand such insults, as most of the inhabitants of successor countries of Yugoslavia, regardless of ethnic origin, have at least a basic understanding of Serbian or Croatian. Arnautović also made a gesture associated with “white power” groups in the US, which can also be interpreted as lewd in the Balkans.

The target of the verbal attack, Ezgjan Alioski, is an ethnic Albanian who plays for the UK Premier League club Leeds United. He didn't respond to the provocations.

This wasn't Alioski's first encounter with anti-Albanian discrimination. In June 2019 his family was denied service in a restaurant in his native town of Prilep for speaking Albanian. The restaurant staff later tried to apologize after they realized they had insulted a member of the national football team.

Ethnic Albanians comprise around a quarter of the population of North Macedonia and are the second most numerous ethnic group, after ethnic Macedonians.

Arnautović's rant was interrupted by the Austrian national team captain David Alaba, who had to physically grab him to make him stop taunting the opposing players.

maximum respect to David Alaba. For context, this is Austria's captain physically intervening on his own striker, Marco Arnautovic, who was celebrating scoring the winner with a racist rant against the Macedonian players. Goodbye Arnautovic. Kick racism out of football pic.twitter.com/RGrPdBpkm1

The incident triggered widespread debate in the Balkans. Many pointed out that ironically, Marko Arnautović's  surname, indicates that he might be of Albanian descent, since the term Arnaut in Ottoman Turkish literally means “Albanian.”

His surname is Arnautovic, “arnaut” in Turkish is an ethnonym for Albanians. So his surname is “the son of an Albanian” lol still racist

Arnautović's father is ethnically Serbian, and his mother is Austrian. He was born in Floridsdorf, a district in the northern part of Vienna.

Others pointed to the hypocrisy of some viewers’ reactions. Ethnic Albanian columnist from North Macedonia, Erol Shaqiri pointed that many of the supposedly outraged individuals are known to regularly use hate speech and derogatory terms when referring to other ethnic groups.

The Football Federation of North Macedonia (FFM) condemned Marko Arnautović's use of hate speech and informed the public via a Facebook post that it submitted an official complaint to UEFA requesting Arnautović be punished.

As the “House of Football,” we are always against nationalism, discrimination, and all other forms of insults and attacks that are not in the spirit of the game and the values we all strive for. We shall always stand and defend the interests and the dignity of the Macedonian national football team players wherever they might be playing. 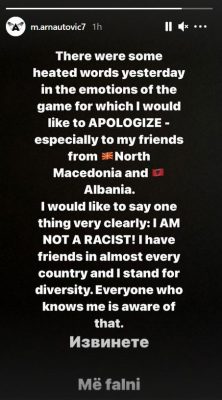 Arnautović apologized for the incident on his Instagram profile, claiming it was not rooted in racism, and adding the terms of apology in both Macedonian and Albanian at the end of the post.

There were some heated words yesterday in the emotions of the game for which I would like to APOLOGIZE – especially to my friends from North Macedonia and Albania.

I would like to say this one thing very clearly: I AM NOT A RACIST! I have friends in almost every country an I stand for diversity. Everyone who knows me is aware of that.

However, since then and up to the time of publishing of this article, Arnautović's Instagram account has not been accessible to the public, and the information on the site notes that it has been made “private” with the posts available only to approved followers.

After the Football Association of Macedonia filed an official complaint, on June 16, the UEFA announced their decision to sanction Arnautović for his rant against Alioski. The UEFA Appeals Body decided to suspend Arnautović for one game.

Some football fans criticized the levity of the sanction:

Oh come on, Arnautovic wasn't suspended because of an “over aggressive goal celebration.” It was because he spewed hideous, sectarian and racist abuse at Albanian supporters and Alioski. Don't sanitize it. #UKRAUT

Consequently, the Austrians had to play without Arnautović against the Netherlands on June 17 in Amsterdam. Twitter users pointed that rather than condemning his behavior, the Austrian national team used his image in their social media announcement for the match.

So the Austrian FA (@oefb1904) have chosen #Arnautovic as their lucky charm using his picture on their official starting 11 graphic, after he was give a one-match ban for using a racist slur directed at a player of Albanian descent who represents North Macedonia. https://t.co/gglEbcoEcc

The Netherlands won the match (2–0). Still, Austria managed to advance to the Knockout Phase, where it was eliminated by Italy (2–1) in London on June 26.

The anatomy of hate speech discourse

Some of the debate around the incident and the UEFA's ruling centers around cultural differences related to hate speech and defining racism.

Arnautović used a particularly grave insult of personal and collective honor to taunt Alioski, using swear words implying rape of his Albanian mother, paired with the use of a derogatory ethnic slur.

The slur term ‘Šiptar,’ which Arnautović used in his rant, is considered a contemptuous term maliciously derived through mispronunciation of the Albanian term of self-designation Shqiptar. In North Macedonia, the use of this word is generally considered a form of hate speech.

On the other hand, the Ottoman Turkish term Arnaut, or its modern version Arnavut, generally carries no negative connotation.

Incidents such as this are often denoted as chauvinistic nationalism in the Balkans and Eastern Europe, rather than racism. As such they are often relativized as less grave than racism based on people's skin color. Scottish columnist Colin Sweeny pointed that his might have been the case with the Arnautović scandal and might be the reason behind the relatively light sanction from the UEFA.