At least 25 people were detained as police prevented Pride marchers

As President Erdogan was delivering a speech at the groundbreaking ceremony for Turkey's controversial mega-development project Canal Istanbul, scores of Istanbul residents, were inhaling tear gas and being hit with rubber bullets while celebrating Pride on Saturday, June 26. According to some reports, 25 people were detained and several journalists reportedly faced police violence. One resident was detained after complaining to the police that a child was sleeping inside, as they threw sound bombs.

The weekend's incidents demonstrate the stark divisions within Istanbul. While the new Canal pitted scores of residents, opposition politicians, and experts opposing the plan against a government determined to pursue its project; the Pride march too was a division between a society embracing LGBTQI+ equality versus the police, ordered to prevent it at all costs per the government's orders.

A Saturday to remember

With the Canal Istanbul project, Turkey plans to create a massive man-made canal connecting the Black Sea and the Sea of Marmara. The groundbreaking kicked off the multi-part project, which will begin with the construction of the Sazlidere Bridge that will cross over the planned waterway.

Despite mounting criticisms against the construction of the Canal Istanbul due to potential environmental and political issues, on June 26, Erdogan, the President and Chairman of the ruling Justice and Development Party (AKP) said, “Today we are laying the foundations of one of the exemplary canals in the world.” The project will be completed by 2027 said the President and will “save the future of Istanbul to ensure the safety of life and property of Istanbul’s Bosporus and the citizens around it.”

The President's speech, however, was not just about the bright future awaiting Istanbul and its residents. He also derided the main opposition, the Republican People's Party (CHP), for opposing the project in the first place. “Yes, the CHP. They have blocked every step […] And those supporting them? They are all trying to think of ways to block things,” said Erdogan, while attributing the construction and development projects carried out in recent years as a result of AKP's leadership including the new airport and a third bridge connecting Istanbul's two continents. “I put aside their ineptitude in politics, and in producing projects, they say whatever comes to their mind, ignoring state morals […] These are rookies in the truest sense. They have no idea how to manage a government.”

CHP's Istanbul Mayor Ekrem Imamoglu described the ceremony as an “illusion” comparing the Sazlidere Bridge groundbreaking ceremony to a highway project unrelated to Canal Istanbul that's been slow to materialize due to Turkey's economic troubles. “The construction of a bridge here has nothing to do with the canal project. It’s something to do with the road hub,” he said at a news conference on Thursday.

On the other side of the city, Istanbul's Pride march this Saturday was very different to that in New York, Berlin, Paris, and elsewhere in Europe. Here, there was no room for rainbows or celebration. Instead, police rounded up the Pride march participants with unmatched force and disdain.

One man, standing in front of the police, begged the police to answer why he was not allowed to march in his own country. “Move, let us pass. Why can't I walk in my own country? Why? We are not doing anything to you! We are not harming anyone!” he said.

The American pop star Madonna noted the excessive police presence on Saturday on her Instagram stories: 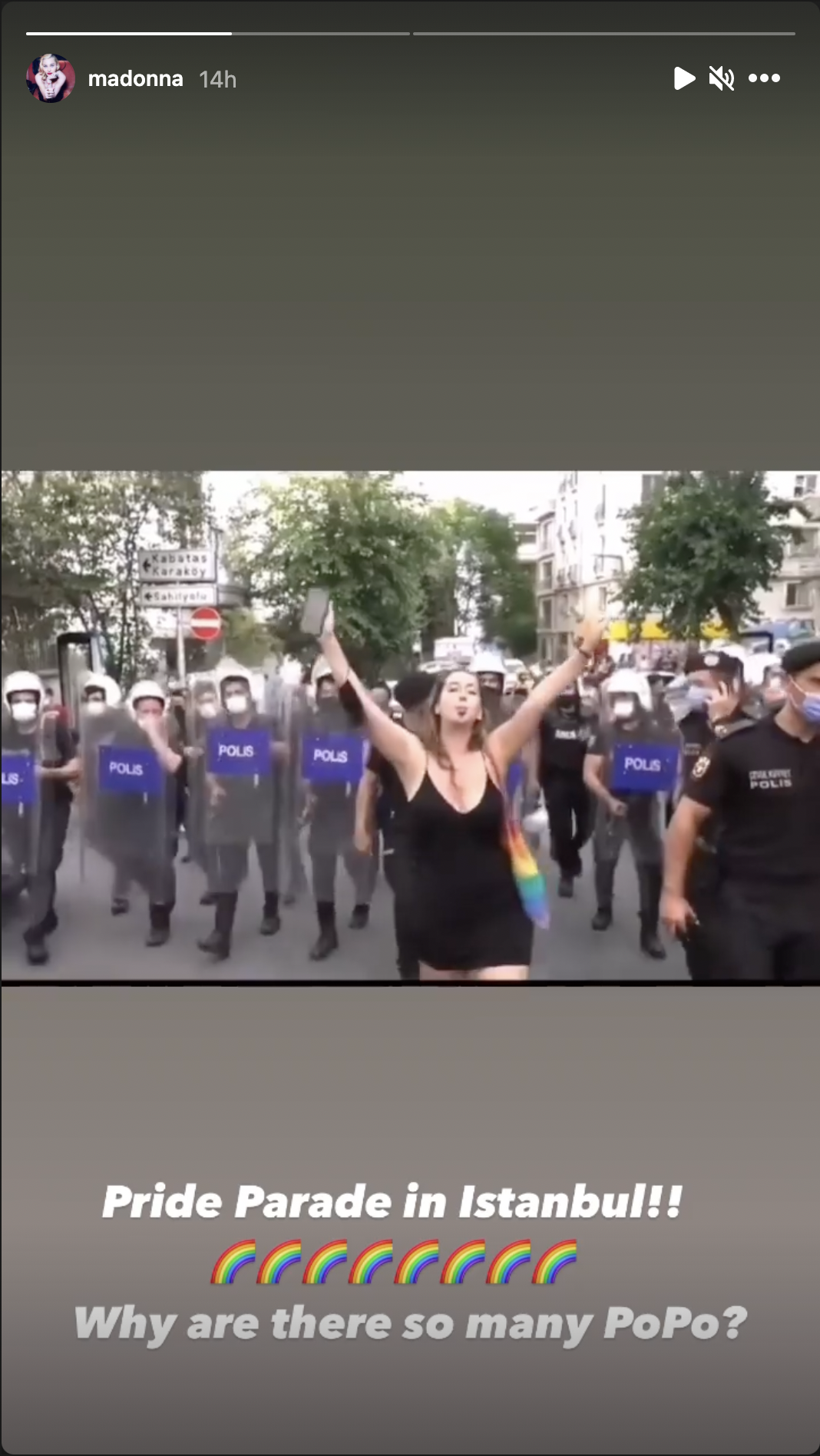 Among those who were battered by the police, was photojournalist Bulent Kilic who was forcefully pressed against the ground, with police pushing down on his neck. Kilic, desperate for air, was screaming, “I can't breathe!”

The Deputy Minister of the Interior, Mehmet Ersoy, dismissed the journalist's claims of violence:

It is not violence to detain those who resist the police during an unauthorized demonstration. The real violence is recklessly attacking our institutions, with lies, for the sake of provoking anti-government sentiments, and lack the merit to apologize later.

Kilic is determined to seek justice in his case.

Meanwhile, despite police violence, Istanbul did end up celebrating Pride:

Istanbul's 19th Pride march took place on June 26. Greetings to all Lubanyas [a slang word used for gay men] who despite all the police pressure, responded to tear gas with dance, painting the streets of Istanbul into the rainbow colors, and fighting for equality.