"Most of us are struggling and our families are suffering" 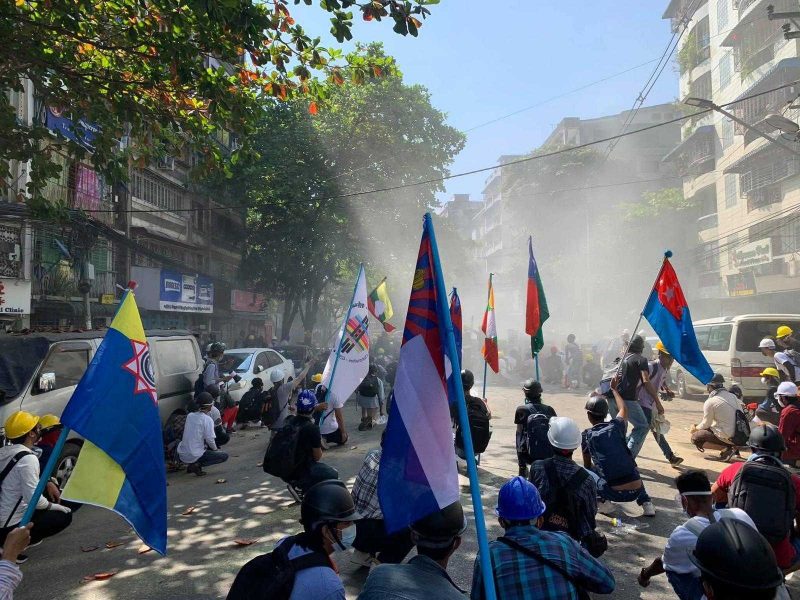 Media reporters and citizen journalists have been consistently covering anti-coup protests despite rising cases of attacks targeting them. Photo of a Yangon protest shared by a citizen journalist to Global Voices

Around 87 journalists have been arrested since the February coup in Myanmar as of June 17 . Most journalists have fled their homes, and some even managed to escape to neighboring countries. Meanwhile, banned independent media outlets were forced to go underground in order to continue their work.

Phil Thornton, a journalist and senior adviser to the International Federation of Journalists in Southeast Asia, talked to several Myanmar-based journalists about their experience during the early weeks of the coup:

They have started to remove their identification badges. Our PRESS logo is now a target. Not knowing where snipers are is a huge fear, we now need protection from bullets.

I’m not the only journalist, many of us are now in deep hiding. It’s dangerous on the ground now. We can’t use our name on our stories. It’s getting difficult to survive as we aren’t being paid. Most of us are struggling and our families are suffering…the pressure is massive.

Some journalists had to access the internet in hotels owned by associates of military officials. Thornton shared this quote from a journalist he interviewed:

Mobile data has been cut, it’s difficult to get ADSL connected, getting caught with a pocket Wi-Fi will get you arrested. I try to hook into established Wi-Fi at hotels owned by the military’s cronies.

Freelance journalist Thin Lei Win, who founded the news website Myanmar Now, acknowledged the role of citizen journalists in providing helpful information about the situation on the ground:

Career journalists are getting a lot of help from ordinary people. It’s amazing how these citizen journalists just with mobile phones have started documenting everything that’s been happening and passing it on to professional journalists. These citizen journalists are informing us — everybody outside the country and inside the country — of what’s happening. In fact, the trust between media outlets and the public is why news outlets like Myanmar NOW and others are able to do some of their reporting.

?? Over the week-end, two reporters were added on #Myanmar junta’s wanted list, and #Japan‘s freelancer Yuki Kitazumi was arrested. @RSF_inter denounces this blatant persecution of journalists, 19 of whom can be detained anytime!#WhatsHappeningInMyanmarhttps://t.co/KOFEAqVJOF

Han Kha-yar, a university student in Shan State, wrote about the inadequate protection offered to freelance journalists like her:

Many news organisations do not provide media identification cards to reporters, let alone have ready protection mechanisms for their journalists in dangerous situations.

This lack of safety-related support made me feel somewhat hopeless, and in despair, about my role as a journalist and my future as one.

Nevertheless, she is determined to pursue journalism in order to expose the ‘military’s wrongdoings’:

My own people, I thought, need someone like me, who is a local, to expose the military’s wrongdoings. For this reason, I have decided to drop my retirement plan. I am determined to carry on journalistic work – as long as I do not get arrested by the police or soldiers.

Foreign journalists were among those arrested by the junta. Japanese journalist Yuki Kitazumi was arrested on April 18 on suspicion of spreading ‘fake news’ and was detained for nearly four weeks before he was released and deported to Japan. After his arrival in Japan, he talked about the plight of tortured political prisoners. He also narrated his prison ordeal:

Even though I wasn't subjected to violence, an interrogator banged the desk hard when I refused to sign a statement containing things I had no recollection of saying. That frightened me.

Journalists forced to go into exile

When operations of security forces also targeted the media, many journalists sought protection in other countries. Aye Min That, who worked as a reporter for Reuters in Myanmar, fled to Thailand in March. She told the International Press Institute about the circumstances that led her to decide to leave Myanmar:

I decided to leave because of the increasing threats, particularly police forces coming to journalists’ homes to arrest them.

I have had a few scary experiences. One of which was that while I was not at home, someone was standing in front of my apartment. They were about five people who came to my apartment and banged on my door for a while. A friend was in my flat at the time, she didn’t open the door but heard them saying my name and address. After a while, they left, but at that point I said to myself, no matter who these people are, I should probably leave.

Not all those who went to Thailand were able to immediately continue their work. Several Democratic Voice of Burma (DVB) reporters were arrested by Thai authorities for ‘illegal entry’. After global media groups campaigned for their release, DVB said the arrested journalists are now “safe in a third country”.

Some journalists like Mratt Kyaw Thu were able to seek asylum in other countries. After arriving in Madrid, Thu told AFP about his experience while evading security forces in Myanmar:

We're all just waiting for the knock on the door. Sometimes you hear footsteps on the stairs, and it's like they're coming for you: you have this feeling all the time.

Even heavy rain can make people fearful because it sometimes sounds like gunfire.

He added that he felt guilt for leaving Myanmar but at the same time he also recognized the duty that journalists have to fulfill:

My friends and some doctors and teachers joined the people's defence forces to fight against the military while I'm here, and that kind of makes me feel guilty.

But on the other hand, if all the journalists are fighting against the military, who will write the news?

The intermittent blocking of the internet and the suspension of licenses of independent media outlets had deprived citizens of vital information about the pandemic and the coup. This inspired some concerned citizens to print news pamphlets and secretly distribute copies in public places. Two examples of these underground papers are The Voice of Spring and Molotov Bulletin.

The Voice Of Spring with
The Voice of Strike in Kalay.
Thanks to everyone who join us.
We must win this time !!! ✊✊✊#WhatsHappeningInMyanmar #June4Coup pic.twitter.com/MP4UDyEofx

The Southeast Asia Globe asked the person behind the Molotov about their intention in publishing the newsletter:

We noticed when the internet is shut off, the back-and-forth information disappears and people in their homes do not know what is happening on the streets, and that makes them fear more. To fight that back, we created Molotov.

The anti-junta bulletin Molotov was distributed in Shwepyithar, Yangon today (Apr 9). Cover features a hard hat-wearing Thagyamin, highest-ranking nat who is believed to visit the earth on 1st day of #Thingyan (new year festival) which starts next week. #WhatsHappenigInMyanmar pic.twitter.com/rhxav1mRT1

Despite the revocation of their media license, Mizzima continued their essential work in providing people with news. This short video documentary details how Mizzima journalists, editors and other staff have been working diligently despite threats of arrest and incarceration:

In the last part of the video, Mizzima staff make a pledge to continue working toward an independent media and express their hope that they might someday meet in their former office in Yangon City.

We will always stand together with Myanmar people.

We will never forget the sacrifice of Mizzima media staff who have been detained by the military junta.

We will always stand as an independent media.

We all will meet again in Yangon.