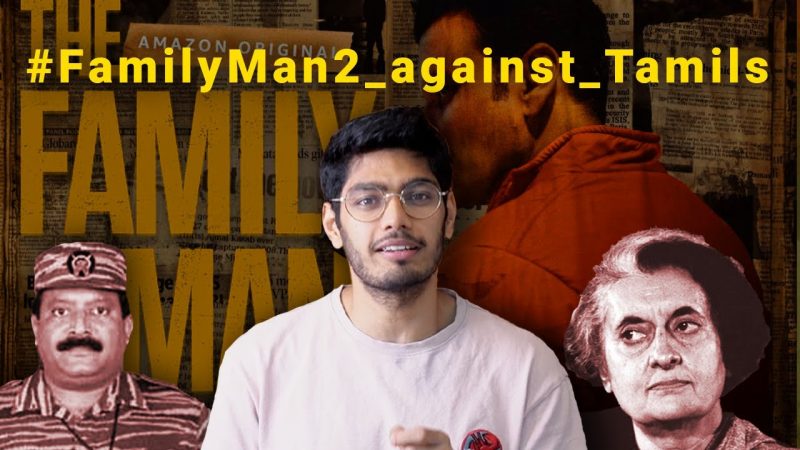 Screenshot from a YouTube Video by user “Soch by Mohak Mangal [1]” explaining why some Tamils are boycotting Family Man Season 2.

An Indian action thriller TV show, The Family Man [2], launched its second season on Amazon Prime in May 2021 and has landed deep in controversy for portraying the Eelam Tamils [3] (Lankan Tamils) in a highly colourist and problematic [1] manner. The ruling DMK government and other political outfits [4] demanded [5] a ban on the TV show.

In September 2019, OTT platform [6] Amazon Prime released The Family Man — an Indian espionage series capturing the journey of a beguiling middle-class man from Mumbai who moonlights as a secret agent while navigating a stormy personal life.

The first season of the series demonstrated layered storytelling as it traced deep-seated fears, simmering tensions, hidden desires, and freewheeling adventures alongside political commentary — all delivered with a dramatic punch. The narrative largely revolved around the geopolitical conflict in Kashmir [7], tying in violent extremist groups alongside absurdist humour — making the show a runaway summer hit whilst sparking conversation about hypernationalism and minority group stereotyping [8].

The season two trailer was released on May 19, 2021, and frames the native people of Tamil Eelam as terrorists who join hands with ISIS [9] and hatch destructive plans for personal gain. This drew immediate backlash from people within the Tamil community [10] across India and Sri Lanka on social media for the incendiary, tone-deaf rhetorical script. Which many say oversimplified politics between the two countries [11].

Nearly four weeks after the premiere, the series continues to draw strongly mixed reactions globally for labelling Eelam Tamils and their Tamil Nadu [12] supporters as terrorists, fundamentally discrediting the Eelam Tamil movement and normalising an anti-Tamil narrativ [13]e in the process.

Rajmohan Arumugam, a YouTuber with a significant Tamil digital media presence, critiqued the show [14] in a recent YouTube video:

Translated excerpts from the video: Why are the words “Tamil Eelam” met with disgust and contempt? Why do these filmmakers fail to speak of the Official Language Act, 1956 also known as the Sinhala Only Act [15] — which was imposed in Sri Lanka? Singapore’s Founding Father Lee Kuan Yew committed to keeping Tamil Language as an official Language as a dedication to the hardworking Tamils who built that nation. However, in Sri Lanka, a land where the Tamil people have historically been living together with the Sinhalese people — exclusionary policies were brought in to decimate — no one seems to bother recording any of these incidents in their celluloid fantasies.

Audiences also questioned the mental health, gendered and socio-political impacts of the television show. Rajesh Rajamani, a film critic focused on Tamil cinema, reflects in an analysis of the series on Twitter [16]:

While the lives of Eelam Tamil refugees in India is already a struggle because of how the Indian Government controls their movement & how it affects their livelihood measures, the series makes their lives worse by portraying them as potential ‘militants’ or ‘terrorists’ .

The makers have also been accused of blithely indulging in divisive characterisations and formulaic creative decisions which are deeply disrespectful [18] of those traversing inter-generational struggles for liberation, recovery and survival in contemporary times. For example, Samantha Akkineni, a fair-skinned South Indian actor plays the role of Raji (a female Eelam soldier) with brown-face makeup “to authentically portray the character [19]”. This disgracefully peddles racist undertones and anti-black narratives and is rooted in [20] racism [21].

alright here's the deal : i am watching The Family Man s02. However, they had literally to darken Samantha Akkineni's skin to fit the character. Like bro just hire someone with a darker skin, it is not that hard

Other reviews make important observations about how the series could add to the burden of already persecuted communities. Journalist @Bala_G tweets [24]:

The entire Family Man series is very problematic. Blatant Islamophobia. While they do try to make it ‘neutral’, it still is uncomfortable to watch. And that goes for the latest sequel as well. Samantha doing the ‘brown face’ was the least of the problems. And she's terrible tbh.

Between fact and fiction

For some fans, however, the criticisms seemed far-fetched and exaggerated [26]. Many were taken [27] with superficial markers of depiction associated with old-school Bollywood [28] style and satisfied [29] with middling efforts made. Others also seem to relish the various typified tropes they are tediously saddled with as noted in a review on The Pensive Mind, a blog by Sradhanjalli Patra [30]:

[..] creators have taken local actors speaking in their native language in the show. It provides a realistic take rather than casting people from other regions and dubbing their voices or continuing with the stereotypes that exist till now. [..] It shows the authenticity of the Tamil Community.

Whether this can be validated and centred by those who do not have the diverse lived experiences of Tamil war refugees and the Tamil people is a thought that continues to linger.

The struggles of the Tamil Eelam people: 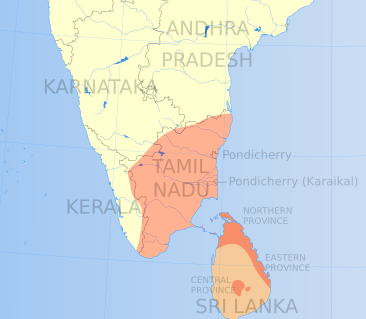 Areas in India and Sri Lanka where Tamil is spoken. Image via Wikipedia by Planemad. CC BY-SA 3.0 [32].

Sri Lanka is an ethnically diverse [33] country whose geography has been mired in post-colonial conflicts between the majority Sinhalese [34] and the indigenous Tamil minority. A newly decolonised Sri Lanka enforced discriminatory laws and policies [35] which formally made Buddhism the country's primary religion and Sinhalese the official language, disenfranchising native Tamils [36] and scaling back their livelihoods. This led to ethnic tensions as a number of fringe Tamil groups emerged in the mid-1970s, seeking a sovereign independent country. The resultant personal sufferings [37] framed the pathway and further entrenched the dream of an independent homeland (or Eelam [38]). These inflated linguistic, political, cultural and economic tensions between the two groups have led to a long-standing civil war [39].

The tussle for power [40] lasted almost three decades and ended in May 2009, in favour of the Sinhalese-dominated Sri Lankan government. The Eelam Tamil community is currently navigating post-war trauma [41].

Popular media in India [42] and overseas [43] are rife with problematic representations of Tamil people. Filmmakers have been accused of mindlessly dabbling in one-sided Eelam and Tamil characters and “presenting their lives as caricatured props to further their own narratives,” [44] according to film critic Rajesh Rajamani.

Demands for the show to be recalled [45] resonated worldwide among the Sri Lankan Tamil diaspora [46]. Tamil Rights Activists Chennai based Mohan Keech [47] and Cuddalore based Tamizh Seelan [48] opined on Twitter:

India portraying Tamil Tigers linked with ISIS to the world. #Familyman2 [49] Should be banned permanently. We don't appreciate it and request the distributors to not screen the film in the state.@Samanthaprabhu2 [50] – Shame on you Samantha. #Familyman2_Against_Tamils [51] pic.twitter.com/NS4uMV8zYc [52]

It was a freedom struggle which had happened in Srilanka between oppressive Srilankan government and Tamil Tigers. Stop slandering our freedom struggle@rajndk [54] #FamilyMan2_against_Tamils [55]

Despite this, the makers released an official statement [57] assuring that they have taken pains to ensure a “sensitive, balanced, and riveting story” and released the series as planned.