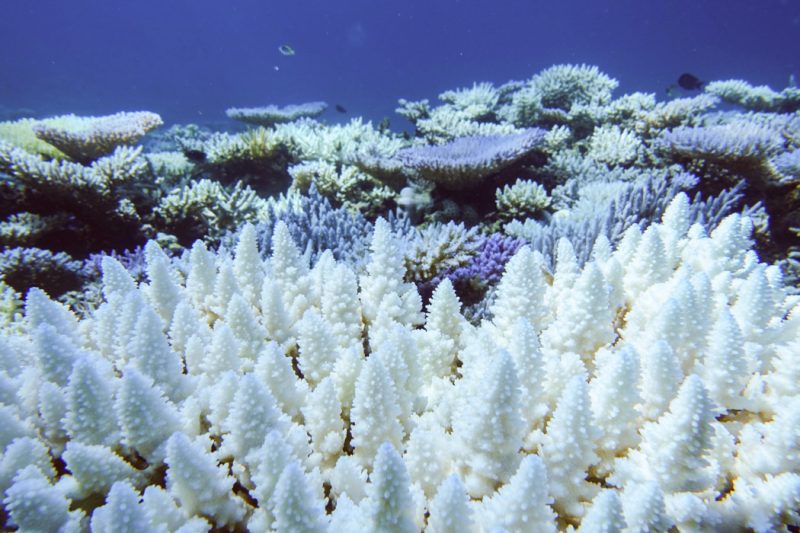 A World Heritage Centre [2] report [3] to UNESCO (United Nations Educational, Scientific and Cultural Organization) has recommended that steps be taken to protect the future of the Great Barrier Reef — the world's largest reef ecosystem which stretches off the coast of Australia.

The ‘State of conservation of properties’ report recommended that the reef be classified as an ‘in danger’ site and that the Australian government take ‘accelerated action’ on climate change to help preserve it, ‘in accordance with the Paris Agreement on Climate Change (2015)’. In addition to climate change, the report identified other key threats including coral bleaching, land-based run-off, coastal development and human interference.

The Australian Environment Minister Sussan Ley was ‘stunned’ [4] to learn about the recommendation, calling it arbitrary and political. During a call to UNESCO’s director-general, Audrey Azoulay, she stated that the group deviated from normal processes. Ley argued that there had been a lack of consultation and that Australia was being treated unfairly:

I agree that global climate change is the single biggest threat to the world’s reefs but it is wrong, in our view, to single out the best managed reef in the world for an ‘in danger’ listing.

The Environment minister defended her government’s management of the reef, calling it the ‘gold standard [5].’

She has also stated that her government was ‘blindsided’ [6] by a ‘backflip,’ claiming it had been assured that there wouldn’t be this kind of recommendation before the full committee meets in July.

There is no doubt, based on the scientific information, that the Great Barrier Reef is in danger and it is important that the international community is aware of that. There is no process or procedure that requires us to share the content [of reports].

She also rejected suggestions that the Chinese government had applied political pressure as part of its ongoing diplomatic dispute [8] with Australia.

There has been considerable speculation [9] in the mainstream media that China is responsible for alleged political interference with the report. Rupert Murdoch’s news media down under seemed to favor blaming the report on the Chinese:

Australia has been blindsided by a push by a China-chaired UN committee to declare the Great Barrier Reef “in danger” without proper consultation or scientific process. #auspol [10] https://t.co/wJvNcSWaHP [11]

The Government deliberately fuelled a conspiracy theory that China must have been involved in the UNESCO report. It is alleged that the Prime Minister’s Office backgrounded journalists along these lines for the first 24 hours of the release.

Bizarre that the govt is blaming China for possibly classifying the Great Barrier Reef as endangered and not the fact that the reef is actually, y’know, endangered

Many Australians were gobsmacked by Sussan Ley’s reaction and some turned to social media to voice their criticism:

I’m surprised the government is surprised about the listing of the Great Barrier Reef as ‘in danger’. UNESCO has been warning this for years & years . You can manage it as well as you like but climate change is killing it and we’re doing nothing about that in Australia .

Shorter Sussan Ley: we agree climate change is destroying the Great Barrier Reef but we won't do anything about it.#auspol [10]

The Australian government seems more upset that the UN recommended that the Great Barrier Reef be classified as “in danger” than they are that it's actually in danger.

Sussan Ley and Terri Butler on the Great Barrier Reef being ‘in danger’ https://t.co/mW1D7Zbrmm [17]

The Guardian has created a timeline [19] detailing the ‘decades of damage’ that the reef has endured. The most recent incident in 2020 was the third mass bleaching [20]event in five years.

Guardian cartoonist, First Dog on the Moon, poked fun [21] at the Australian government and their reluctance to fully acknowledge the growing threat to the reef.

Good Dog. Who does Unesco think they are? Listing the Great Barrier Reef as ‘in danger’! After all we have done for it! | First Dog on the Moon https://t.co/3slbAY5NhZ [22]

He continues, mocking the Australian government's response and apparent sensitivity:

Everybody is upset about the reef and “climate change” but nobody cares that the government’s feeling have been hurt. I mean who is the real victim here?!

The controversy has added fuel to divisions within the government over climate policy. Prime Minister Scott Morrison has yet to commit Australia to zero net carbon emissions by 2050 despite international pressure [24]. On the same day, the report was released, his junior coalition partner, the National Party, elected a new leader, Barnaby Joyce, who takes over the role of Deputy Prime Minister. Joyce is a strong opponent [25] of setting the 2050 target.

Australia is one of the 21 State members of the World Heritage Committee and will undoubtedly challenge the ‘in danger’ classification at the July UNESCO meeting. [26]