Where are the voices of Central Asian and Russian Uyghurs?

Uyghur activists' efforts in the region are muted 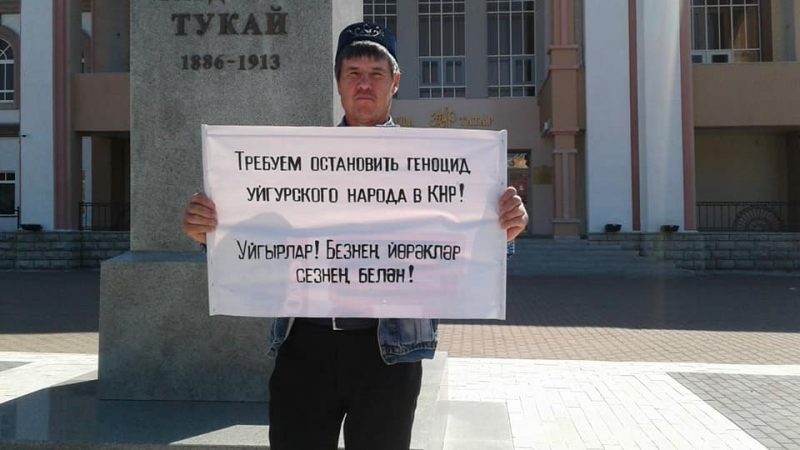 Tatar activist, member of the Union of Tatar Youth ‘Azatlyq’ holding a poster reading ‘We demand to stop the genocide of the Uyghur people in the People's Republic of China’ in Russian, and calling for support of Chinese Uyghurs in Tatar, June 21, 2021. Image from Facebook, used with permission.

Despite large Uyghur populations in Central Asia and Russia, these communities remain relatively passive in condemning human rights violations against Uyghurs in China, compared to their counterparts in Western countries. Are they actually “passive,” as some commentators suggest, or simply less visible? Is it a cultural-social issue, as human rights activism in Russia and Central Asia is still in transition, unlike in Western democracies? Is it a political issue, where outspoken activism is being silenced by states to please a lucrative economic partner? Or is it because of a lack of awareness of the issue, given its scant coverage in local languages?

Like many other ethnic minorities in China, Uyghurs, a Turkic Muslim ethnic community of 12 million people, have since the early 1990s been steadily losing their legal and political status and culture. Since the start of 2021, the world has witnessed documented cases of unprecedented human rights violations and dehumanization of this minority. Despite condemnation from academics and human rights defenders and sanctions applied to China by Western states, including the European Union, United Kingdom, Canada, and the U.S., the situation has not improved but is, in fact, deteriorating.

China has responded with reciprocal sanctions, and not many countries can afford to confront such an economic giant. For instance, some Muslim Arab countries, which could have been expected to support Uyghurs as their Muslim “brothers” are, on the contrary, among those who have supported the Chinese state on Xinjiang-related issues and have even deported Uyghurs.

The other “brothers” from whom support for Uyghurs could be expected are fellow Turkic states such as Turkey, Azerbaijan, and countries in Central Asia.

Outside of China, the highest concentration of Uyghurs is in Greater Central Asia, where, according to official statistics, their population is about half a million: there are reportedly 300,000 Uyghurs in Kazakhstan, 50,000 in Kyrgyzstan, 20,000 in Uzbekistan, and around 10,000 in Turkey. In Western countries, the Uyghur communities are much smaller: for example, in Germany, there are fewer than 1,000 Uyghurs, and about 15,000 live in the United States.

The smaller populations of Uyghurs in Western countries are more active, however. Non-governmental organizations such as the World Uyghur Congress, in Germany and the Uyghur Tribunal in the U.K. are prominent in the international arena.

Sofiya, a representative of the World Uyghur Congress, told me:

Mostly, we receive support from our own community, Uyghurs around the world. Turkish community has been also showing us a great amount of [moral] support for a long period of time.

Since information from official sources fails to provide the full picture, I posted questions on social media pages, in different Turkic-related groups and communities, regarding Turkic support for Uyghurs.

Uyghur NGOs in Kazakhstan, Kyrgyzstan and Russia also recognize the support of the Turkish people. However, a Turkish commenter on a Facebook page noted that although Turkey provides greater moral support to Uyghurs than other countries, it is less than what it provides to the Palestinian state, referring to the house arrest of a Uyghur human rights activist during the visit of Chinese officials, which was justified by Turkish officials as an anti-COVID-19 measure.

Kazakhstan’s Uyghur diaspora is by far the largest, with more than 100,000 Uyghurs in the city of Almaty alone. Several cultural organizations operate in Kazakhstan, including an informal association behind the Facebook group “Uyghurs of the World.” It is also involved in socio-political activity and organizes educational meetings to study the history and realities of Chinese Uyghurs. One of the Kazakhstan-based activists, interviewed by me, describes their activity on the ground:

The Uyghurs here in Kazakhstan are trying to bypass the “Uyghur issue.” … Conferences or gatherings are not prohibited in Kazakhstan, but there are no official rallies or pickets; they are not supported at the official level. On the contrary, when something of this kind is planned, there is always communication with the state security. Therefore, it happens so that a picket is planned, but the Uyghurs are not there. <….>Uyghurs in Central Asia rely more on Uyghurs in Europe or the United States … where the Uyghur issue is openly discussed.

In Russia and Central Asian states, though, the discussions are not as open, and authorities sometimes even support China's policy, akin to their Arab counterparts.

In their responses to my post on social media, some users referred to a lack of information in official mass media, while others, such as a user in the group We are Turkic/BİZ TÜRKLER, were supportive of integration:

They, Uyghurs, shall integrate to the vertical and horizontal structures of their state – China, and stop being a source of Islamic extremism there. If not, then they should either leave their homeland, or be violently assimilated. Integration is better than assimilation…<…>

In the group Turkic beauty/Tilde, Fikirde, İşte Birlik!, one post called for a discussion among participants of different ethnic backgrounds. Several stressed the inactivity of Uyghurs themselves in the Central Asia region:

In Almaty Kazakhs are three months in a row picketing the General Consulate of PRC against tortures and camps in East Turkistan, however not even a single Uyghur has joined.

Uyghurs in Central Asia are very passive, for what concerns the Uyghurs historical homeland. They, it could be said, are indifferent to the problems of the genocide in XUAR.

Uyghur activists in Kazakhstan and Kyrgyzstan responded similarly, mentioning the strategic partnership of these countries with China, Chinese lobbying, and the Uyghur position as a national minority or even a diaspora in the region.

In an interview I conducted with Farkhat Ibragimov, of the World Uyghur Congress in Kyrgyzstan, explained some of the difficulties in these countries:

There are, of course, also differences: when rallies or pickets are organized by ethnic Kazakhs in Kazakhstan or Kyrgyz in Kyrgyzstan, and when they are organized by national minorities, especially in support of the Chinese Uyghurs. A summons for interrogation, a fine, and even detention can arrive here. In addition, many of Uyghurs themselves are afraid both for their own lives and families and for their relatives in China.<…>

Ibragimov adds that most Uyghurs lost connection with their relatives in Xinjiang in 2016 when it was dangerous to even make a call there.

Rafkat Sadykov, of the Russian interregional association the National Cultural Association of Uyghurs in Moscow and Saint Petersburg, confirmed this view and mentioned the relatively small number of Uyghurs in Russia: 4,000 in the whole country, about 400 in the Moscow region and only 182 in all of Moscow city.

Sadykov said that in Russia, Uyghurs and their supporters are free to organize cultural and educational events, and can even organize and participate in single-person pickets in front of the Chinese embassy; however, larger events are not welcome.

…there is no oppression based on nationality in Russia. We live freely and organize events. There is rather a tacit ban on a political stance towards China. Russia does not welcome support for China's declared “separatism.” For Russia, China is a strategic partner. We understand [the] Russian position in relation to China. After all, a conflict with such an international partner can hurt the country's economy, and it will affect everyone …

When asked about the relative inactivity of Uyghur communities in the region, Sadykov said:

[The] Uyghur’ issue for us is not the past or something distant. We are all worried not only for our relatives, but also for our compatriots; this is a sore point for us. And we are not silent, albeit through culture, or single pickets, we try to convey information to people, we talk about it wherever possible. True, our voices are not as audible as the voices of the Uyghurs in Germany, for example.

Reflecting on the limitations of organizing social and political events on Uyghur issues, the Kazakhstani activist points to the bigger picture:

The human rights activism is not important just for Uyghurs, but rather for others, in order to learn and avoid such a destiny.

Considering the above, the inaudibility of Central Asian and Russian voices does not always mean silence or passivity, but rather a lack of wider coverage and, in turn, the lack of awareness.