An Emirati human rights defender's life has ended abruptly, but her legacy remains 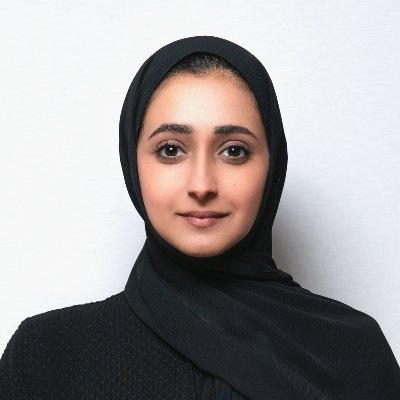 This post was written by Khalid Ibrahim, executive director of the Gulf Center for Human Rights (GCHR), an independent, nonprofit organisation that promotes freedom of expression, association, and peaceful assembly in the MENA region.

Emirati human rights defender Alaa Al-Siddiq, 33, executive director of London-based ALQST for Human Rights and Senior Researcher at Wejha Center for Studies, died in a car crash on June 19, sending a wave of shock and grief among many across the Arab world, as well as calls for the United Kingdom to probe her sudden death. In memory of her massive contributions, we revisited chapters of her virtual diary to illustrate her inspiring bravery and unwavering belief in the ethics of humanity and the value of freedom.

On 10 June 2010, at only 22 years of age, Alaa created the hashtag #inaljnah (#in heaven) to express her main concerns, outlining in a series of moving tweets, how she imagined heaven, a place where her mother would not cry and where the civil and human rights of citizens would be respected. 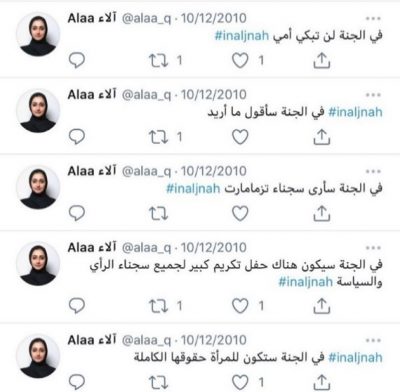 “In heaven my mother will not cry

In heaven I will say what I want

In heaven, women will have their full rights”

She tweeted further using the same hashtag to outline philosophical questions and wishes inspired by her deep respect for freedom of expression, freedom for her country, and prosperity and peace for the countries of the region.

On December 10, 2012, in a post entitled “Start with what is right and not with what is acceptable” on her WordPress site, Alaa quoted a line from “Azazeel,” a 2008 novel by the Egyptian writer Youssef Zeidan: “Why do I fear death? I should be more afraid of life, it is the most painful.”

With her father imprisoned in the United Arab Emirates (UAE), and her family settling in Qatar after having their Emirati nationalities revoked, Alaa found herself in exile in London, separated from all those she loved for over nine years. Her sister Asmaa’s husband, Omran Ali Al-Radwan Al-Harthy, is also a prisoner of conscience who remains behind bars despite having completed his seven-year prison sentence almost two years ago, on 16 July 2019.

In March 2021, the United Nations Working Group on Arbitrary Detention has been asked to intervene with the UAE authorities in order to ask for his immediate release and like most of the arrests made of prisoners of conscience in the United Arab Emirates (UAE), were followed by prison sentences handed down in mock courts on false charges.

On 30 April 2020, Alaa expressed her longing for her childhood homeland, UAE's city of Sharjah.

The last time I heard his voice was 2013

She echoed these thoughts in a BBC interview earlier this year, which she tweeted about on February 14, 2021, drawing over 2200 reactions.

I shared here a part of my story. The other face of the Emirati regime, the story of freedom of expression and its oppression, the story of Emirati prisoners of conscience which the world must hear about. My father, Mohammed Abdul Ruzzaq Al-Siddiq and his mates, Ahmed Mansour, Nasser BinGhaith, with reports from Human Rights Watch and Amnesty.

Her face drawn with pain and eyes filled with tears, Alaa began the interview with the words:  “My father, I haven't heard his voice since 2013.” 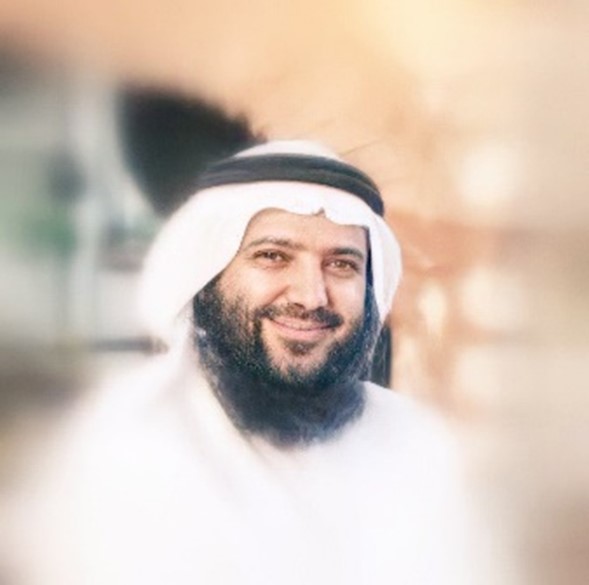 A year earlier, on February 14, 2020, Alaa tweeted a letter she had written to her father and which she wrote “will not—as usual— reach my father.”

She ended the heart-wrenching letter saying: “My father left the house seven years ago and has not yet returned. They named him a detainee and put him in prison, and I named him a falcon and settled him in my heart.”

Days before her eternal departure, Alaa posted another tweet with her father's picture and a few words:

I will not forget you

Mohammed, who was arrested in 2012 along with what became known as the “UAE94” group of prisoners, was sentenced in 2013 to 10 years in prison in a trial which was described as flawed, with him being tortured and facing threats of being killed. The court failed to take action for his torture.

Alaa began by defending her own father and ended up defending everyone's rights.

On June 13, her last tweet was a verse of the Quran:

And that his “striving shall soon be seen

The tweet reflects how her humanity and commitment to human rights and those suffering injustice, all of which stem from her humility and her strong sense of responsibility.

On 19 June 2021, Alaa was killed tragically in a road accident in Oxfordshire, UK.

Those who knew her are deeply saddened at the loss of this unique human being, a courageous human rights defender, and an Emirati citizen fortified with a high degree of knowledge who spoke the words of truth and addressed the injustices that authorities in Abu Dhabi have imposed on law-abiding citizens in her country and neighbouring countries.

To many, Alaa presented a version of Islam that is accurate and is respectful of humans. She had declared her commitment to crucial issues in the Middle East and North Africa region, foremost among them the Palestinian cause, along with her readiness to help those in need across the globe.

In a region where human rights violations have been domestically normalised and ignored by the rest of the world, Alaa's kindness, bravery and nobility was much needed, and will be severely missed.