'The Thailand national anthem has been controversial for some time' 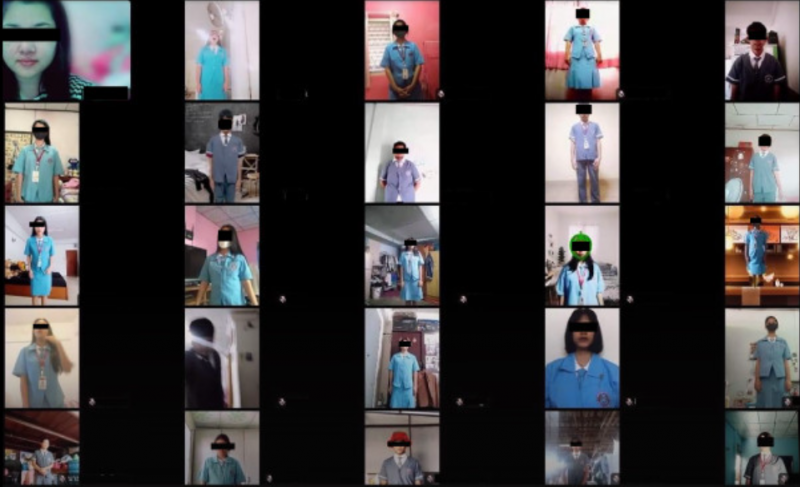 Thai students have turned to social media to criticize recent nationalistic efforts where teachers have required students to pay respect to the national flag, pray on camera, and wear uniforms during online classes.

According to student accounts, some teachers have asked their classes to stand and honor the national flag at 8:00 am each day before online classes begin. One teacher asked students to send photographic proof of them standing for the anthem for the record.

“Tomorrow, students should stand up to pay respect to the national flag at 8:00 am in front of the television at home and also take a picture and send it to me,” said a teacher from a school in Ubon Ratchathani via Line.

This conversation, with the name of the teacher deleted, was published on June 8 on the Bad Students Facebook page, a group of student activists advocating education reform in Thailand. The post went viral online with 13k reactions, 23k shares, and 3.5k comments as criticism poured in.

“Don’t stop them. It should be supported across the country from kindergarten to university. We must be patriotic. Do it many times until the foreign media report it. Show them what Thai education is like. Don’t curse them. Cheer them on,” said one sarcastic comment.

In a separate event, on June 8 Bad Students reported that a vocational college required its students to wear uniforms, pray, and chant college slogans in early morning Zoom sessions before online classes began. Bad Students said that the students were allowed to wear non-uniform clothes after the morning ceremony was over.

As criticism mounted, Amporn Pinasa, secretary-general of Thailand's Office of the Basic Education Commission, responded on June 8 that the Ministry of Education did not order this, but it should be looked at from different points of view. The new practice was okay and innovative as long as the teachers and students both agreed to participate.

However, Pinasa added that if the students did not agree with the policies, it could be interpreted as inappropriate.

The national anthem has been a point of political contention for some time in Thailand. In the 2020 pro-democracy protests, many students were seen showing the three-finger salute during the national anthem — a display that sometimes resulted in them being suspended or stripped of their student status or right to continue their education.

In October 2020, a 45-year-old woman selling roti slapped a girl in a student uniform for not standing up during the national anthem. The girl was having her period so she could not stand up. A pro-government group donated at least 18,200 baht (577 US dollars) to the assailant when she faced legal action from the student’s family.

Education has become a topic of controversy since the new semester began on June 1. Amid the spread of Covid-19, Thai schools, often seen as highly conservative and authoritarian, had to make many adjustments when most classes went online, with learning materials delivered to students’ homes.

In late May 2021, Trat Governor Pinyo Prakobphon called for students to wear uniforms during online classes, believing it would improve discipline and academic performance. He said schools will decide whether the policy should be enforced. In protest, Facebook users created camera filters to mock the policy. With the filters, a student appears to be wearing a uniform, without actually having to wear one.