Bears have given Hokkaido one of its most gruesome legends 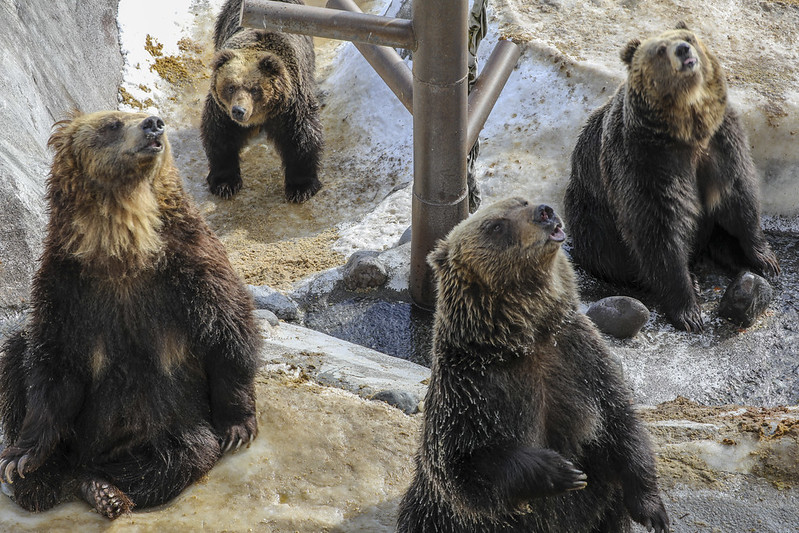 The Ussuri bear, also known as the Ezo brown bear, or black grizzly, at Noboribetsu Bear Park, in Hokkaido, Japan. The Ussuri brown bear is not in the same subspecies as the grizzly bear. These bears were not involved in the attacks on June 17, 2021. Photo by brian, from Flickr. Image license: CC BY-SA 2.0

On Friday, June 18, a brown bear ran through a neighborhood in the biggest city on the island of Hokkaido, invaded a military base, then an airport, and mauled four passers-by before being shot dead by local hunters. The incident illustrates the increasing interactions between bears and humans in Japan.

The bear, an Ussuri or Ezo brown, made national news as its flight through northern and eastern Sapporo, a city of 2 million located in central Hokkaido, the northernmost of Japan's four main islands, was captured live on television and on streaming video.

(When sharing video of the rampaging bear on YouTube or other platforms, some media outlets included a content warning, as some video footage shows the bear attacking passers-by.)

This is absolutely insane: a wild bear is on the loose in Sapporo, and there's actually footage of it forcing its way into a Japan Self-Defense Force's military base. https://t.co/NQiVegef2P pic.twitter.com/xadT854ToK

Among the four people mauled by the bear were a pedestrian, who suffered a broken rib, and a Japan Self-Defense Force (SDF) officer. Both attacks were captured on video.

After running through a suburban neighborhood and a military base, the bear roamed the runways of a small local airport before being shot dead by local hunters who had been called in for assistance. Earlier in the day, the bear had been spotted at a local department store.

The bear was just one of a number of odd incidents, including a streaker, a ninja, and a knife-wielding man, reported on the island of Hokkaido the same day.

Starting at 3AM – Reports of a bear in a housing development Higashi (East) Ward, Sapporo.

10AM – A completely naked (but masked) man observed in Kita (North) Ward.

Time unknown – A ninja is reported on the roof of a building.

An hour ago or so, dangerous driving reported in Tomakomai (a small city 70km south of Sapporo)

Japan is home to two species of bear, Asiatic black bears (Ursus thibetanus), and the Ussuri (brown) bear (Ursus arctos lasiotus), which lives exclusively on the island of Hokkaido, a sparsely populated and isolated island covered with forests and mountain ranges.

Ussuri bears have long been associated with H0kkaido and have given the island one of its most chilling and gruesome local legends, and one of Japan's oddest tourist attractions.

Ussuri bears are not yet considered an endangered species—it's estimated that there are 6,500 to 10,000 of them on Hokkaido. Male Ussuri bears can reach a height of 2.3m and a weight of 250kg. The bears are omnivorous and opportunistic; clashes between bears and humans often occur near trash receptacles and in areas where wilderness has been transformed into human settlements.

Bear attacks have reportedly been on the rise in Japan in recent years, due in part to a combination of climate change and regional and rural depopulation. As climate change creates ecological shifts, bears travel to new areas in search of food. It's also the case that as Japan's aging society causes a decline in population, particularly in rural regions such as Hokkaido, bears have become less accustomed to, and less afraid of and averse to humans and human settlement.

In fall 2020, bear sightings all over Japan had reached a five-year high, with speculation that the decrease in human activity outdoors due to the ongoing COVID-19 pandemic had left room for bears to expand their range. In 2019, bears attacked 157 people across Japan and 6,285 of the animals were captured, a 10-year high.

Some Hokkaido residents have learned to live with Ussuri bears. On the Shiretoko peninsula, a quasi-wilderness located on Hokkaido's northeast coast, local bears have become famous in Japan for introducing their cubs to local anglers.

In 2017, a Sapporo television station broadcast a two-part series about close interactions between humans and Ussuri bears in the Shiretoko region. The first part of the series is embedded below; the second part can viewed on YouTube (in Japanese).