'Draining minds and creators is war's most dangerous side' 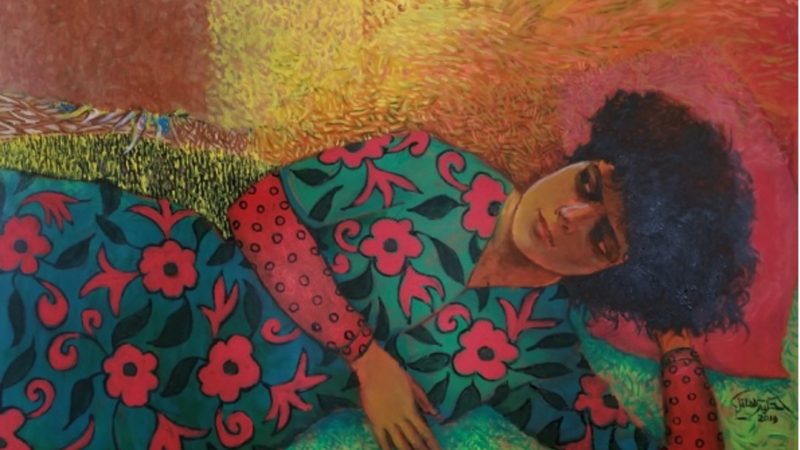 Acrylic on Canvas. Used with the artist's permission.

After six years of armed conflict, Yemen is the site of the world’s worst humanitarian crisis. The civil war and the Saudi-led military campaign, sponsored by the UK and the US, have displaced over 4 million people, and more than 20 million Yemenis are in desperate need of humanitarian assistance. Central governance has been  eroded almost to nothing, and the country is deeply fragmented.

Yet, artists in Yemen today can still see things in colour. Renowned artist Hakim Al-Akel, who lives in Sana’a with his family, paints from his childhood memory vibrant scenes of a Yemeni daily life that preceded the ongoing war.

Al-Akel, 56, is a founding member of Yemen’s first fine arts association, established in 1986. Today, he is considered one of the most significant figures on Yemen’s fine arts scene, having exhibited in over 80 countries. His paintings have sold around the world, including at Sotheby’s auction house. Alongside his successful career as an artist, he has held official positions, including that of advisor to the Yemeni Minister of Culture.

Al-Akel's paintings illustrate simple, everyday urban scenes, rural landscapes, and female subjects in vibrant colours. He often adopts a bird’s-eye-view to observe intimate and seemingly mundane scenes in public and private spaces. He doesn't give his works titles, and his subjects rarely look him in the eye.

Clara Guest spoke with Al-Akel by email about his childhood in Taiz, studies in Moscow and on painting war and peace.

Clara Guest: Tell me a bit about yourself. How was your childhood growing up in Taiz?

Hakim Al-Akel: I first became aware of the world in the green meadows, running, climbing trees and playing games with my friends. The games changed by season and when the fruits ripened, we infiltrated the orchards and stole them despite the dangers of being caught by the guards… As for school, I hated it to the extent that I was always met with some sort of punishment. Instead of paying attention and concentrating, I was obsessed with drawing in school notebooks. I enrolled to study with Hashem Ali and from that moment the real change that occurred in my life began. 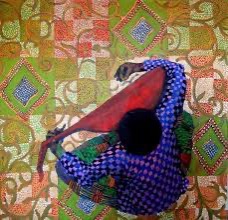 Untitled. Used with the artist's permission

CG: What was your experience being mentored by pioneering artist Hashem Ali?

HA: My acquaintance with Hashem Ali had a great impact that changed the course of my life. Under him, I read books of philosophy, myths and the history of art. I developed a clearer idea about art, and the constant conversation with Hashem gave me great confidence in defining my goals. Myself and the other students exhibited our paintings in exhibitions held annually by the teacher Hashem, so it changed the course of my life.

HA: Straight after high school, I entered the world of compulsory conscription in the army. This is a mythical world, another world of crushing humiliation and backwardness… It is necessary to turn into a real monster because those around you are a group of humans wearing masks of monsters.

CG: How long did you spend in the army?

HA: The army is a compulsory service after high school and every student is required to serve for a year and then go to university. It seemed to me that I was the worst soldier and I hated the military in general. During this period, I drew paintings and participated in exhibitions, and my relationship with Hashem continued until I completed military service with difficulty and went to study art in Moscow. 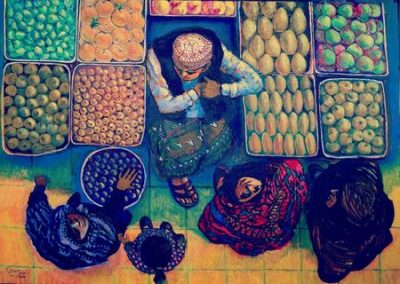 CG: You were one of a large group of Yemeni artists who studied fine arts in Moscow in the late 1970s. How did this experience influence you?

HA: In Moscow, I saw all my dreams come true before my eyes and between my hands, culture, arts, theatres, galleries, museums, all the pleasures of the world. The seven years I spent in Moscow passed quickly. During this time, I lived through all the changes, got married and our child was born in Moscow. Moscow is unforgettable. I still have dreams of studying, of my friends, and of all the places with which I have had a cultural, visual, spatial and temporal relationship in that wonderful, frightening city. I studied for seven years in Surikov Institute where I gained academic knowledge and a formal artistic training. I was lucky to study drawing and painting under Russian Professor Troshev so I was able to study colour for two years before moving to the mural department that exposed me to a wide horizon of knowledge, from the Renaissance to Islamic miniatures.

CG: Your artistic style today is very distinctive. Your paintings often show a birds-eye-view of Yemeni daily scenes and rituals in the public and private space.  How would you describe your artistic process?

HA: All my experiences depend on the reference of the place and the specificity of the Yemeni environment, including the uniqueness and privacy it bears…. In my experience, I rely a great deal on memories of scenes, and visions that have been etched in my mind from childhood until now. I try to employ the memories in my paintings and everything is fused together—time and place, reality and imagination.

HA: In 1996, we founded the Syndicate of Plastic Artists and we were self-appointed to manage the association. We published the first newspaper that specialised in the plastic arts, known in Arabic as Tashkeel. I was later appointed a consultant for plastic arts and art houses within the Ministry of Culture. But all this ended because of the war. There is no longer any government support and there are no salaries for employees. Everything is completely cut off. Talking about the past has become a forgotten thing. 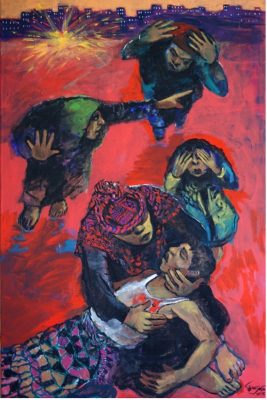 Untitled. Used with the artist's permission.

CG: In 2016, the second year of the recent conflict, you returned to Sana’a for your solo exhibition titled “The Ruins and Peace.” Can you tell me a bit about this collection?

HA: In 2015, the bombing began suddenly, and it created a strong and unexpected shock. Particularly as I lived next to the presidential house at the time which was bombed daily without stopping. Many of my neighbours moved to safer places. In a state of shock, I began to work on my sketches and plans for paintings that embodied this tragedy. This inspired the paintings in the exhibition “Ruins and Peace” which was inaugurated in January 2016. After this exhibition, I then exhibited in Bahrain in 2018 [Titled: A mantra for the Earth]. From that moment, I decided to focus on peace and coexistence as the primary goal for my art.

CG: Why do you choose to focus on peace?

HA: I have painted both war and peace but I choose to give peace more space. It is human nature to live in peace whereas wars are an exception in people’s lives. It is necessary to give war less time. War imposed itself as a sudden reality that we are living in.  And this surprise needs to go away in order to restore our lives and our stolen hopes. In the end everything will come to an end and art will remain.

CG: How do you see the current situation for artists in Yemen?

HA: Life has become a thing of the past and the most dangerous part in this ongoing war is the drain of minds and creators, so that its only warriors and images of martyrs that fill the streets. This is a painful and sad thing, especially since we lost a lot in everything, and the war is still going on and nothing will return as it was.