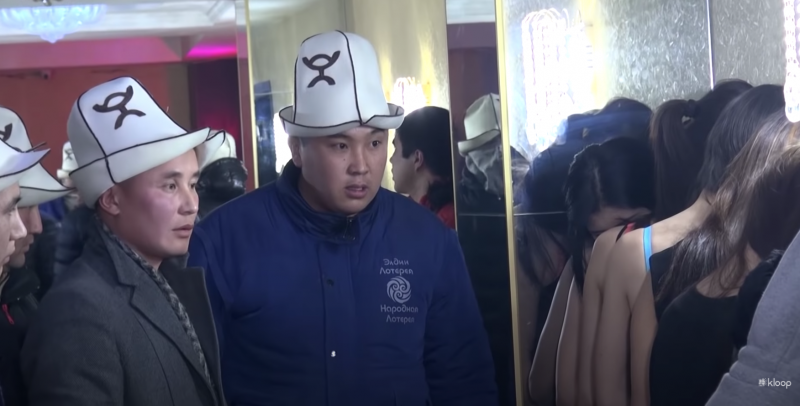 Growing Chinese economic influence has brought a flood of goods into Kyrgyzstan’s stores, Chinese traders into its markets, and businessmen into its shops, restaurants and clubs.

The everyday presence of Chinese in Kyrgyzstan’s cities is strongly opposed by an ultranationalist movement called Kyrgyz-Chorolor, also known as Kyrk Choro, which has vowed to defend and strengthen Kyrgyz identity, as they perceive it.

As the trading relationships fostered by the Belt & Road Initiative mature, China has become the largest exporter of textiles and other manufactured goods into Kyrgyzstan. At US$5 billion, imports from China represent more than 50 percent of Kyrgyzstan's inbound trade.

Today, almost half of foreign direct investment in Kyrgyzstan comes from China, with China's Exim Bank owning around 40 percent of the country's debt, according to OECD data [2].

The volume of Chinese goods and business has created a sense across many parts of Kyrgyzstani society that their country is being occupied by China. This feeling is complicated by Kyrgyzstan’s recent history, as ethnic Kyrgyz under the Soviet Union were a minority in what was then an autonomous republic.

Kyrgyzstan’s recent political landscape has included the collapse of numerous governments, and ethnic violence between Kyrgyz and Uzbeks, which have shaped political parties and allegiances.

The arrival of the Chinese brings potential for access to resources, competition for markets, and another element of instability into an already fraught environment. These conflicts also drive debates over Kyrgyzstan’s national identity, and to what degree it is intertwined with Kyrgyz ethnicity.

The Kyrgyz-Chorolor, or Forty Knights, takes its name from the traditional Kyrgyz epic of Manas [3], but their roughly 5,000 members include many middle-class professionals, such as physicians, professors, and lawyers. They also have acknowledged ties [4] with Kyrgyzstan’s Interior Ministry, even as government corruption is a target of their attacks.

Its activism draws on nationalist sentiment based primarily on discontent with what it deems as the government's betrayal of the ethnic Kyrgyz.

According to statements made by the Kyrgyz-Chorolor on social media [5], and in interviews with Global Voices, the group claims that the Kyrgyz government is “corrupt” and “pro-China” as it puts “business interests before people.”

More conservative members also allege that the Epic of the Manas, regarded as a repository of Kyrgyz customs, history, and code of ethics, casts the Chinese as a traditional enemy of the Kyrgyz tribes.

The Kyrk-Chorolor have pursued a dual strategy to push their vision of a pure Kyrgyz ethnic identity, combining online harassment and mobilization with real-world verbal and physical violence, raids on markets and nightclubs, and public demonstrations.

In 2018, he wrote [5]that his group demands a moratorium on issuing Kyrgyz passports to foreigners. Almost 1,000 people supported the group with comments such as “Chinese should be deported!”

In yet another post, he claimed [5] in December 2018 that “China is envious of the Kyrgyz land and lakes”. Kochorbayev was last year replaced as leader by 35-year-old Ruslan Adylov – a move that Kochorbayev himself supported in order to rejuvenate the organisation.

Kyrgyz-Chorolor have staged high-profile demonstrations, raids on clubs frequented by Chinese, and attacks on Chinese businesses. Their critics allege that they have enjoyed tacit support from the Kyrgyzstani state in many of these actions.

They often document these provocations, or allow journalists to film and broadcast their activities, as part of their publicity campaigns.

Kyrgyz-Chorolor's most active members often wear the traditional Kyrgyz white felt hat, as can be seen in this video by Kloop of the raid of the karaoke bar in 2014.

Their most visible stunts include an extra-judicial operation in 2013 to check work permits and visas of Chinese workers, following which the government deported 35 people [6].

The raid was conducted at a brick factory located in Kyrgyzstan's Chui district.

In 2014 they raided [7] a karaoke club popular with Chinese expatriates in the capital, Bishkek, physically and verbally attacking the Chinese present, demanding their documents and accusing the Kyrgyz women in the room of being sex workers.

In 2019, they raided a number of Chinese companies, including the Chinese-owned oil refinery [8] in Kara-Balta, about 60 kilometers outside of Bishkek.

Kyrgyz-Chorolor justifies these extralegal actions by claiming that the Kyrgyz government isn't doing its job.

“China knows Kyrgyzstan is a corrupt country. Their plan is to own our land by giving our corrupt officials huge loans,” Kuban Duisheev, a Kyrgyz-Chorolor member, told Global Voices.

Anti-China protests and actions are not reported by Chinese state media or Chinese diaspora media in Kyrgyzstan.

The Chinese embassy in Bishkek – the object of a terrorist attack in 2016 – says in its investment guide [10]:

The public security environment is not optimistic. Chinese enterprises and individuals are targeted by criminals regularly every year, in the most severe cases, up to 22 Chinese individuals were murdered or harmed in one year. In 2018 and 2019, (attacks) became more frequent, there were consecutive incidents of our companies being violently targeted by local lawbreakers/ criminals, which adversely affected the normal operation of the companies.

In recent years, Kyrgyzstan’s media have produced negative and extreme reports on China, as a result, Kyrgyzstan’s residents have become more resistant to the Chinese…Since 2018, the Kyrgyz media’s false reports on China have increased significantly, which has a certain impact on China-Kyrgyzstan economic and trade cooperation.

Another member of the Kyrgyz-Chorolor, who asked not to be identified, told Global Voices:

I see a lot of Pakistani, Indian and other immigrants living in Kyrgyzstan, but I do not fear these migrants, because they will go back home after a certain time. But Chinese [people] try to get Kyrgyz citizenship and remain in our country.

While the actions of the Kyrgyz-Chorolor affect the lives of the Chinese business community, they also call into question the model of society that some nationalists are trying to promote.

Not all ethnic Kyrgyz appreciate their actions.

As Oljobai Shakir, a poet and journalist, said in an interview [11] with Radio Free Europe, the Kyrgyz-Chorolor are “no different from skinheads…(their) actions bring discord or harm to our society.”

This story is part of a Civic Media Observatory [12] investigation into competing narratives about China’s Belt and Road Initiative, and explores how societies and communities hold differing perceptions of potential benefits and harms of Chinese-led development. To learn more about this project and its methods, click here [13].