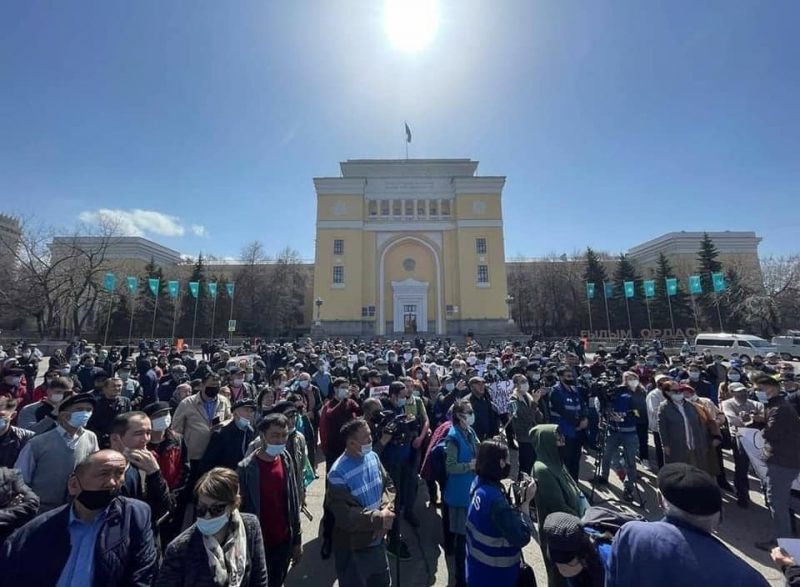 In the past few years, protesters in Kazakhstan have rallied numerous times against growing Chinese influence, despite severe restrictions on the right to demonstrate publicly. Yet a close analysis indicates that Sinophobia may be a tool instrumentalized by protest organizers to mobilize people against the government, while avoiding serious crackdowns.

Sinophobic attitudes have brewed in Kazakhstan for decades, often resting on conspiratorial rather than solid ground. The announcement in 2013 of China’s far-reaching infrastructure and investment project, the Belt and Road Initiative (BRI), was a catalyst of a new wave of anti-China sentiment.

Since then, Chinese businesses have flocked into Kazakhstan alongside government loans. Now, China is among the five largest creditors in Kazakhstan. In 2020, trade with China amounted to 15.4 billion U.S. dollars, a 4 percent increase compared to 2019.

For some Kazakhs, however, increased cooperation with their eastern neighbor poses more of a threat than new economic opportunities. A part of society is afraid that China will not only make Kazakhstan economically dependent but will soon begin to encroach on the country's territorial sovereignty.

Over the past five years, the phrase “Chinese expansion” has regularly appeared on the agenda of opposition rallies and demonstrations, been heard on the lips of civic and political activists, and has been thoroughly discussed in the media. For example, in 2020, Kazakhstan’s state media published an article highlighting how the country’s diplomatic corps pushed back on allegations made by their Chinese counterparts, who had argued that Kazakhstan could become a part of China.

Kazakhs regularly oppose the lease of agricultural land to China, the construction of Chinese factories in the country, the migration of Chinese workers, the growth in imports of Chinese goods, and an increase in external debt towards their eastern neighbor. The persecution of ethnic Kazakhs in Xinjiang also made a significant contribution to the strengthening of anti-Chinese sentiment.

‘Kazakh people are ready to fight’

The latest wave of anti-Chinese rallies took place on March 27 in several large cities: Almaty, Nur-Sultan, Shymkent, Aktobe, and Uralsk. The demonstrations were organized by Zhanbolat Mamay, the leader of the Democratic Party of Kazakhstan, and Mukhtar Ablyazov, a former banker and opposition figure living in France. The rally in Almaty gathered around 300 people and received permission from the government — a rare concession in Kazakhstan, where the authorities carefully control public expressions of discontent.

Protesters demanded the abolition of the “construction of 56 factories,” a project to transfer Chinese factories to Kazakhstan, and a ban on the lease and sale of land to foreigners.

“The large number of participants in the rally showed the authorities that the Kazakh people are ready to fight,” said Mamay in a live broadcast on Facebook. If Chinese influence continues to grow, Mamay believes that many more people will take to the streets.

“People are against Chinese expansion and for independence. People are ready to defend their nation, the independence and integrity of the country,” he concludes.

External debt and the magic number 55

Despite their strong sentiments and patriotic spirit, some of the trends and figures that protesters have voiced are a distortion of reality.

Take the external debt to China: It cannot be considered “critical” to the local economy. In 2020, China only ranked fifth among the largest creditors in Kazakhstan, while in 2013 it was third. In overall terms, Kazakhstan's debt towards China has in fact diminished by $6.4 billion to just above $10 billion.

Then there's the construction of 55 (not 56) Chinese factories. In September 2019, a few dozen activists in several cities protested against the transfer of 55 old Chinese factories to Kazakhstan.

Sparked in the oil town of Zhanaozen, in the west of the country, the protest was organized before the first official visit of Kazakhstan’s president, Kassym-Jomart Tokayev, to China.

That the protest began in Zhanaozen is symbolic. The oil and gas sector accounts for about 44 percent of Kazakhstan’s state budget. In 2011, the wind-swept town was the theater for a six-month-long oil workers’ strike. In December 2011, the authorities violently ended the strike, shooting at the protesters and leaving at least 16 oil workers dead.

Kazakhstan and China have been part of the Shanghai Cooperation Organization (SCO) for twenty years. In 2014, the SCO Heads of Government Council attempted to combine two initiatives: the BRI, led by China, and a new Kazakhstani economic policy called Nurly Zhol, which translates as “Bright Path.” As part of that effort, diplomats of the two countries agreed to transfer 55 factories from China to Kazakhstan.

However, as director of the China Center for Chinese Studies and political scientist Adil Kaukenov said in an interview with Forbes Kazakhstan, this plan has mostly not materialized:

At the time, the talks were about real business exchange projects, as a result of which 55 new production lines would appear on the territory of Kazakhstan, which, in turn, would have contributed to an increase in jobs, tax revenues, and so on. To date, of these 55 announced enterprises, only a handful have actually been implemented.

Despite the fact that the Nurly Zhol programme was concluded in 2019, without the completion of most of the factories, the issue is still used by activists to warn about Chinese influence.

One of the thorniest issues on the agenda of protesters has been a request to ban the leasing of Kazakhstan's arable land to foreigners. In February 2021, a month before the latest protests took place, President Tokayev instructed the government to prepare a bill that would do just that.

“Land is a foundation and a sacred symbol of Kazakhstan’s statehood. I have repeatedly said that Kazakh land cannot be sold to foreigners. Rumors about this need to stop,” Tokayev said, in February. In May, he signed into law the bill which explicitly bans any sale or lease of land to foreigners.

Five years prior, a wave of rallies against proposed amendments to the Land Code that would have eased the procedures to lease land to foreigners shook the country. The largest rally took place in Atyrau, in western Kazakhstan, on April 24, 2016, in which approximately 4,000 people gathered.

The proposed amendments were eventually scrapped. Meanwhile, the leaders of the protest, activists Maks Bokaev and Talgat Ayan, received prison sentences for “inciting social discord.” Bokaev was released in January 2021 after serving four years and nine months in prison. He denies that his activism played a role in Tokayev's proposed bill, but believes that it's an attempt to remove the incentives to protest. He told Global Voices:

This law appeared as a preventive move to reassure the citizens of Kazakhstan that the land issue is resolved once and for all. I will not exaggerate my role — my personal factor played a microscopic role. Apparently, Tokayev and the people around him believe that this issue is a political slippery slope.

The “Chinese issue” in fact, could prove to be a catalyst for further anti-government protests, according to Bokaev. He believes the real reason for the land protests in 2016 was not China, but economic problems, the lack of democratic institutions, and endemic corruption.

“People realized that they could have the earth taken from under their feet,” he says.

The economic and legal environment where foreign businesses now operate, in his opinion, creates conditions for predatory agriculture. In the case of leasing agricultural land to China or any other country, the businesses work for short-term, maximum profit without worrying about the consequences of their actions, such as chemical spills that can pollute the soil.

Overall, anti-Chinese sentiment retains the capacity to mobilize public opinion in Kazakhstan, as Temur Umarov, an analyst at the Carnegie Moscow Center writes:

Without these fears, there would be no violent reaction to fake news or rumours. And, as recent rallies have shown, Sinophobic sentiments can be used by various forces in the internal political struggle.