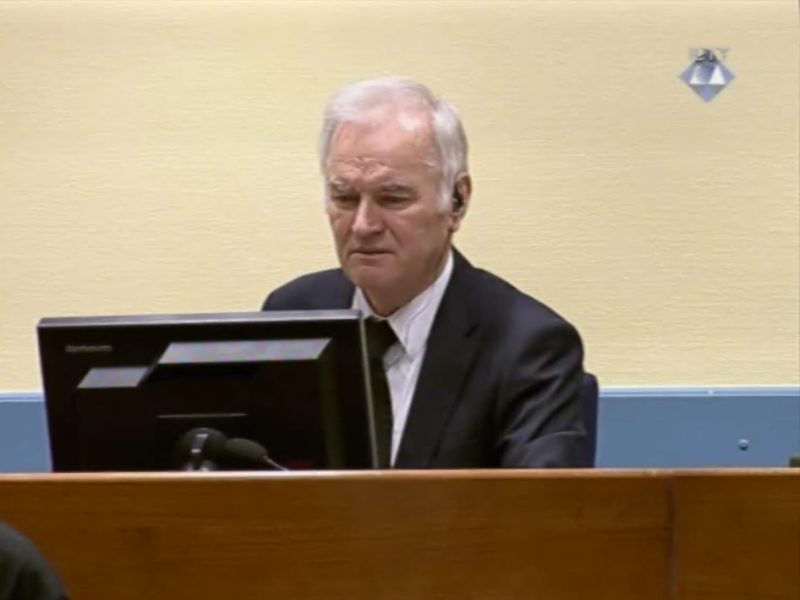 Ratko Mladić, former commander of the Bosnian Serb Army, on trial at ICTY in May 2014. Photo by the ICTY, CC BY 2.0.

Last week brought the final guilty verdict in the case against Ratko Mladić, the Commander of the General Staff of the Army of Republika Srpska (VRS) – the rebel Bosnian Serb army. Bosnians have hailed the decision, while pointing out that many of Mladic's victims have still not been found and given proper burials. In Serbia and  Republika Srpska, the conclusion of the case has seen another alarming spike in denialism, which populist administrations have done little to arrest.

Mladić was first indicted by the International Criminal Tribunal for the Former Yugoslavia – ICTY back in July 1995, less than two weeks after troops under his command had carried out the biggest act of mass slaughter on European soil since World War Two, following the fall of UN “safe area” Srebrenica.

He moved fairly freely and lived a normal life in Serbia, at least before the fall of Slobodan Milošević, and was a prominent presence on military bases, including Topčider on the outskirts of Belgrade.

On May 31, 2011, Mladić was finally extradited to the ICTY to stand trial for crimes committed in Bosnia and Herzegovina.

In November 2017 he was found guilty on 10 of the 11 initial charges, including genocide in Srebrenica, extermination of non-Serbs, murder, persecution and deportation of non-Serb civilians throughout Bosnia and Herzegovina, unlawful attacks on civilians and terror, for the VRS campaign of sniping and shelling of Sarajevo as well as hostage-taking, including UN personnel in Bosnia and Herzegovina.

The ICTY formally ceased to exist in December 2017, and its residual functions, including oversight of sentences and consideration of any appeal proceedings are under the jurisdiction of a successor body, the International Residual Mechanism for Criminal Tribunals (IRMCT).

On June 8 the IRMCT rejected Mladić's appeal against the convictions for genocide and crimes against humanity, meaning the 78-year-old will most likely spend the rest of his life in prison.

The decision to uphold Mladić's convictions by the International Tribunal for the Former Yugoslavia, as well as his sentence of life imprisonment, provides historical certainty and finality for victims and survivors…It also sends a hugely important message throughout the Western Balkans where we see genocide denial and the glorification of convicted criminals such as Mladić not only persisting but increasing.

In Bosnia and Herzegovina, activists and NGOs representing the survivors and relatives were mostly content with the decision. Tuzla-based activists from the organization Women of Srebrenica said that while they were happy with the verdict, nothing can bring back their husbands, sons, brothers and fathers.

“If he had any humanity him, he would not have slept peacefully, but should have admitted the genocide he committed and apologized,“ Vasvija Kadić stated in an interview with the Klix.ba outlet.

Survivors have also pointed to the fact that the areas around the killing fields are still an active crime scene and that the remains of over a thousand victims are still unaccounted for.

A large number of survivors and relatives live in hope of being able to bury the remains of their loved ones.

Many survivors had gathered at the memorial center at Potočari to watch the final verdict.

One of them told reporters that they expected the affirmation of guilt but that it had taken too long to bring Mladić to justice.

We expect this verdict, but we think that now it's too late. Mladić should have been convicted a long time ago, but we still expect and  hope that justice will be done.

The verdict also demonstrated once more that the culture of denial is deeply rooted in both Serbia and parts of Bosnia and Herzegovina that suffered most from Mladić´s onslaught – Republika Srpska.

In Trebinje, in eastern Bosnia and Herzegovina, a large poster with the image of Mladić and writing “Hero!” appeared after the verdict.

Another went up at an overpass in Banja Luka declaring: “We don't care about verdicts from the Hague you're the hero of the Serb Republic.”

Tricolor [Serbian] flag with the image of Mladić and the word “Hero!” placed on the Old Town fortress wall in Trebinje.

Pro-government tabloids in Serbia praised Mladić as a Serb hero and said that he was convicted “despite the fact that there was no evidence against him.” Others called him “brave and stubborn”, and characterised the trial as a huge injustice.

Official reactions in Belgrade were more subdued but far from encouraging. Prime Minister Ana Brnabić said that there is no doubt that the International Criminal Tribunal for the Former Yugoslavia was a “political court” with an anti-Serb bias.

A prominent minister in Serbian President Aleksandar Vučić´s government, Aleksandar Vulin, said the verdict was not about justice but “revenge.”

Many pointed out that Vučić himself was a staunch supporter of Ratko Mladić.

Indeed, Vučić once proclaimed the Serbian Assembly to be a safe house for Mladić and another Bosnian Serb war criminal Radovan Karadžić.

Remember, in 2007 Vucic praised Ratko Mladic. The facts didn't change, there was no secret about the crimes Mladic committed. Vucic supported him BECAUSE of the crimes he committed. What changed were the opportunities for Vucic.
. https://t.co/TZLXOBGegC pic.twitter.com/wJ3UAhLufY

[In the photo, then-MP Vučić is holding a sign “Safe house for Ratko Mladić” in Serbian parliament.]