China's wandering elephant herd show. Not as ‘lovable’ as it looks.

Authorities are paying farmers damages to keep the propaganda flowing 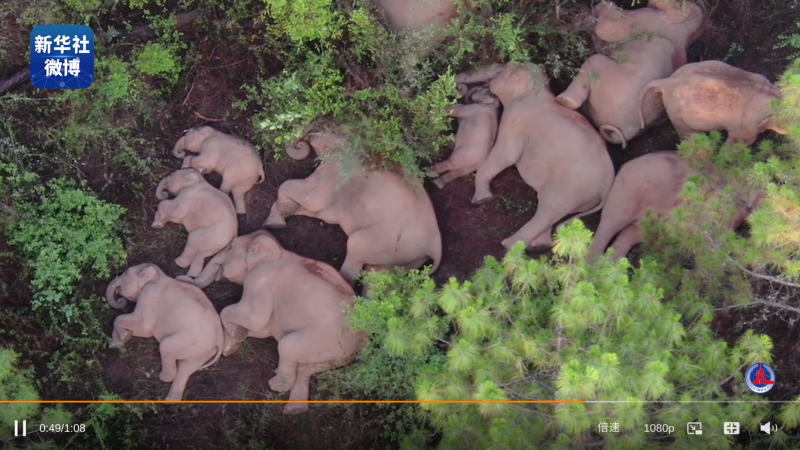 Fifteen Asian elephants have become China's latest internet celebrities and the most successful ambassadors of the new “lovable” image that the government is trying for. But as conservationists have explained, what looks like a beautiful story is actually a consequence of ever-expanding economic activity.

The elephant herd left its habitat in Xishuangbanna National Nature Reserve, which is located near the border of Myanmar and Laos in China’s Yunnan province, in mid-April.

Ever since they have been escorted by a dozen drones and police officers. From May, China Central Television (CCTV) has been live-streaming their daily activities.

No one knows where the elephants want to go.

The herd trumped north for more than 500 kilometers until it reached the outskirts of Kunming city on June 6. Then, lured by fruit provided by their escorts, they took a U-turn and began heading south. 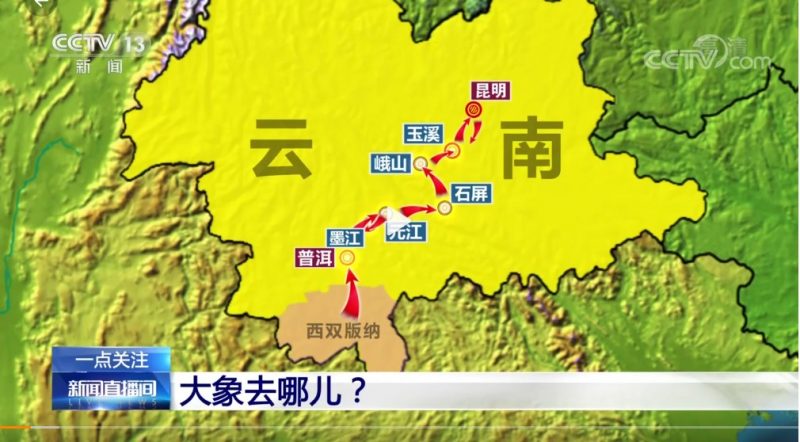 The elephant story is more than a spontaneous social media craze.

A viral post on Sina pointed out that the live-streaming of the wandering herd has been China’s most successful propaganda coup in recent years:

Chinese people’s kindness towards the animals will nullify theories about China’s threat […] What would happen if this had taken place in other countries? Let’s say in India. I have seen reports that villagers would use fire to drive the wild elephants away…China has not done this, Chinese people treat the elephants like their own children. […]

When foreigners look at the 15 elephants, they realise that their perception of China has been biased […] Such changes of perception cannot be achieved via 1,000 strong statements, nor 10,000 verbal confrontations.

The writer concluded that “even elephants know that China is a good country” and that such a story is a perfect answer to Chinese president Xi Jingping’s call for a “lovable” image for China.

On June 2, Xi signaled a shift in the Chinese Communist Party's diplomatic approach when he told senior CCP officials to present an image of a “credible, loveable and respectable China”.

No wonder then, that China’s foreign ministry spokesperson Hua Chunying was among those posting videos of the elephant mud bath on Twitter:

Playing mud & enjoying in the rain.
The 15 escaped wild elephants of #Yunnan is now on their way back. The continuing rain in recent days offered them the opportunity of mud bath. pic.twitter.com/GdigoVw4ED

Yet some Weibo users questioned whether the elephant story would be a happy one in the long run:

As the elephants left the mountain, people were not driving them away but giving them water and food. Villages were evacuated to give way to the herd. Such practice is incorrect. If the elephants get used to this, they will enter villages whenever they like and may cause damages or even fatalities. People should drive the elephants away and let them know it is dangerous for them to leave the mountains…

At present the elephant herd has ruined more than 842 mu or 560 square kilometers of farmland and RMB 6.8 million yuan economic damages. The Chinese government has promised to shoulder the villagers’ loss, according to a report on the state-affiliated Phoenix Television channel.

Back in 2017, scientists raised the problem of the displacement of natural forests due to the expansion of plantations in forestry regions including Xishuangbanna and Pu’er.

In addition to rubber plantations, the growth of the Pu’er tea industry since 2003 has led to the expansion of commercial forest plantations and an increase in human-elephant conflicts.

Professor Zhang Li, a field biologist who works on Asian elephants, explained that the wandering herd is trying to find a new natural habitat to settle down.

He told the state-owned People’s Daily that in the past two decades, the expansion of commercial forest plantations has reduced Asian elephants’ scattered habitats by 40 percent.

During the same period, the population of this protected species in China has grown from 193 to 300 individuals.

Why are the elephants running away from their home? Propaganda could not solve the problem and we have to respect science. While we have to note the achievements that we have made in conservation, and that the population of Asian elephants has grown, we can’t neglect the reality that rapid economic development has led to the disappearance and fragmentation of wildlife habits. Green water and mountains are as precious as gold. A healthy ecological system is fundamental to sustainable development…

Zhang stressed that in order to stop elephants wandering into human villages, it is necessary to establish a national park system that strengthens conservation efforts by expanding and connecting the natural forests where wild animals reside.

Many of the responses to Zhang's post focused on what will happen to animals once media interest has died down.

Finally an expert has provided an explanation about the herd’s northbound journey. Local officials avoided addressing the truth. They either said that the herd had lost their way or that the nature reserve is working so well that the elephants are overpopulated. All the official media outlets have taken an entertainment-first approach. I dare not look at the elephants. They have lost their home. After the public has lost interest watching the herd, what will their fate be? Now that someone has spoken the truth, the authorities probably want the elephants to vanish from the media spotlight.