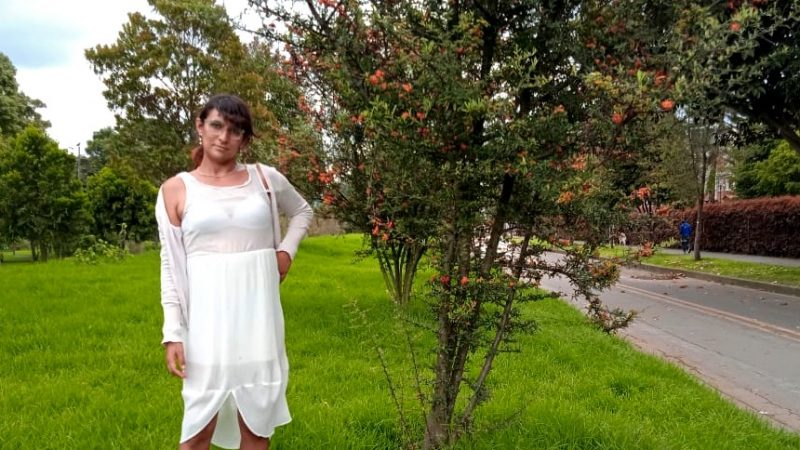 Photograph by the author, Lucía Jiménez Peñuela, used with permission

Once upon a time, a girl was born. But only when she became an adult could she start living.

Lucía, who was screaming at me all my life to see the light. Lucía, who made me see myself. And so I came to light in 2018, after more than a decade of teaching and becoming a proud mother.

There is nothing like looking in the mirror and recognizing yourself. Not seeing someone else, but your own self. Gazing at your reflection, and proclaiming, “This is me.” Discovering who you are, and repeating it to yourself because you know how soothing it is to live being yourself. I believe it is the definition of happiness: to live in peace with who you are, not with the person you were assigned to be. Happiness is being able, from dawn to dusk, to be yourself, Lucía.

But becoming the woman I am made me realize, for the very first time, the danger of stepping a foot outside of my home. Since then, not a day has gone by when I am not insulted, mocked by strangers, and faced with the tangible reality of the saying “to run for your life.” Being forced to move to a new neighborhood, because you can no longer live in the same places as you did before. Even your workplace becomes a violent environment.

In the parents’ and teachers’ eyes, I am a bad influence on their children. I am the “homosexual aberration,” the indoctrination of the “gender ideology,” a pervert that has to be dragged out. You hear your colleagues, the very teachers who used to be your friends, say they would rather their children became thieves or drug addicts than something like you. But you do not only hear it from them. It comes up frequently in the conversations of people you do not even know, the “good people,” who make you the subject of their reprobation when you happen to walk in front of them. 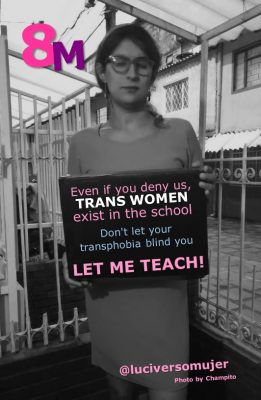 Photo taken and edited by the author

I always try to adapt, to survive, and if possible, to die of old age. My skin is getting stronger and stronger. It does not mean that I am no longer affected, only that I seek to turn the page, to move on to the next chapter, and if possible, to write my own life until the end.

It becomes very difficult when you live in a country where women are considered spoils of war. At any moment, you can be raped at a police security post or killed at an army checkpoint.

Not only are you addressed with a name and a gender that do not apply to you. Parents and teachers make comments about how they will withdraw their sons from the school because they fear your presence will turn them gay. The art teacher tells you that you look like a Scottish man in a skirt. The PE teacher, the same teacher who blamed you for turning his son gay, yells at you in front of the students, over and over again, and stops you in the hallway, pretending he is going to beat you, then calling you a “faggot” when you report it to the administration. But the administration's response is always the same: they cannot do anything.

When you present yourself as the woman you are, most people consider themselves entitled to have an opinion and make decisions about your life. Everyone has an opinion: your colleagues, the occasional relative who still speaks to you, or even a Christian pastor from Costa Rica who visits your profile to make fun of your photos. Your managers and colleagues with whom you are still on talking terms ask you to give them time and to ignore the verbal and physical aggressions that you brought on yourself for “being like that.” Because you are nothing more than a dress, a thing, a problem.

Now that the months have turned into years, I know that the problem is not merely ignorance that will fade with time. The abuses continue and even worsen. The root of the problem lies deeper, and it has to do with respect.

The lack of respect within patriarchal societies has internalized through its media the view that certain lives are not worth living, and what is even worse is that it has permeated our families.

It has been decided that men's lives are more valuable than women's lives. That if you like people of the same sex you have to move out of your neighborhood, and if you dare to go out wearing women's clothes, you have to beat it. A side note to my female friends: remember that, on this scale, I am worse than the worst. In other words, by the standards of the society I was born into, I should have died a long time ago.

We are people, we are humans, we are sentients. Just like you. We are women just like your mother or your daughter. We are mothers, daughters, single and married women, and as it should be for any woman, we are free to create our families, to live our lives according to what we think is right for us without harming others.

Stop hating and allow us to live past 25 years old, to have jobs that are not limited to prostitution or hairdressing, not because there is anything wrong with those professions, but because what is wrong is that we cannot choose.

We chose life. We are not women because of some birth documents issued by doctors, but we are women because we chose to be women, in spite of hatred and death.

Our construction as women is superior because it is conscious and not imposed because it does not rely on specific genitalia. Like other people, we were born with penises, vaginas, intermediate organs, in different stages of development, but we, in addition to being born women, have had to fight for it sometimes at the cost of our lives, which is something that the majority of people, who feel comfortable with the gender that was assigned to them at birth, will never have to face. Simply because we have different genitals under our skirts or our pants.

This girl, woman, mother and teacher who writes to you hopes to be able to continue growing in the midst of hatred and denial. For all these reasons, she dares to proclaim that there is nothing braver than being a trans woman and living, even if you die trying.