Many Belarusians are already living abroad or in exile 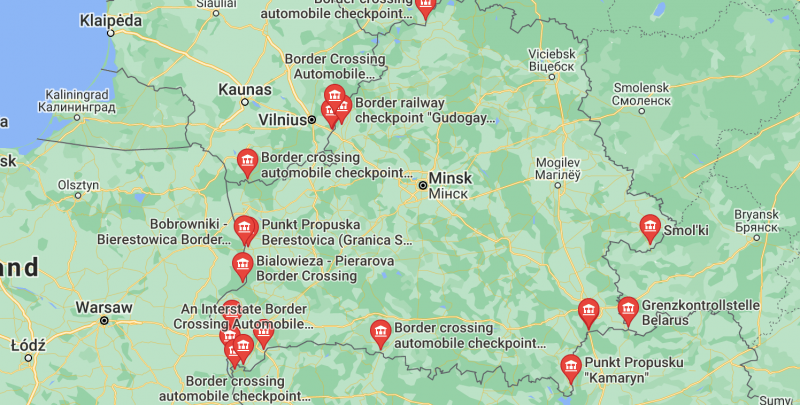 The Belarusian government of Aliaksandr Lukashenka has put in place temporary restrictions preventing most of the citizens from going abroad. The travel ban comes amid ongoing mass repressions in the country following protests against the outcome of a disputed August 2020 presidential election.

Under the new rules published at the end of May 2021, which according to the state border security agency are designed to halt the spread of the coronavirus, all land border crossings essentially have been blocked.

I signed up to Twitter to share poetry. Since then, my country's been taken hostage. Out now: Belarus bans citizens (whoever is not a state official) from leaving the country. In the air, in the streets, in homes, in jails, Belarus is being held hostage.https://t.co/RUjjfqiZys

Now only permanent residency in another state will allow #Belarus|an citizens to leave the country using the land border. This authoritarian government feels very comfortable making Belarusian citizens its hostages and cutting transnational links with the Belarusian diaspora https://t.co/9imp6mpcdO

The State Border Committee said there are some exceptions to the travel ban, including for Belarusian civil servants on official trips and state transport staff. However, Belarusian citizens with foreign residence permits will only be allowed to leave the country if they have permanent residence in another state. Temporary permit holders are barred from leaving Belarus via land travel.

The new travel rules also apply to foreign citizens: those with temporary or permanent residence permits for Belarus are barred from leaving, while visitors from “red” list countries can only leave after a 10-day period of self-isolation, as part of public health restrictions due to the pandemic.

Valery Kavaleuski, a foreign affairs advisor to opposition leader Sviatlana Tsikhanouskaya, who lives in exile in Lithuania, criticised the travel restrictions on Twitter.

Lukashenka's regime's severely limited the right of Belarusians to travel asserting that certain grounds (residency abroad) aren't sufficient to leave Belarus. Yet the Constitution stipulates no conditions at all. Outright violation of the law by @GpkGovBYhttps://t.co/QZliAzNEKu

The land travel ban comes amid near-blanket restrictions on airspace around Belarus, after the state's military scrambled a fighter jet to force the landing of a Ryanair flight in Minsk to arrest Raman Pratasevich, an opposition journalist who was on board. He later appeared on Belarusian state TV in an interview-confession that regime critics have described as “under duress”. EU representatives and other officials condemned the move an act of aerial piracy and urged European airlines to seize flights to and over Belarus. In response, state airline Belavia cancelled all flights to the EU shutting down the majority of escape routes for Belarusians.

To exert further pressure on Lukashenka's government, on June 5 the EU officially banned Belarusian planes from accessing EU airspace or European airports. The ban is part of a broader package of sanctions against Belarus and requires member states “to deny permission to land in, take off from or overfly their territories to any aircraft operated by Belarusian air carriers”.

Airline industry representatives were critical of the move, with Willie Walsh, director general of the International Air Transport Association (IATA), calling it “a politicisation of aviation safety”. The flight ban has drawn criticism from some human rights defenders who argue that it further limits escape routes for those who face state pressure in Belarus. However, independent journalist Hanna Liubakova argued that the blame for the travel restrictions ultimately lay with Lukashenka.

How are people traveling from #Belarus right now? They can still leave through Moscow, Petersburg, Tbilisi or Istanbul. There are options, people are not left without any chance to escape dictatorship. It is not the EU but #Lukashenko who should be blamed for sanctions pic.twitter.com/RRTXJMOWCC