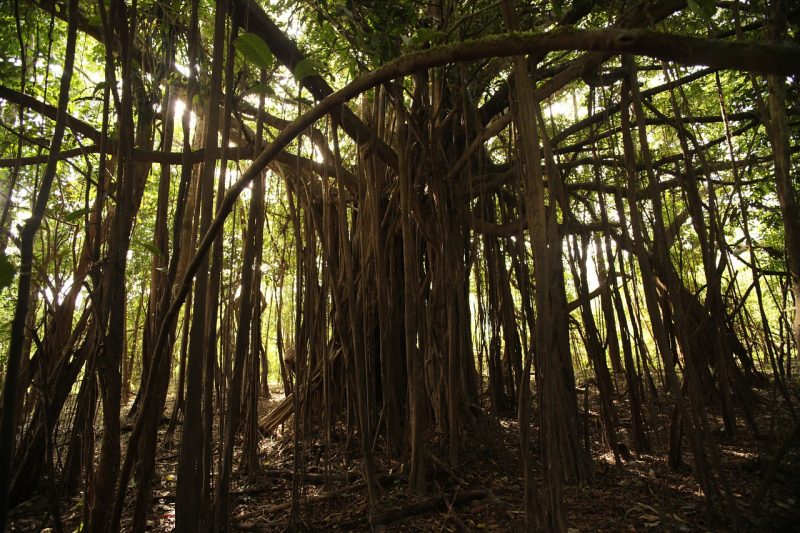 In Peru, Indigenous groups and local NGOs are using innovative advocacy strategies to ensure that Chinese investment in their communities includes them in the decision-making process and doesn't come at the expense of the environment.

Block 58 is an oil and natural gas block located in southern Peru in the province of Cusco of nearly 4 trillion cubic feet of gas reserves, and it has been an important investment hub in recent decades, particularly for Chinese oil and gas company China National Petroleum Corporation (CNPC).  Block 58 also overlaps with protected natural reserves of the Amazon rainforest as well as the traditional territories of various Indigenous communities such as the Tangoshiari, Kirigueti, and Kochiri.

These Indigenous communities and local NGOs demand that extractive companies operate there with greater transparency, respect for the environment and their rights as Indigenous peoples.

Denisse Linares, an advocate for the rights of Indigenous communities through the NGO Rights, Environment and Natural Resources (DAR for the Spanish acronym), claims that new modifications to projects in the Block 58 are being conducted without the participation of citizens.

To cope with the situation, a coalition of non-governmental and Indigenous organizations came together to push the Peruvian government to better protect Indigenous consulting rights and to hold companies accountable.

“Prior consultation is key because it informs the communities of the situation, on the possible impact of the projects to their lives,” Linares told Global Voices through WhatsApp. Despite the region’s wealth in natural resources and the foreign investment influx, Indigenous groups have not benefited from an improvement in rights or living standards, with 23 to 26 percent of the local population currently living in poverty, according to reports. 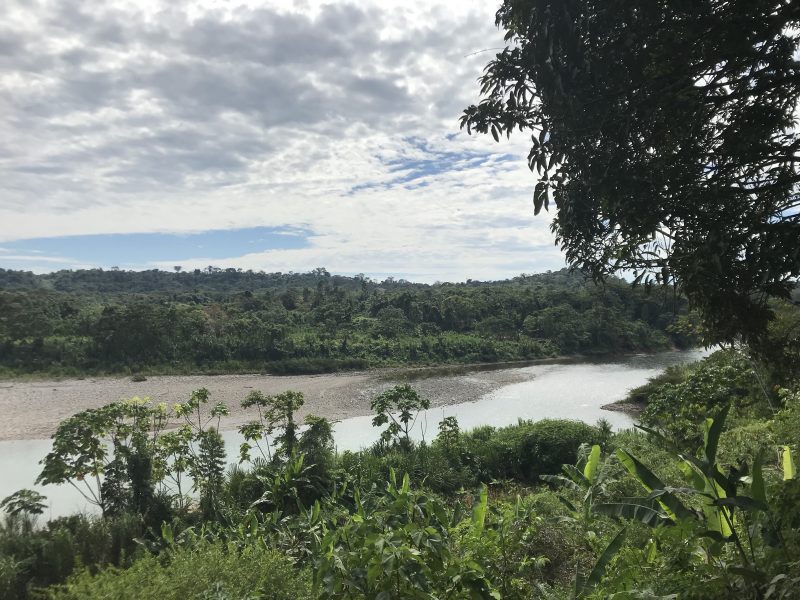 Amazon forest in Peru, near Block 58. Photo from DAR, used with permission.

The key player in Block 58 is China's largest oil and gas company, the China National Petroleum Corporation (CNPC). The giant oil company, which claims to be the third-largest in the world, was granted permission by the Peruvian government to explore and exploit Block 58 in 2017. The company will purportedly invest up to $4.4 billion USD by 2023.

Over the past three years, China began acquiring strategic energy assets in Latin America as part of its Belt and Road Initiative (BRI). Between 2017 and 2019, 56 percent of BRI energy investments went to oil and gas, while 39 percent went to renewables, according to Natural Gas Intelligence. China is the world's top greenhouse gas emitter.

China’s pledge to peak its emissions before 2030 has increased its thirst for natural gas, which emits about 50 percent fewer greenhouse gases than coal when used to 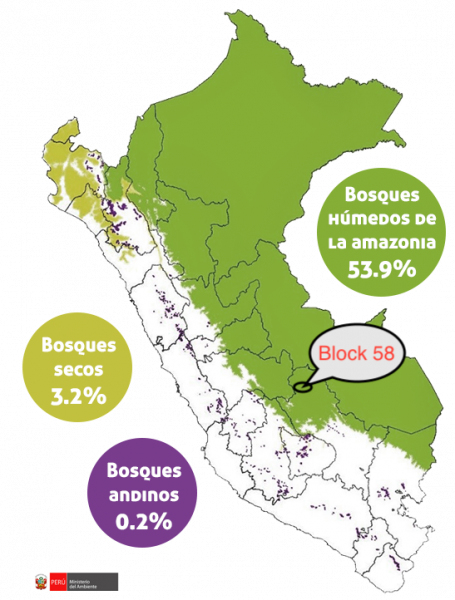 make electricity. Yet, this demand is stretching the finite amount of resources on the Amazon.

The Amazon forest, which covers part of Brazil, Peru, and Colombia, is home to half of the tropical forests that remain on earth, with a known richness in biodiversity. Because the forest sits on large reserves of oil and gas, it is affected by the unprecedented gas extraction in the region and the intensive construction of roads – one of the most important causes of deforestation in the Amazon. Maintaining the forest cover of the Amazon is also a key piece in reducing climate change.

Studies have also shown that Indigenous peoples play a crucial part in environmental conservation. But the exploitation of hydrocarbons in Peru has affected their lives for decades, since Shell discovered the first deposits in the Ucayali region in the 1980s, according to DAR.  Now, Indigenous Peruvians face a similar challenge from CNPC.

The Amazon's Indigenous people have acquired great knowledge of the forest through thousands of years of observation, including how to regenerate the native ecosystem, according to a report by Amazon Frontlines, an NGO promoting the preservation of the Amazonian environment. 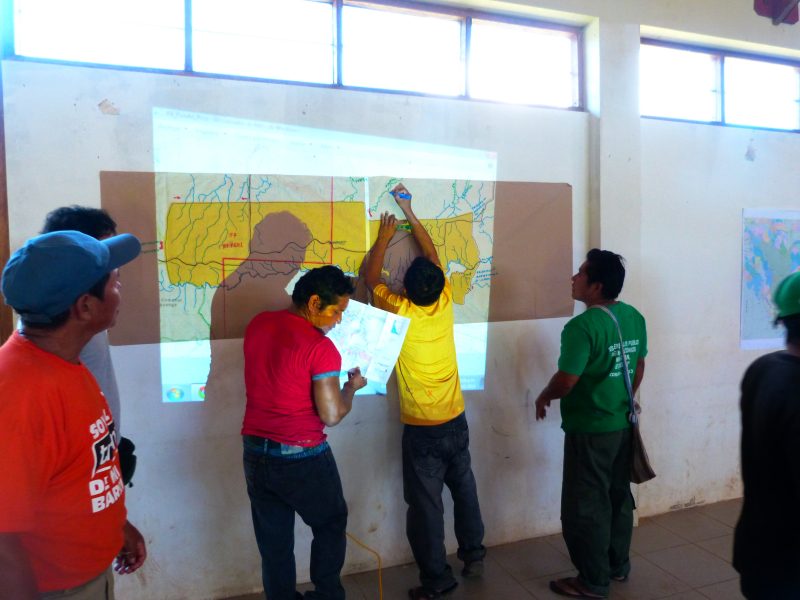 International scholars have also pitched in. In a recent 2021 study, Dr. Kerry Ratigan wrote that the losers in these projects “tend to be poor, Indigenous, rural communities who suffer the environmental consequences with little economic benefit, but the Peruvian government continues to favor resource extraction.”

A year later, China, by recommendation of the United Nations, adopted some of the groups’ demands. It agreed, for example, to encourage its projects to be compatible with human and environmental rights. China also agreed to consider establishing a legal framework to ensure that the activities carried out by its industries do not undermine human rights abroad, among other measures. 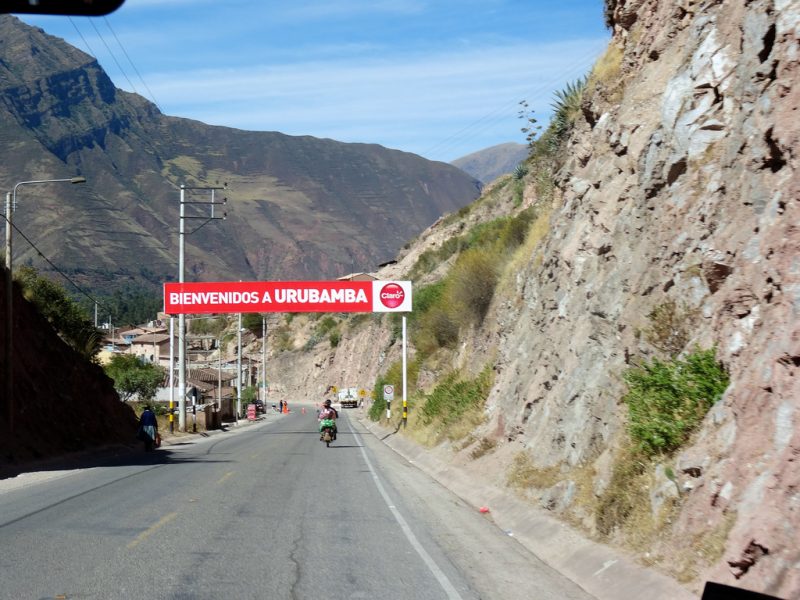 Entry to Urubamba district, where Lote 58 is located. Photo from DAR, used with permission.

However, Indigenous people report that they were still not consulted despite the project moving along.

In October 2020, the Indigenous rights groups wrote a letter to the Chinese ambassador in Peru to request both governments to include an environmental chapter in Peru-China Free Trade Agreement, “in recognition that the complex environmental and social reality of Peru requires strengthening the framework for promoting sustainable development and investment governance.”

Unfortunately, these exchanges did not translate into real improvements in terms of understanding and meeting the demands of the communities involved.

Despite promises from Chinese and Peruvian officials,  it remains unclear if these megaprojects will actually mitigate damage to the environment, improve the lives of Indigenous people and, allow them to enjoy some of the fruits of the huge investments in an impoverished region.