The inconsistencies are creating a rift within the music industry

Musicians protest in front of the Republic of North Macedonia's government building in Skopje, on June 4, 2021. Photo by Vasil Buraliev/VBU Music Registry, used with permission.

This story was originally published by VBU Music Registry. This edited translation is republished by Global Voices with their kind permission.

Macedonian musicians held a protest in front of the Republic of North Macedonia's government building on June 4, expressing dissatisfaction with the ‘discriminatory’ manner in which the country's anti-COVID-19 measures are being relaxed. Tight restrictions have prohibited many performers from earning a living.

The protest, organized by the association Muzika Sega! (Music Now!), blocked midday traffic on one of the busiest boulevards in the center of the Macedonian capital. Representatives of a disgruntled segment of the local music industry wore black armbands to declare that Macedonian music is ‘dead’. By observing two minutes of silence, the protesters performed a symbolic burial of live music as an art form. The new government measures, announced June 2, allow live music to be played at weddings, but not in other commercial settings such as bars and clubs. 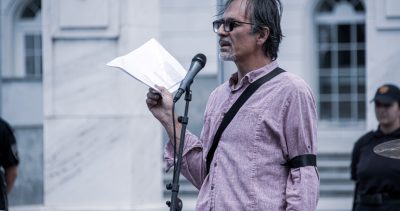 Bass guitarist and Muzika Sega! president Trajko Simonovski – Taci said that he considers the latest easing of restrictions ‘discriminatory and insulting to the intelligence of concerned musicians’. These performers, he explained, had lost their patience, taking to the streets in protest after having been ‘thrown to the streets’ due to their inability to work.

According to Simonovski, the authorities have only declaratively and partially accepted the musicians’ demands. While some musicians are allowed to play at weddings, artists who would typically perform at bars, restaurants, tea and coffee houses are still being barred from exercising their right to work — as stigmatized today, he claims, as lepers were in the past.

During negotiations with the government, Simonovski said they jointly agreed there was a need to create a registry of musicians in order to determine how many people were actually being affected by the live music restrictions. After Muzika Sega! compiled such a list, he continued, the authorities failed to respond.

Protesters complained that the authorities have not explained why they have allowed live music, first at open air shows in May 2020, then at big concert venues that summer, and more recently at weddings with up to 100 guests, but still forbid small-scale live events at clubs and bars. The new set of government measures, which includes subsidies for out-of-work musicians, uses the term ‘licensed musicians’, even though there's no such legal category in North Macedonia, and no chamber of commerce which would issue such licenses. 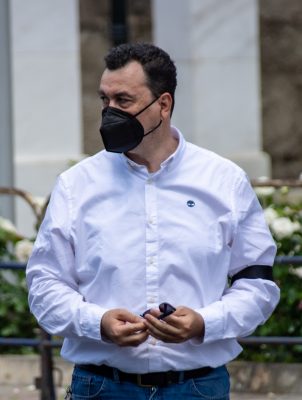 Jazz singer John Ilija Apelgren is one of the people who have been directly affected:

As an individual, independent artist I can make a living only through live performances. I have been forbidden to do my work without any valid reason, alongside my colleagues who don't sing, but play instruments or are DJing. They too can't exercise their  right to earn a living and feed their families.

Maybe we should have brought our families too, so they can tell the representatives of this white building behind me [the seat of the government] how they have been surviving, during these last 15 months without income. How can [people] pay tuition or rent when they don't have family members who are pensioners or employed in state administration?

Those who forbid us to work seem to have forgotten the musicians who are not employed by state institutions such as the Public Broadcasting Service, the philharmonic, national opera and ballet, or Tanec folk ensemble. Could the gentlemen from this white building try to live 15 months without their salaries? This policy will have long-term consequences. Some of our colleagues have already been selling their instruments.

Soon after the start of the pandemic, the government of the Republic of North Macedonia enacted lockdowns, made it obligatory to wear masks both inside and (until June 3) outside, as well as to observe a distance of two meters, and — similar to other countries — enforced restrictions on gatherings.

However, the rules made exceptions for restaurants and bars. In such venues — both inside and on terraces — only waiters were obliged to wear masks, and physical distancing was near impossible to implement, as up to four people could sit at a table. Updated measures now allow up to six customers to sit together at a restaurant table.

Apelgren demanded an explanation for such ‘illogical’ decisions, including the discrimination against certain types of musicians:

How did  they decide that [only] a musician playing at a venue is a carrier of the infection? Do they assume the virus uses musical waves to travel? It's ridiculous to consider a group of people who all stick their forks in the same salad bowl safe from infection while sitting at the same table, while the DJ playing music from a corner is considered a public health hazard.

In practice, allowing live music at weddings only is driving a genre rift within the music industry. Those who play folk music, considered essential to such celebrations, are in a privileged position, while the remaining prohibitions disproportionally affect musicians playing rock, hip hop, jazz, blues or techno music.

As at the time of publication, the government of the Republic of North Macedonia had not issued a response or given a reaction to the protesters’ demands.