Despite being under the regime's control since 2018, 'Daraa remains present' 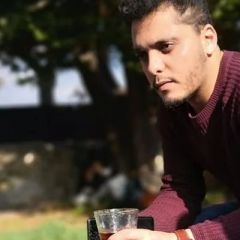 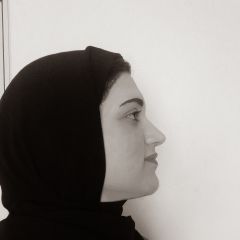 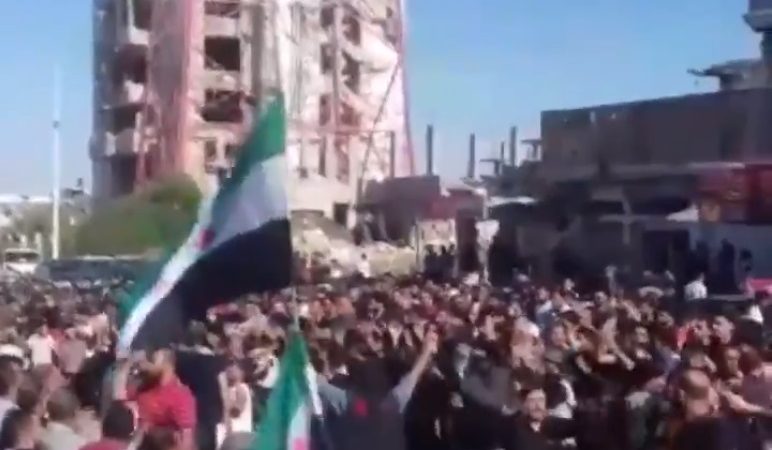 An image from a video clip showing Syrians massing in Daraa against the Assad regime and the presidential elections.

While Syria ostensibly witnessed a presidential election on May 26 that was celebrated by the regime and some parts of the country, several regions in the Daraa governorate in the south of Syria staged a popular uprising against what they described as a ‘farcical play’, holding demonstrations and strikes, while insurgents attacked pro-regime entities.

The elections were held as scheduled to elect Bashar Al-Assad as the president of war-torn Syria for a fourth term extending to 2028, after his election in 2000, 2007 and 2014. To complete what many people in Syria, Europe and the United States, considered as a ‘fake scene’, the regime expectedly declared Al-Assad the winner, and the president of the Syrian state with 95.1 percent of the votes, totaling around 10 million citizens.

However, in Daraa, the cradle of the Syrian 2011 revolution, and despite being officially under the regime's control for three years, voter turnout across the 200 ballot boxes was very weak. Thousands of demonstrators gathered in Daraa Al-Balad, Al-Harak, Nahtah, Bosra Al-Sham, Bosra Al-Harir and Al-Jizah in the east of the governorate, voicing their rejection to the elections, according to the Horan Free League, which focuses on southern Syria news. There, demonstrators chanted for the overthrow of the regime and raised many slogans, including: “No future for the Syrians with the Killer.”

This isn't from 2011, it's a video from a major protest today in #Daraa, next to the Omari Mosque, in which demonstrators are chanting against #Assad & the revolutionary flag is being flown.pic.twitter.com/C8zDU7CXG6

What is happening in Syria is that, despite everything that has happened and is happening, thousands of Syrians go out around Al-Omari Mosque in Daraa, where demonstrations had begun ten years ago, to announce the farcical night that is falsely called elections. The revolution goes on and that the nation want life.

Meanwhile, several villages in the east and the west of the governorate, including Dael, Nawa, Jiza, Jassim and others, announced a strike, closing the shops and cutting off roads connecting them with the city for several days, as an expression of their opposition to what they called “the electoral play”.

Several areas of the governorate witnessed a military escalation on polling day as a result of regime-affiliated sites coming under attack by armed opposition, along with polling stations and pro-regime figures.

#Ahraar_Houran
Since Thursday morning, Al-Assad's forces launched a campaign of raiding and searching homes in Dael city in the central countryside of Daraa, and arrested a number of civilians and burned another house, in retaliation for the attack on the forces last night in the partisan division in the city.
Al-Assad's forces imposed a curfew in the city.

Media activist from Daraa governorate, Hussein Al-Muhammad, said anonymous persons targeted with grenades the municipality buildings where ballot boxes were located in Sidon, Al-Harra, Nimr and Al-Naima, without causing any casualties, in addition to the homes of Al-Baath party members in Sidon and Al-Naima, in the east of Daraa, being attacked with automatic weapons.

Speaking to Global Voices (GV), Al-Mohammed added that other military points of the Syrian regime were targeted with machine guns, such as those in Eastern Karak, and military points belonging to the Air Force Intelligence between Ghassam, Al-Sahwa and Western Maliha, and as well as regime-affiliated targets in cities like Nawa, Eastern Karak, Al-Musayfirah, Al-Sanamayn, Hajjah and Khirbet Ghazala.

In Daraa's countryside district of Dael, the headquarters of Al-Baath party division came under attack by unknown people with machine guns and RPG launchers, as violent clashes took place in the city's neighbourhood that lasted for hours. As a result of that, the regime forces suffered many losses.

In response to these attacks, local sources said the Syrian regime forces imposed a curfew in Dael since the early hours of the polling day, announcing that through mosque loudspeakers. In the morning of Thursday, May 27, the regime launched raids and search campaigns, arresting a number of civilians for a few hours before releasing them.

The anti-regime protests in Daraa governorate were not particularly linked to the elections. According to Walid Al-Nawfal, a journalist at the independent Syria Direct, Daraa has been witnessing continuous protests since the Syrian regime and its allies took control of it in the summer of 2018.

As a reminder — #Daraa remains chronically unstable & quite clearly not “in regime control” as might generally be understood.

In the past week alone, 8+ #Assad-linked individuals have been killed in insurgent attacks. https://t.co/gpTHzecFIG

Al-Nawfal told GV: “We always see peaceful movements in Daraa demanding the release of detainees and expulsion of Iranian militias,” adding that large swathes of Daraa always react to important events happening in Syria through rallies, which have not stop since the signing of the Russia-brokered settlement agreement between the regime and the opposition in July 2018. Therefore, as he puts it, “Daraa is always present.”

From Al-Nawfal’s point of view, the Syrian regime considers several areas of Daraa to be out of its control, and under the control of settlement factions and negotiation committees, so it is likely that the regime will launch military operations with the aim of extending its influence in these areas and empowering local militias associated with it, which will, in turn, result in clan disputes, and in those opposing the settlement to move towards the north, like what happened in the village of Umm-Batna in Quneitra city in mid-May.

As for the impact of the popular uprising on the presidential elections, Al-Nawfal noted:

Al-Assad voted today from Douma city in the countryside of Damascus, which was one of the most prominent opposition strongholds, and one of the cities that have been most hit and lost many lives at the hands of the regime and Russia, to send a message to Syrians and the world that the war is over and that he is the victor. But the Daraa's protests that have been going on for days have thwarted the play which Al-Assad tried to pass.

Al-Nawfal predicted a long-term crackdown by the regime in response to the protests, through arrest campaigns that may target shop owners who declared a strike and closed their stores.

The United States, France, Britain and other members of the UN Security Council rejected the result of the Syrian presidential elections in advance, while the High Representative for Foreign Affairs and Security Policy of the European Union, Josep Borrell, emphasized that normalization with the Syrian regime, lifting sanctions, or supporting reconstruction efforts cannot be achieved unless a political transition schedule is set in accordance with UN Security Council resolutions.