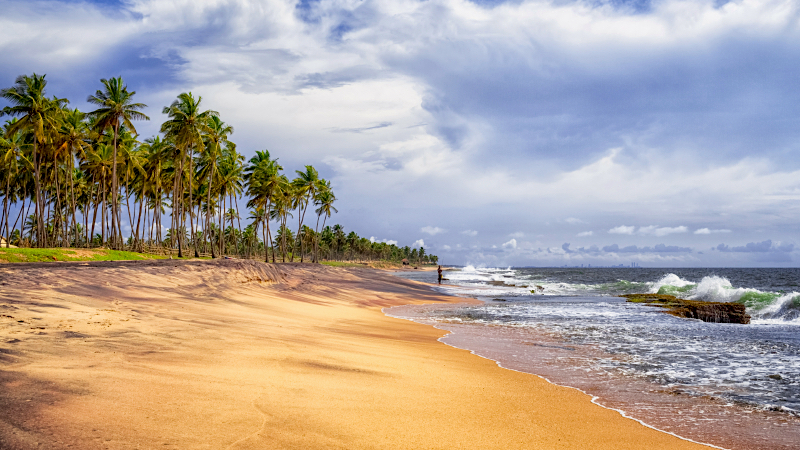 The pristine sandy beaches in Negombo, Sri Lanka are threatened by plastic and burnt debris from the sinking container ship X-Press Pearl off the coasts of Sri Lanka. Image from Flickr by Amila Tennakoon (2011). CC BY 2.0.

On May 20, 2021, a Singaporean container ship X-Press Pearl had caught fire on the Laccadive Sea, 18 kilometres off the west coast of Sri Lanka near the capital Colombo. After a week of firefighting efforts, the vessel was declared a total loss and had started to sink releasing burnt debris. The X-Press Pearl was carrying 1,486 containers of chemicals and cosmetics, including 28 containers of plastic pellets and 25 tonnes of extremely combustible nitric acid and sodium hydroxide, which were loaded from a port in Gujarat, India. Apart from the burnt debris, it also threatens an oil spill as the ship had more than 300 tonnes of fuel in its tanks.

Explosions were heard as the ship burnt in the fire for the past two weeks and the burnt debris and oil residues have already caused massive damage to the nearby Sri Lankan coastline. The magnitude of the damage makes it one of the worst environmental disasters of Sri Lanka.

Reportedly, the ship had a nitric acid leak that had started on May 11 and the vessel arrived in Sri Lanka asking for help after other nearby ports refused to allow it in with its leak.

The Sri Lankan navy has rescued 25 crew members from the cargo ship after explosions ripped off sections. The Indian navy assisted in controlling the fire breakout.

Waves of microplastics and charred debris from the burning vessel have already reached the nearby popular beaches of Negombo in the past two weeks.

Close to 3 billion plastic pellets may have been released into our waters. With a possible oil spill too as the vessel sinks, we are witnessing the worst marine pollution disaster in our lifetime in Sri Lanka. #MVXPressPearl #SriLanka pic.twitter.com/iTmqs3nDD2

The Sri Lankan authorities have banned fishing on an 80-kilometre stretch of coast which affected over 5000 fishing boats and the livelihoods of fishermen depended on them.

This is an unprecedented marine environment disaster!

Stretching from Wattala to Negombo, the coast has become densely polluted. Debris like vessel wreckage, floating container parts, burnt cargo and chemicals along with oil and ash have covered the surrounding sea. The marine env impact is severe. #MVXPRESSPEARL #shipwreck #lka pic.twitter.com/DeZsjWFM8C

The organisation also highlighted the consequences in a statement on Facebook:

Large areas of the Western Province coast have been affected due to the recent MV X-Press Pearl ship accident. Due to the complexity of its cargo, several environmental challenges have arisen. These include high toxic levels both at sea and on the coast. A bunk oil spill, ashes and ship debris at sea and on the shorelines, high amounts of plastic pellets spilled onto the ocean now covering large swaths of coastline along the western side of Sri Lanka, toxic fumes mixed with monsoon rains resulting in toxic rain and poor air quality.

Although the impact on biodiversity is yet to be assessed, there are several reefs located in the area and the fauna and flora associated with the reefs will be seriously affected. Turtles, moray eel and stingray have washed up on beaches.

Hundreds of members of armed forces and other personnel are assisting the cleanup to remove debris in dozens of locations across the coast.

Cleanup of debris from #MVXPressPearl continues
for the 6th day.

14 priority areas have been identified and MEPA says there is steady progress ?? #SriLanka #lka pic.twitter.com/oYvpoRxb7V

The Sri Lankan authorities are devising strategies to mitigate the environmental damage and has started an investigation into the cause of the accident.

MEPA has prepared a strategic plan in case there is an oil spill from the ill-fated #MVXPressPearl vessel – @NewsCenterLkhttps://t.co/MtXdUxBuNE #LKA #SriLanka #XPressPearl

A video released by the Marine Environment Protection Authority of Sri Lanka on Facebook shows how the small plastic parts from the sinking MV X-Press Pearl ship are being painstakingly removed.

However, the fear is that the currents will take the debris to the West coast of Sri Lanka. Charitha Pattiaratchi, Professor of the University of Western Australia, shared a projection of the path of the plastic nurdles:

Meanwhile, the Sri Lankan authorities decided to sue the owners of X-Press Pearl for marine pollution and launched an investigation.

This kicked off a debate on the country’s legal framework for such matters. Kamanthi Wickramasinghe argued in an Oped on the Daily Mirror Online that Sri Lanka lacks a proper legal framework and preventive strategies to tackle a big maritime disaster such as this.