Some have become the buzzwords of the resistance 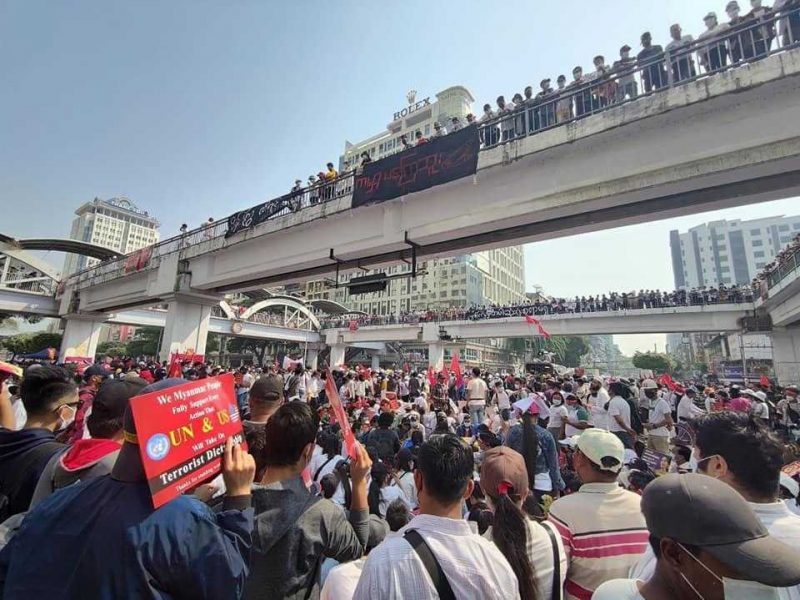 An anti-coup protest in Myanmar. Photo shared by a citizen journalist, used with permission.

Myanmar’s defiant anti-coup protesters have been consistent in using creative tactics and symbols to sustain the resistance against the military regime. They are also aware that their protest actions are streamed or posted on social media and global news websites which explain why many of their information materials are written in the English language. For those who are monitoring the situation in Myanmar, it may be easy for them to understand the acronyms in the protest placards and banners, but maybe not for those who are unfamiliar with the country’s recent political landscape.

Below are the common acronyms used by protesters, their meaning, and significance to the coup and the democracy movement. We also included the coup-related acronyms that are often mentioned in news reports.

CDM – Civil Disobedience Movement. Doctors and health workers were the first to refuse to work as a sign of protest to the February 1 coup. They were followed by teachers and other public servants. It also refers to various acts of resistance by citizens who wanted to undermine the military regime like boycotting military-owned businesses.

CRPH – Committee Representing Pyidaungsu Hluttaw. A body created by ousted members of parliament and concerned citizens who do not recognize the legitimacy of the military government.

NUG – National Unity Government. CRPH has declared the NUG to be the legitimate government of Myanmar. It is mainly composed of ousted parliament members and leaders of various ethnic parties opposed to the junta. It is seeking global recognition as the government representing Myanmar citizens who wanted the restoration of civilian rule.

NLD – National League for Democracy. It was the opposition party that won in the historic 2015 general election. Myanmar’s ruling party until the February coup. It dominated the 2020 election which reflected its continuing popularity, even if it faced accusations of failing to reverse the repressive laws of the junta era.

USDP – Union Solidarity and Development Party. Myanmar’s military-backed party which ruled the country from 2010 to 2015. It failed to defeat the NLD again in 2020.

GSCN – General Strike Committee of Nationalities. This was established in February to coordinate anti-coup protests representing opposition groups, ethnic forces, and other parties which are resisting the junta.

SAC – State Administration Council. The name of the government whose members were appointed by the military.

MEC – Myanmar Economic Corporation. Another conglomerate owned and managed by the military. The CDM targets both MEHL and MEC-affiliated companies.

EAO – Ethnic Armed Organizations. Myanmar has more than 100 ethnic groups, some of which have been waging an armed struggle to assert their right to self-determination. During the crackdown launched by the junta, many activists sought refuge in territories controlled by EAOs. Some ethnic parties also vowed to protect anti-coup protesters and citizens opposed to the junta. The NUG included EAOs in order to build a stronger unity against the military government.

PDF – People’s Defense Force. Security force created by the NUG to protect civilians from the junta. It is seen as a precursor to the formation of a Federal Union Army as replacement to the junta’s Tatmadaw (military armed force).

UEC – Union Election Commission. It is the government body in charge of the November 2020 election. The junta accused it of failing to stop the massive cheating in the electoral list which led to the coup. UEC said the military allegations are baseless. International observers monitored some glitches but they concluded that the elections were generally fair and peaceful.

AAPP – Assistance Association for Political Prisoners. A human rights organization monitoring the situation of political prisoners in Myanmar. Since the coup, it has been releasing daily updates on the number of arrested and killed individuals during the conflict.

22222 – Five twos. It refers to the massive general strike held on February 22, 2022 across the country which showed the popular discontent against the junta.