Scorched summit of La Soufrière volcano in background with pyroclastic density current deposit in foreground, May 13, 2021. Photo by Nadia Huggins, used with permission

It is closing in on two months since St. Vincent and the Grenadines’ La Soufrière volcano had its first major eruption of the 21st century. In those long weeks since April 9, about 20,000 people have been evacuated from their homes; the ashfall has been so intense that it has posed a risk to both wildlife survival and human health, even in other islands and eruptive activity, the effects of which were worsened by heavy rainfall, has been consistent, causing the country's alert level to remain at red for most of that time.

Photographer Nadia Huggins has been there for all of it, from the initial eruption when she went out on a boat to get a (relatively) safe vantage point from which to document the volcano's massive ash column, to the subsequent, ongoing fallout.

Her Instagram page powerfully chronicles the island nation's journey in ways that words cannot, telling stories of uncertainty, courage, loss, grief, hope and resilience. In this two-part series, Huggins explains what it meant to her to bear witness, what everyday life has been like under the shadow of La Soufrière (even now, the country is on orange alert), and what she wants her photographs to contribute to the narrative. She spoke with me via a WhatsApp audio call on June 2. 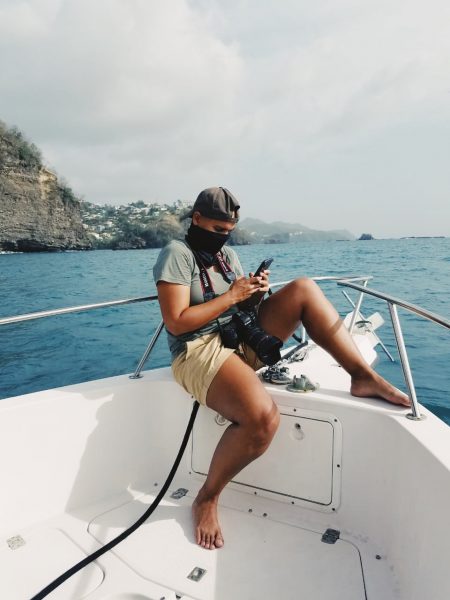 Janine Mendes-Franco (JMF): Your images are emotive and very powerful, yet they feel more intimate than voyeuristic.

Nadia Huggins (NH): I think it boils down to the way you approach the ethics of photography. Especially now, photographers have a responsibility to be considerate about what type of images they put out into the world. It's very easy to photograph a house buried under ash to try and get that gut reaction out of people, but for me, I try to go into the situation asking questions like, ‘If this were my house, how would I feel about somebody photographing and sharing it in this way?’ You really have to think of the intention behind the images. Of course you want people to know that there's all this horrible destruction that's happened, but what do you want [the message to be]? Do people need help? More relief? Long-term assistance? How is it socially impacting people? What is their mental health going to be like afterwards? I try to be very mindful with what I post.

JMF: Your photos often focus on details others might miss, like your shot of pumice floating on the water close to Chateaubelair island on the leeward coast. What elements, for you, constitute a good journalistic photo?

NH: (Laughs) Sometimes I just wing it! I organically respond to what seems interesting. We all have a very particular range of perception of the world and as a photographer, your responsibility is to kind of zoom in or change your perspective ever so slightly when looking at things. Sometimes the most powerful thing that's going on is about eliminating a lot of the other elements around it—and that decision you make is really based on your own perception and what you might think is important, so it's a very personal approach to photography. I didn't even realise ash floated on the water like that, so if I didn't know that then how many other people out there don't know that?

JMF: Your photography locates itself at the intersection of photojournalism and art.

NH: My practice has always been moving between documentary and conceptual. I'm always trying to question how that fine arts side comes into play, and it's mostly through composition for me, and that's where the perception and perspective also comes into play—what I'm looking at and how I'm looking at it. You still want an element of truth in there; you don't want to completely manipulate what you see to the point where it's unbelievable. People also just want to be pulled in by something that looks different but still feels familiar, and that's always been the roots of my practice: trying to find that universal familiarity in scenes.

JMF: At the same time, many of your photos capture the drama of the eruption; your shot showing the contrast between the clouds and the ash plume comes to mind. What has the experience of documenting these eruptions been like for you?

NH: I honestly have no idea what I was thinking, getting onto a boat going into the red zone! As soon as the first eruption went off, friends called me: ‘Are we gonna do this?’ We all just made a decision collectively, without even realising it, that we were going to document it and we just went for it and were lucky to know other people who were just as crazy as us: one person to drive the boat, one to be on the phone [with The University of the West Indies Seismic Research Centre] to make sure that we were in safe range—so it wasn't totally irresponsible.

When we got there, the whole place was just white with ash. You couldn't see anything, just bits of islands and then, as the cloud started to come up, everyone [thought] it was the old ash cloud [but] there was a new eruption happening and as it started to rise quicker, I just got terrified. We had no idea how [high] it was going to rise, if there'd be pyroclastic flow, so we needed to go. As the boat was driving off, it started to rise and I was just in awe. It didn't quite register that what goes up has to come down. Everybody on the island was just taking pictures, taking selfies, and by the evening, when the ash started to come down, falling like snow, you could hear stones. That's when the reality started to sink in and I instantly felt depressed.

JMF: Some of your images have qualities of still life. Can beauty coexist with bearing witness?

NH: There wasn't any wind that day, after [the eruption]. The place was entirely still; nothing was moving. You wouldn't even see ash blowing on that first day. The place was just dark; like a black and white photo. You step outside and everything was covered in that grey. When you walked, the ash would move away and the colour would come back into the ground. I was just looking for these iconic symbols of St. Vincent, you know? The breadfruit leaf has been a part of our old flag and we have so many trees here … part of our national dish and I think Captain Bligh brought the first breadfruit tree to the Western world through St. Vincent, so there was some kind of significance in it for me. This is in my mother's garden […] I was walking around and just observing, saw it, and something about it was really striking. It felt kind of poetic. I didn't place the leaves in the image in any particular way; they fell that way, so it's looking for those moments that seem compositionally interesting. With still life, you place things in a particular way, but this is nature just placing things in the way that it intended. I try not to interfere with things.

JMF: A lot of your previous work, which has been exhibited internationally, has centred around the ocean both as a subject in itself and as a force that helps shape regional cultures and destinies. What do your La Soufrière seascapes communicate? One of my favourites was the documenting of the ball bait with the cruise ship in the distance.

NH: That was a strange moment. As we were going into the red zone to document that explosion […] my friend Kai just wanted to face some of his fears. He'd never jumped into the ocean so far away from land. There were these massive bait balls around the orange zone because all the fish were now out of the red zone—nothing could survive in there—but the thing with bait balls is that there's something […] below trying to capture the fish. It could be sharks or whales—it's kind of terrifying to think about it—and Kai just jumped into the water with the GoPro trying to see if he could get anything. The cruise ship in the background was for the evacuees but [at the time] it didn't have anybody on it, so it was strange [seeing it] floating out on the horizon just waiting for something to happen. It really just felt like a powerful moment that I wanted to capture.

NH: When I started taking the underwater images, I was trying to think about looking back at an island in a geological way. How does an island look below the sea? Geologically, what are those structures? Obviously my camera can't capture that scale, but I was interested in that aspect of it. We know that most of these islands are volcanic—that's how the Caribbean was formed—so at one point, we were all under water and over millions of years, these formations happened and now we're living on these islands. This gradual process of the landscape being transformed through these eruptions is interesting to me, so looking at it from the sea is me still trying to get a sense of that transformation.

In the second instalment of this post, Nadia discusses the concepts of change, resilience and hope, and what's at stake for the Caribbean.