Does it matter when the restaurant opens if you can't afford a meal? 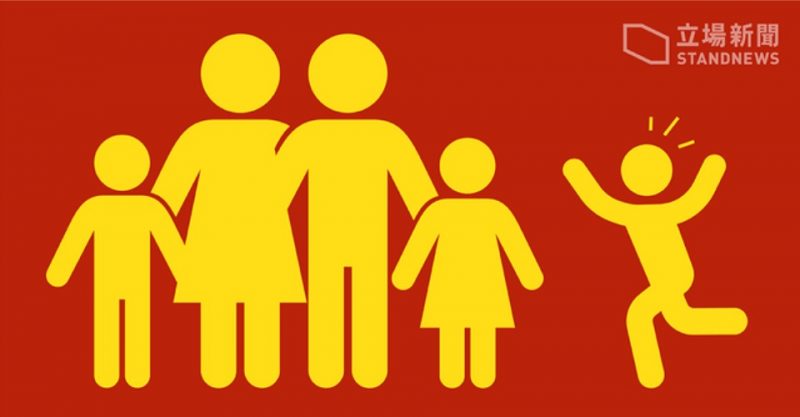 If people won't have two children, will they consider having three?

China has decided to relax its two-child policy to a three-child policy after the country saw a steep decline in the birth rate in the 2020 census. The move has been greeted by a wave of ironic commentary on social media platforms.

China's controversial “one-child policy” was enforced from 1980 but was eased in 2015 as the government anticipated problems supporting an ageing population.

Since then, China’s birth rate has declined. In 2020, just 12 million babies were born.

The decision to introduce a new third-child policy was made on May 31 at China’s Politburo Committee, overseen by President Xi Jinping. It was presented to the public in lieu of Children’s Day on June 1.

The policy was introduced with a package of supporting measures – restrictions on marriage dowries, protections for women's employment rights, maternity leave improvements and insurance, taxation and housing benefits.

Nevertheless, a poll posted by state-owned Xinhua News on Weibo, saw 90 percent of respondents indicate that they would not consider having a third child: 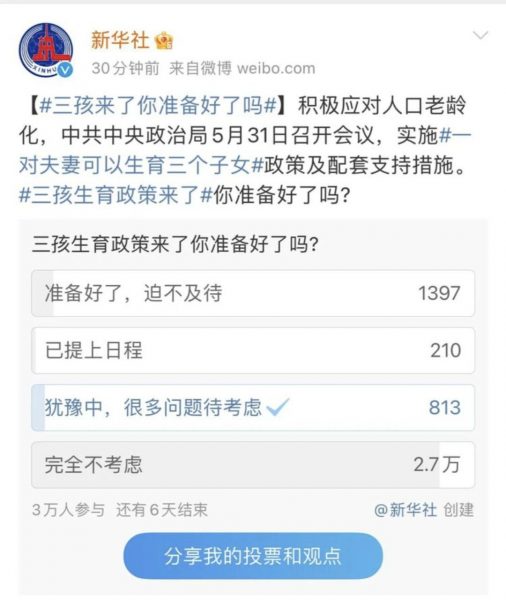 Many asked the question: is the state going to pay child-rearing expenses?

My mobile phone screen is flooded with news about the third child policy this morning. I don’t think anywhere else in this world can order a woman's uterus to function through decades of policy meetings rather than incentives. In the past, women were forced to sterilize or they would have to pay a fine and be dismissed by their work unit. Now they want you to raise three [children]! Are you going to reimburse them or give them back their jobs now?

As serious online criticism of state policy can be censored or even punished, dark humor reigned.

Some speculated on the burden that three children would place on couples from the single-child generation born in the 1980s and 1990s, who have no siblings to help them look after their parents.

Hahahaha, for the single-child generations who were born in the 1980s and 1990s, a married-couple would have to feed 4 elderly parents and 3 kids. They would have to work until 65. By the time they could get their pensions, they would be dead…

Other netizens called such a life model “the life of garlic chives”, in reference to a popular online meme depicting ordinary Chinese as exploited by a political and economic system premised on rent-seeking.

One viral post on Weibo that this author republished on Twitter mocked: “I wish you a long life so that you have to take care of nine grandchildren at the age of 65.”

The policy’s socioeconomic implications for women also earned a lot of attention.

#Three child policy has come# Three children will definitely strengthen discrimination in employment. Will corporations now expect female staff to take three maternity leaves?  Though only a minority of women will choose to give birth to three children, all women will be discriminated against. Unless men’s parental leave is made equal with that of women, the problem of employment discrimination will not be solved. Employment decisions are made internally within corporations. How would we intervene?

#Three child policy has come# The state is pushing women to the edge… just read an analysis, if a woman has to follow the policy, from the date when she gets married, she has to [serve the family] until she reaches 50, then she has time to become herself. My suggestion is not to get married and not to give birth. Just figure out what you want first.

Some tried to apply the logic of the policy to other real life situations:

Back in our villages, if the sows did not bear piglets, the farmers would find out what were the problems – whether the farm was too small, the hygiene was too bad or the sows were under too much pressure. Once you attended to these problems, the sows would give birth to piglets. Nobody would hand down a document to force the sows to give birth.

Some netizens fretted that more coercive government policies might emerge if the three-child policy failed to stimulate population growth:

Editorial Note: The mainland Chinese sources for the above quotes are intentionally hidden due to security concerns