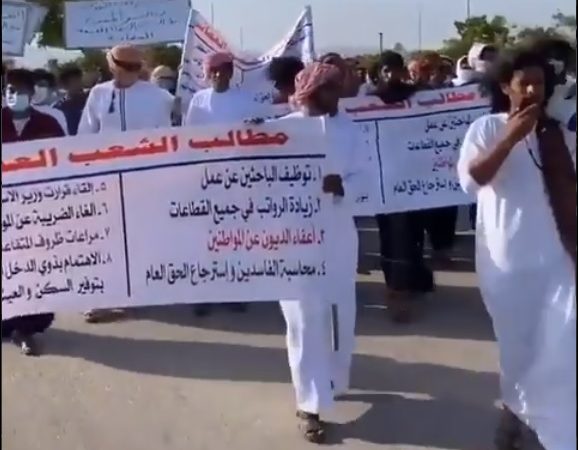 Screenshot from a video shared on Twitter, showing one of the protests in Oman. Demonstrators carried signs and chanted in demand of jobs and better living conditions.

Groups of protesters rallied in a number of cities in Oman over several days in late May, demanding jobs and better living conditions, and showing a rare display of dissent in the Gulf country—the first for its new ruler, Sultan Haitham.

Amidst low oil prices, and with COVID-19 weighing on the Gulf state's coffers, Oman's hydrocarbon-dependent economy suffered a double blow, shrinking by 6.4 percent last year, according to the International Monetary Fund.

Thousands of Omani workers faced job loss or reductions in salaries under COVID-19, prompting the Ministry of Labour to hold negotiations with dozens of employees in an attempt undo the damage, but many still suffered. Unemployment in Oman is around 20 percent among youth, who account for nearly half the Omani population of roughly 2.7 million people.

This drove Omani protesters, from Sohar in the north through to Salalah in the south, to take to the streets starting on Sunday May 23, chanting demands like the ones made at rallies a decade ago, when Oman experienced its own small version of the so-called Arab Spring.

Protests took place in the cities of Ibri, Nizwa, Rustaq and Sur as well, according to posts on social media.

#Oman : Amid rare protests a young man says he doesn’t want to destroy anything – he just wants a job #صحار_الآن pic.twitter.com/kNpBf26hn6

While rallies on Sunday and Monday were met with a heavy security presence and police firing tear gas and arresting demonstrators, Tuesday's marches were peaceful, with social media posts showing images of police officers distributing water bottles among protesters braving the summer heat.

The protests are the first for Sultan Haitham, who took the helm in January 2020 following the death of his cousin Sultan Qaboos, who assumed leadership of Oman in 1970 and was at the time of his death the longest-serving ruler in the Middle East and Arab world. Along with the throne, Sultan Haitham inherited economic challenges that have made Oman one of the most vulnerable economies in the Gulf. Unlike the millions of other Arabs across the region who took to the streets back in 2011, Omanis are calling not for a political and economic makeover, but rather jobs and an end to corruption.

While richer Gulf countries stepped in in 2011 with generous aid packages to Oman to alleviate living conditions and placate the populace, it remains unclear whether similar support will be provided now, as Muscat's political views have put it at odds with its neighbours, who are also grappling with their own economic problems.

In response to security forces’ dispersal of the protests, the Gulf Centre for Human Rights and (GCHR) Omani Association for Human Rights (OAHR) urged the authorities in a joint statement “to respect freedom of expression and assembly”, adding that “the authorities attempted to restrict the media from reporting about demonstrations.”

The Omani government should immediately end the policy of silencing and restricting public freedoms, including freedom of peaceful protest and freedom of the press. The authorities in Oman must respect public freedoms, including freedom of expression and opinion, on and off the Internet. The security forces must fulfill their duties to protect citizens, not to oppress them, while they peacefully demand their civil and human rights

Citing reliable sources, the two groups said that a number of protesters were arrested on May 23 and their whereabouts remained unknown after a crowd gathered in front of the General Directorate of Labour in Sohar was surrounded by security forces on foot and in cars.

Watch: The arrest of some protesters who were laid off their jobs and those seeking employment, and threats via text messages against filming or documenting these events.

The hashtag #الحريه_لعبدالعزيز_البلوشي, or #Freedom_to_Abdulaziz_AlBalushi was heavily used in support of a protester whose speech went viral.

According to the organisations’ joint statement:

Reliable sources in Oman stated that a strongly worded circular was issued by higher authorities to all media outlets, including daily newspapers, not to address the issue of peaceful assembly in Sohar, Dhofar, Salalah and the rest of the Omani regions, otherwise permits will be withdrawn. The authorities were forced to backtrack on this decision later after many international media reported on these events.

Since then, reports on social media have confirmed the release of most of those who were taken in.

The last of the stands in Oman's city of Salalah, in Dhofar province, came to an end, with several participants being arrested early Friday, and most of them released at a later hour. Authorities questioned a number of demonstrators near Ceremonies Square this afternoon, according to their families’ testimonies.

The following day, the official news agency reported that the ministries of defence and labour, based on the Sultan's instructions, were ready to receive job applications.

However, some Omanis doubted that the jobs created would be enough. Commenting on job ads circulated by the Omani military, a Twitter user wrote:

Within 12 hours of opening the registration:
Diploma holders only!
No more than 25 years old!
Males only!
(More than 17 thousands applicants!)
Imagine what is the real number of job seekers!
Imagine how many will actually be accepted!
Do you see the scale of the struggle, Minister of Labour?

Following the uprising in 2011 too, #Oman government absorbed 1000s into armed forces and police.

News reports reveal that now also the same is happening.

Providing jobs in armed forces is not a solution for unemployment. #sohar #Soharprotest #Oman