Some speak of anti-Islam criticism, others praise country's religious freedom 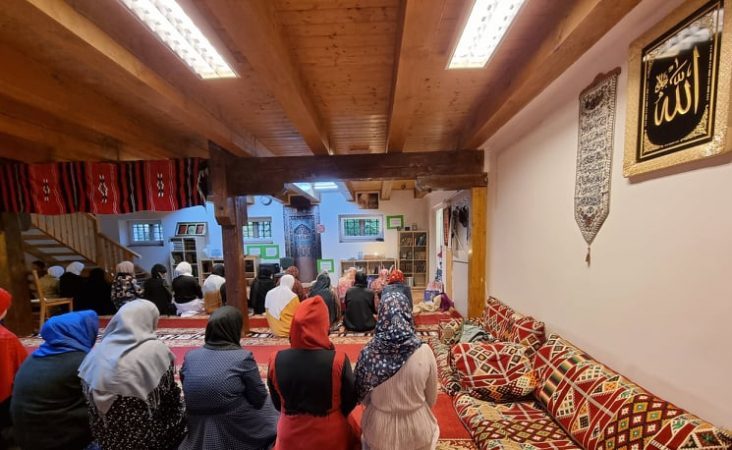 Ramadan in Prague's Al Firdaus Center. After Eid prayer in the room provided exclusively for women. Photo by Elmira Lyapina, used with permission.

On May 13, the Muslim world including the Czech Muslims celebrated Eid Al-Fitr, or the feast of breaking the fast of Ramadan. In Czechia, where Muslims account for less than 0.1% of its 10.7 million people, Islam is often at the centre of much debate and criticism. On the occasion of Eid, female observers spoke of how they see their lives in Czechia as Muslims, and of how they spend and celebrate their holy month.

Like every year, Muslims in the Czech capital of Prague celebrated Eid in the mosque, which is more of a prayer house in the Islamic centre Al Firdaus. In Prague, there is no classical-style mosque. In fact, there is only one minaret in the whole of Czechia, which serves an aesthetic purpose through adding an oriental component to the landscape of the historical castle in Lednice, rather than fulfilling a religious role.

However, there is a number of Islamic community centres that serve as mosques in Czechia, mostly in Prague and Brno, or smaller prayer rooms in other cities. These centres also run educational and charitable activities.

Islam and Islamophobia in Czechia

Although, in principle, it follows European Christian values, Czechia is the second most agnostic state in the European Union. Here, Islam has historically been associated with something alien and even dangerous.

Nowadays, some politicians increasingly use anti-Islam propaganda in their populist speeches, often converging Islamophobia with phobia of migrants, although Muslims in Czechia include local citizens who embraced the religion. Examples of such speeches are ones made by Tomio Okamura, co-founder of right-wing political parties Úsvit and SPD, as well as the Islam v ČR nechceme movement, which translates to “We Don’t Want Islam in the Czech Republic”. These entities participate, organize, or support different events, including writing online articles and blogs, that aim to defame Muslims and Islam.

In 2017, rhetoric incitement of violence led to an attempted terrorist attack against Muslims, when a citizen caused two passenger trains to derail, and vied to blame it on Muslim immigrants. Fluctuating in momentum, Islamophobic views and ideas remain prevalent in Czechia, with Muslim women being the usual main targets for hate speech and attacks since wearing hijabs displays their faith. Anti-Islam attackers often justify their behavior by alleging that they protect human rights values, and are attempting to ‘save’ Muslim women who they say are oppressed and forced into wearing hijab.

“My body – my choice, I am oppressed by those who [dare to] tell me what to wear,” ethnic Russian Muslim Katya Novoselova stated. She has been living in Prague for more than 10 years, and has been wearing hijab for over eight years after embracing Islam.

When asked how they felt being Muslim in Czechia, Muslim women offer varied answers. Some Czech converts say they have been accepted by society. Some immigrants, like Turkish photographer Serap Sönmez, agree. When comparing Czechia with other European states, particularly France, she said:

I feel more free and safe here, and no one is judging – nobody asks why do I wear or not wear hijab.

But others said they've experienced verbal attacks, hate speech and feel uncomfortable. Local media reported incidents of Islamophobia on daily basis, such as hate speech towards women wearing headscarves and online attacks, including ones that went to court.

An example of such is the famous 2016 case of the Somalia student who wore hijab to class, and was pressured by the school's principal to take off her headscarf or face expulsion. The principal received support from Islamophobic movements and political parties, and was even awarded a medal in 2018 by the right-wing Czech president Zeman for being “a brave woman in the fight against intolerant ideology, for services to the state”.

The girl's case was dealt with through the court system. Initially, court of first and second instances decided to back the principal's position, emphasizing the Czech's stance as following the “western liberal ideals”. However, in 2020, the Supreme Court affirmed the Muslim student's right in donning the hijab, stating that the “prohibition of hijab was not following the legitimate aim”.

Despite the ruling not being final since the principal plans to appeal, people from Czechia's Muslim community consider it to be a positive development, not only in the clash between Islam and Islamophobes, but also within a democratic system at its best, with politicians versus judicial system.

Despite all this, the word Islamophobia cannot be fully used to describe Czechia, since such incidents remain isolated cases, rather than a systematic approach.

Moreover, sentiments of hostilities against Muslims in the country vary depending on political circumstances. Furthermore, local Muslims invest much effort in increasing public understanding of their community. They organize and participate in different events, open dialogues, write blogs and articles to educate people, as well as invite them to the celebrations of Islam holidays home or to the mosque. 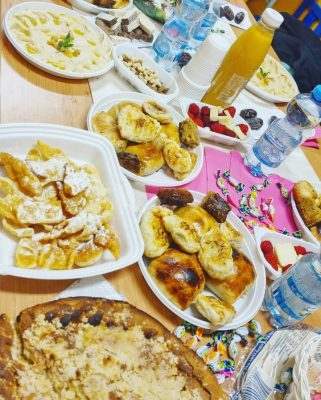 Throughout the month of Ramadan, women of different ages, social class, and origins come to the mosque at the time of iftar – or sunset, which is the time Muslims break their daily fast – and sit together at the same table.

Some of them come to the mosque every day, while others choose not to. During daytime, they go about with their normal daily lives, studying or working, then come to the mosque for late night prayers. Others spend the whole day at the mosque, studying in the small classroom, or reading Muslim's holy book, the Quran.

Zulfira, a Tatar girl from Moldova who has been living in Prague for over 4 years, explained:

This year, I went to the mosque for Iftar almost every day, 3-4 times a week. This gives me strength and patience in fasting, because not eating or drinking all day is not easy. And you need somehow to motivate and encourage yourself. People here are very nice: they fast too, and observe, which is very inspiring.

Celebrating Eid Al-Fitr starts for many women days in advance as they buy gifts and prepare for the occasion. The night before Eid is usually spent in cooking.

On the day, the imam who leads the prayers begin the recitals at 8.00 am on the first floor, and his voice is heard through the loudspeakers all over the second floor, where female worshippers pray in rows. In comparison with many other places like the Balkans or Russia, where males attend prayers and females mostly stay at home, in Czech mosque, families come together: husband, wife and children who wish to participate.

Later, community members exchange greetings and gifts, as well as meals and recipes. The dishes served mirror the diversity among Muslim women here. Alongside Arabic and Turkish cuisines, Czech convert Šárka prepared Czech pancakes, while Katya, a Russian convert, made traditional Russian salads and cakes, as well as other national meals from all around the world.

If Eid meals vary worldwide, Eid rituals across the global Muslim community are quite similar. After prayers, family and friends come together. Photographer Sönmez shared her memories:

In Turkey, children receive many sweets, especially “baklava” or “kadaif”. Relatives and neighbors come, and we exchange the gifts. Younger generations visit the elderly people.

Jacquiline, a women of mixed Czech and Sudanese origin who celebrates Ramadan in both countries, usually bakes cookies called “Ka’ak”,

In Czechia, not much time is spent in preparing food compared to Sudan. So women in Czechia spend more time in worshiping Allah.”

When asked how she feels being Muslim in Czechia, Jacquiline said:

“I wear hijab and I'm satisfied. Although sometimes there is some criticism, it can be withstood”.

Mindful of the effects of the pandemic, and of the conflicts in Gaza, Syria, Yemen, Afghanistan, as well as the school shooting in Tatarstan, and the suffering of Uyghur community, Muslims’ celebration of Ramadan 2021 was impacted. While the most favorite message of the holiday month is sharing joy with family and friends, the celebration of the end of the month focused on faith, humility and renunciation. In this sense, the spirit of Ramadan along with the philosophy of Islam teaches patience.

As Kamila, a Czech Muslim, puts it:

“Islam actually shows the true nature of a person”.