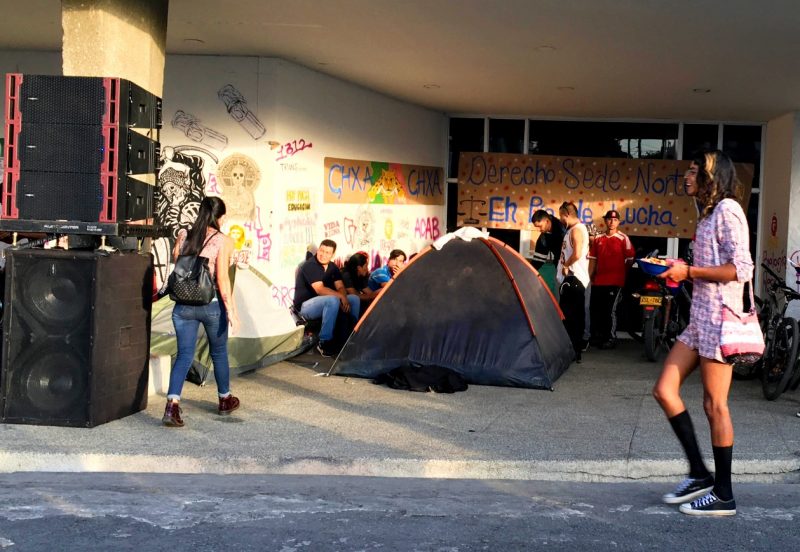 The student camp in Popayán, Colombia. Photo taken by the author.

In the southwest of Colombia, in Popayán, the capital of the Cauca province, students have set up a humanitarian camp near the public hospital in May as a grassroots response to the repression against protesters in a national strike that began April 28. Large makeshift signs made of cloth welcome visitors, while Colombia’s national strike marks one month of anti-government protests.

Sofía Preciado, one of the camp's members, told Global Voices that the camp was born out of necessity due to repression by the police and special forces for riot control (ESMAD, in its acronym in Spanish). She said injured people did not have a safe place to stay and could not return home due to injuries and the risks of being hurt again at night during the strike. A health brigade nurses them and refers them to the hospital when needed.

Since protests began in April, protestors have been violently confronted by police forces. More than 60 people have been killed. In Popayán, Sebastián Quintero Múnera was reportedly killed by a stun bomb thrown by ESMAD.

Preciado studies history at Cauca University. But at the camp, she is a member of the logistics committee. Other students take care of cooking, security, cleaning, and nursing to guarantee the proper functioning of the camp, while their university remains closed because they are on strike.

The camp is full of tents. Signs on the walls are allusive to the strike and national resistance. A few dogs run around while students make breakfast and lunch in the olla comunitaria (soup kitchen). The food is made of donations and shared with neighbors. 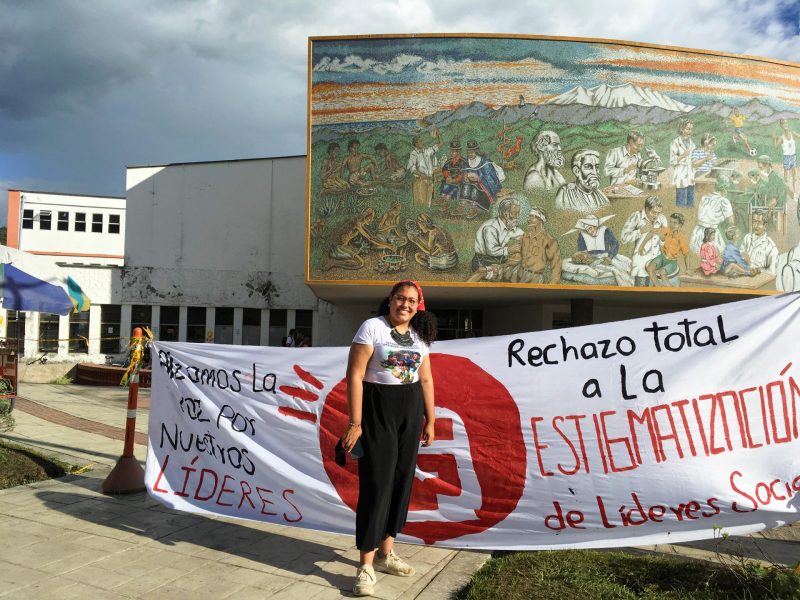 Sarah Klinger, member of the camp. The sign reads: “We raise our voices for our LEADERS. We rebuke the STIGMATIZATION of social leaders.” Photo taken by the author.

The camp initially catered to student demonstrators, but later diverse social groups joined the space. Johny Obando, another student and member of this camp, explained to Global Voices that:

One of these people is Bremmen Hinestroza, an artist who joined several protests including the national strike in Popayán. Hinestroza speaks on behalf of the homeless, Sinai Eco-neighborhood (an area with recycling process and a community orchard), and a local school for peace where they engage with people around social issues.

He believes that art is critical for the demonstrations:

Art plays an important role because it protects the life of those who are stigmatized. It sends a message that we are not vandals, we are organized demanding our rights. It is a peaceful way to protest and a useful channel for pedagogy.

The camp is near a traffic light where they speak to people in cars stopped in traffic. Jesús Velasco, an engineer student, explains:

We explain to people that we continue to strike against the labor reform, the militarization of certain areas in the country and in favor of public education, among other reasons.

Students sleep there and wake up at 6 a.m. every day to organize activities such as assemblies, theater plays, concerts, dance shows, and film projections. People bring donations and, especially, messages of gratitude for their restless effort. Their neighbors wrote “heroes” on hand-made posters for them.

On May 22, students demonstrated against the government by chanting in favor of the strike and the need to pursue further changes. They marched a few blocks from the camp.

A history of student repression

Despite the general acceptance from the community, there are still security issues such as people taking pictures and watching them from outside. Their safety concerns have historical roots within the student movement.

On June 8, 1929, law student Gonzalo Bravo Pérez was killed in Bogotá by police after leading a protest against the 1928 Bananeras Massacre, a slaughter of thousands of strikers for labor rights from the U.S. company United Fruit Company at the hands of state forces. Twenty-five years later, on June 8, 1954, student Uriel Gutiérrez and 11 of his classmates were killed by police forces led by the dictator Gustavo Rojas Pinilla while marching for university reforms. More than three decades later, six young communist students were murdered in Medellín on December 26, 1986 when armed assailants – who remain unknown – attacked the offices of the organization Colombian Communist Youth (JUCO for the Spanish acronym).

But violence is not an issue of the past. State repression is happening during the strike. In a joined press release on May 9, the NGOs Radio Temblor and the Institute for Development and Peace (Indepaz) expressed their concern about the repression against youth: “In Cali, 35 young people have been murdered, while there has not been a single homicide of members of the National Police.” They argue that police violence, usually justified on the basis of self-defense, is therefore excessive.

The number of murders, sexual assaults, injuries, and disappearances grow. Radio Temblor and Indepaz reported 61 civilian deaths, 46 eye injuries, and 22 sexual aggressions, and the death of two police members as of May 28. The Inter-American Commission of Human Rights (IACHR) condemned the excessive force used by armed forces in Colombia.

But no matter the risk of organizing and leading a social movement, young people and students are committed to Colombian society. Sarah Klinger, a 24-years old political science student and member of the Colombian Association of University Students, is one of them.

This is not her first strike. She actively participated in 2018, when students led another demonstration requesting an increase of the public budget for higher education during the administration of Iván Duque, whose administration had a disapproval rate of 76 percent.

Klinger belongs to a family that encourages engagement on social issues and they support her despite the risks. On May 12, she was detained by police for a few minutes; she claims that her role as a member of a human rights group that helps those injured or detained while demonstrating, helped her get released.

As I write, students are on the streets informing society about the strike through music, dance, arts, community assemblies, and printed pamphlets. After ten years of activism, Klinger reflects on her work:

We belong to the people and responded to the call for a massive mobilization. Thanks to our capacity to discuss politics within the university, we have an overwhelming task, and we should assume a leading role during the mobilization. Our call is to be united; we are willing to communicate the paths of unity. That's why we set up this camp.