As tourists party, citizens under COVID lockdown ask: Are there ‘two Jamaicas'?

'We suffer where you vacation' 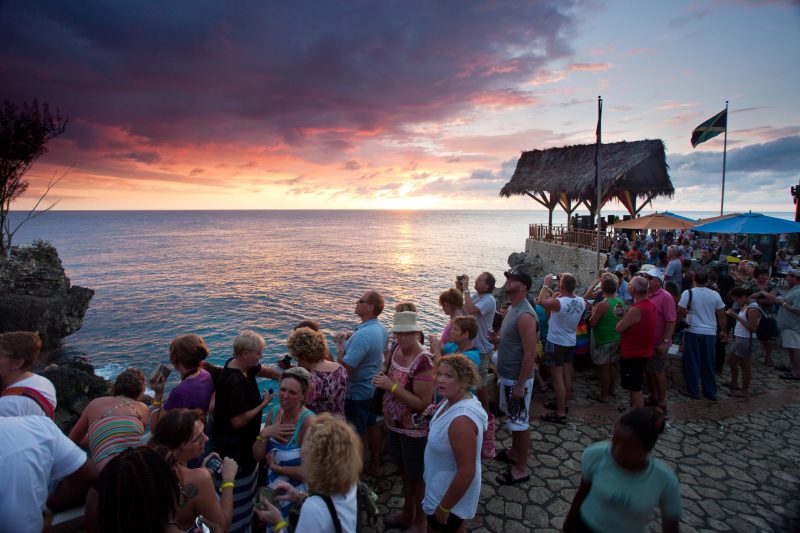 Tourists gathered at the popular Rick's Café on Negril's western cliffs in January 2011, well before the COVID-19 pandemic. Photo by Chris Ford on Flickr, CC BY-NC 2.0.

Having seemingly emerged from its second wave of COVID-19, the Jamaican government is making significant efforts to minimise the number of new cases and keep infection rates low. After warnings from health officials that the island would not be able to cope with a third wave, Prime Minister Andrew Holness recently announced more stringent protocols, including tighter curfews and limitations on gatherings. Yet, at least one in a week-long series of widely advertised, tourist-targeted parties was allowed to proceed, in blatant disregard of COVID-19 protocols.

When video of a Mocha Fest Jamaica event held at Rick’s Café—an establishment famed for its lively atmosphere and stunning clifftop sunset views—emerged on social media, the images of hundreds of maskless revelers partying in close quarters prompted a wave of anger across the local blogosphere.

Since the first case of COVID-19 arrived in March 2020, Jamaica has been suffering. Tourism is down, and the island’s normally vibrant entertainment sector has had to severely cut back. Major international music festivals like Reggae Sumfest have been curtailed by tight curfew hours, and Monday, May 24, the national Labour Day holiday, was designated a “no movement” day, with a curfew imposed from 2:00 p.m. on Sunday until 5:00 a.m. on Tuesday.

Meanwhile, Mocha Fest—which dubs itself “The Wildest Urban Festival on Earth”—was advertising an event comprising eight parties over five days, all taking place at different locations over the period May 24-31. The party at Rick's took place on May 27, prompting reactions such as this:

4 days ago I couldn’t leave my house…not to work on a Labour day project, grab brunch w/friends, pick up a few things at a supermarket or visit my grandmother. Full lockdown.. 14 mos of curfew, revenue loss, mental exhaustion & fear yet this was Negril today 3.5hrs away. Wow! pic.twitter.com/IkfB3lMIyA

In a radio interview, one aggrieved Jamaican promoter said:

If they have found a solution on the resilient corridor, whatever that solution is for the entertainment industry to reopen for tourists, why can't we find a solution for locals? It's just ironic and it's a slap in the face for citizens who are being arrested, who are being charged for partying, while if you're a tourist you can come on the island and be partying, and based on the videos I'm seeing, no social distancing, no mask wearing.

“Resilient corridors” refer to areas put in place by the tourism ministry to ensure safe movement by tourists along two stretches of coastline, including Negril.

Tourism officials were apparently aware of Mocha Fest.  After being cancelled in 2020 due to the pandemic, this year’s event was widely advertised on the festival’s website and social media pages, offering hotel packages and excursions and advising guests to book early. The event also appeared in the events section of the Jamaica Tourist Board’s “Visit Jamaica” website (the entire events page has since been removed), and promotional material for Mocha Fest bore the tourist board’s logo, as shown in this tweet from an overseas-based deejay who participated in the event:

Senior advisor and communications specialist at the Ministry of Tourism, Delano Seiveright, responded to a tweet regarding the removal of the advertisement from the JTB’s website, saying that no such endorsement had been given:

We are appalled! Full investigation…Calendar should have been updated a long time ago. Quite regrettable! JTB gave NO undertaking for sponsorship &/or endorsement of such activities since the start of pandemic. We have supported virtual events so far…More details soon!

There was a flurry of press releases as social media outrage grew louder. Rick's Café issued an apology and the Ministry of Local Government, which is responsible for adherence to COVID-19 protocols on the ground, announced that Rick's would be closed for seven days over breaches of the Disaster Risk Management Act.

One newspaper columnist suggested that Rick's Café is the least of the problem:

There are only two logical options here. Either Rick's Cafe is certifiably insane or felt it was protected. Either way Rick's isn't the problem because insane operators shouldn't have been licensed in the first place

The fake outrage.
Promise of investigations.
The hypocrisy is glaring.
Hundreds of people fly in, picked up by tour buses, taken to hotels and Rick's Cafe is FULL and Tourism officials pretend not to know about an event listed on its website? Spare us the BS about #MochaFest.

Even veteran dancehall deejay Beenie Man, who was recently hit with a substantial fine for breaching COVID protocols by advertising a party then publicly apologised for his lack of judgement, commented sourly:

I guess my apology was not good enough. I am not above the law, but some people are. #Jamaica #DoubleStandard

As various government agencies continued to engage in damage control, Prime Minister Andrew Holness commented on the concerns by referring to the “unequalness” [sic] of Jamaican society:

There is a particular situation which has come on our radar this morning […] that I have to pay careful attention to, because it throws up something that we are always contending with: the unequalness in our society, the haves and the have nots. Why is it that some people are allowed to party and others are not? […] This government has a duty to ensure that the law is equally applied, both to those who have not and those who have. […] Government will have to ensure that it was not complicit in any breach of its own law, and I have asked for a report […] if there is any breach, the full application of the law will be guaranteed.

Many Jamaicans agree on the inequality issue. One cited an oft-used proverb:

Jamaica has always been an island of double standards… See it everyday.

Donkey seh worl’ nuh level. That donkey knows di runnings and called it like it is.

“All animals are equal, but some are more equal than others.” #mochafest

Another suggested that Jamaicans are second-class citizens in their own country:

Jamaica is for tourists. How dare I stay here and tek up space

While citizens await promised investigations into how Mocha Fest managed to take place, the overwhelming sense among Jamaican netizens is that there are, indeed, two Jamaicas, something which former prime minister Edward Seaga referred to in a 2012 parliamentary sitting.

But in the time of COVID-19, the “haves” are the tourists, and ordinary Jamaicans are the “have nots”.