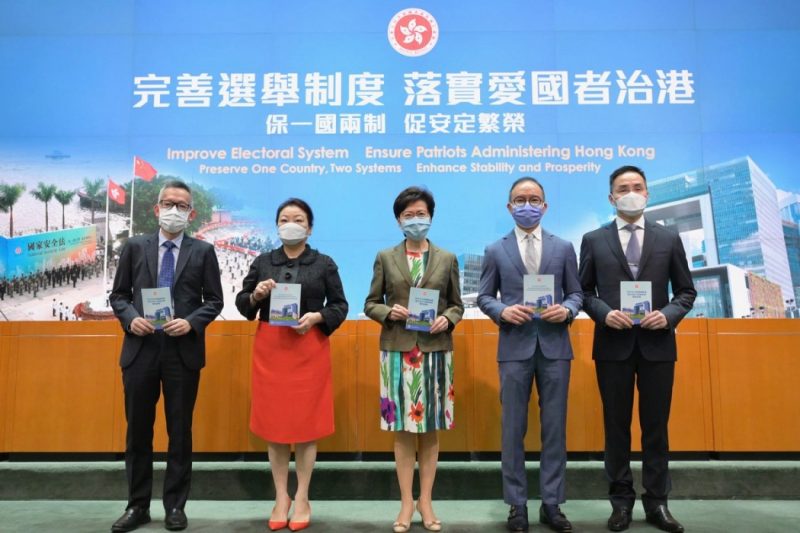 The following post was written by Kelly Ho and originally published on Hong Kong Free Press (HKFP) on May 28, 2021. An edited version is published here on under a content-sharing agreement.

On May 27, Hong Kong lawmakers overwhelmingly approved sweeping changes to the city’s elections – in a bid in a legislature with no effective opposition – that will ensure the power to govern the semi-autonomous region lies only in the hands of “patriots.”

The Beijing-led electoral shakeup has been hailed by government officials and pro-establishment figures as a way to shut out “anti-China” forces from the political structure. But democrats and some local election experts have criticised the revamp as a “major regression” in democracy.

1. A new Election Committee with a chief convenor

The new Election Committee – expanded from 1,200 members to 1,500 – will gain sweeping powers to nominate candidates to stand in Legislative Council (LegCo) elections and the right to appoint 40 to the legislature.

This is on top of its existing role of electing the city’s leader – the chief executive – in what critics describe as a “small circle” vote.

The high-powered committee will consist of representatives from the industrial, commercial and financial sectors, as well as people from 10 professions, including legal, accountancy, medical and health services and education.

It will also be packed with Beijing allies, including those from grassroots organisations and associations of Chinese fellow townsmen. Former chief secretary Henry Tang, who chairs the Federation of HK Jiangsu Community Organisations, said last month that groups like his were “very united” in doing work for the HKSAR and the country.

Tang cited the associations’ support for the police during the 2019 anti-extradition bill protests, and street booths they held to back the enactment of the national security law and the electoral overhaul.

Other new additions to the Election Committee that have strong mainland ties included representatives of associations of Hong Kong residents across the mainland border.

Under the approved election changes, the committee will establish a system of convenors and a committee member who is a “state leader” will become the chief convenor. It has been speculated that former chief executive Leung Chun-ying – a vice-chairman of China’s top political advisory body – may take up this role.

The 1,500 committee seats will either be ex-officio or will be returned by election and nomination.

Candidates wishing to vie for a seat on the Election Committee, the LegCo, or contend to become the chief executive are now subject to a multilayer vetting mechanism led by government officials.

The candidate eligibility review committee will replace returning officers in assessing and validating whether an election hopeful complies with the requirements of bearing allegiance to the HKSAR and vowing to uphold the Basic Law. They must also conform to the Beijing-enacted national security law.

Last July, a dozen pro-democracy figures including activist Joshua Wong were barred from running in the now-postponed 2020 LegCo election, after electoral officers said they did not have a “genuine and truthful intention” to pledge allegiance to the city.

The decision triggered the disqualification of four lawmakers in November and prompted 15 pan-democrats to resign from the legislature en masse in protest.

Members of the vetting committee will be appointed by the chief executive, but the detailed composition of the body is not known yet. The government said it will be chaired by a principal official and at least two senior officials will become members. The city’s leader will also appoint no more than three “non-official members” to the committee.

The Hong Kong government will be required to report the composition of the vetting committee to the Central government for record.

Before the candidate eligibility review committee gives the green light to would-be election candidates, they will first be scrutinised by officers from the police national security department. This means contenders – particularly democrats – will face higher risks, as they effectively launch themselves into a national security investigation.

Police findings will be passed onto the Committee for Safeguarding National Security, currently chaired by Chief Executive Carrie Lam. With the China Liaison Office director Luo Huining as the adviser, the committee on national security will call the shots on whether a candidate can fulfill the legal requirements for standing in any of the three elections.

For those deemed as non-compliant, the national security committee will “issue an opinion” to the vetting board, the government. The committee's decision cannot be challenged by judicial proceedings.

The revamped legislature will expand from 70 seats to 90, but the ratio of directly elected members will sink to a record low.

Only 20 spots will be returned by eligible voters in the redefined geographical constituencies, compared to 35 out of 70 previously. The Election Committee will choose 40 legislators, while the remaining 30 seats will be taken by candidates from the functional constituencies. They represent sectors that are “substantial and important to the development of the community,” such as financial services, labour, real estate and social welfare.

Hong Kong will see its five geographical constituencies for LegCo elections redrawn into ten areas. Hong Kong Island will be split into East and West, with the Outlying Islands being regrouped into the latter.

Kowloon will have three constituencies, while the New Territories will have five, with Yuen Long and Sha Tin being divided into two halves, respectively. Voters in each area will elect two legislators in a first-past-the-post system.

Local election expert Ma Ngok from the Chinese University of Hong Kong told HKFP that the new delineation was “strange and arbitrary.”

“The key is what democrats will still run, and who will be allowed to run. The constituency boundaries actually don’t matter that much,” the political analyst said.

The changes also mean the city will ditch the proportional representation electoral system and adopt a binomial system with two legislative seats per district. This method may help screen out extremist or radical candidates, Ma said, but it is seldom used in Western democracies.

Members of the embattled district councils – predominately controlled by the pro-democracy camp after a landslide victory in the 2019 election – will be ejected from the influential Election Committee in a bid to “depoliticise” the government advisory body.

In the past, more than 400 district councillors from 18 areas would vote among themselves to send 117 representatives to the committee responsible for choosing the city’s leader. But such power was stripped after the electoral overhaul, as top officials and pro-establishment figures slammed councils as being “extremely politicised” and accused them of “stirring conflicts” in society.

In a separate move to keep district councillors in line, the government imposed a new oath-taking requirement in mid-May to demand loyalty from these district representatives. Those who refuse to swear allegiance or breach the pledge will be barred from elections for five years.

Dozens of district councillors have quit over the past two months, some explicitly said they refused to take the oath, while others cited health and personal reasons. Some also stepped down after being detained for over two months pending a national security trial.

The electoral revamp introduced measures to ban behaviour that may “manipulate or sabotage elections.” It is now a criminal offence to incite voters to cast blank or invalid ballots or encourage them not to vote in an election.

The approved amendments also labelled attempts to “wilfully obstruct and prevent” other people from voting as a corrupt conduct.

The new offences were introduced “in view of the community’s grave concern about irresponsible conduct on the internet inciting others to prejudice the conduct of the 2019 [election],” the government said.