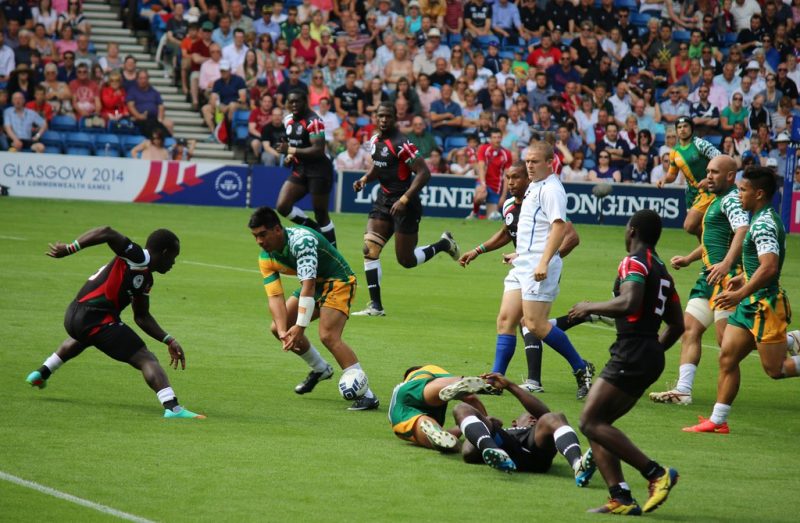 On May 21, Benjamin Ayimba, a former player and a manager of the Kenya Rugby 7s team, died, at age 44 years, after battling cerebral malaria.

Since late 2020, he had been in and out of hospital before being admitted to Kenyatta National Hospital in Nairobi, Kenya's biggest referral hospital. During the admission, the hospital bill spiralled out of control, forcing the family to seek financial assistance. This led to a rallying call from Kenyans of all walks of life, including President Uhuru Kenyatta, who donated KES 1 million (approximately $9,300) to Ayimba's family to cover expenses.

Ayimba made history by representing Kenya's male team at three Rugby World Cups. He was the first Kenyan and African outside of South Africa to win a World Rugby Sevens Series Cup title in 2016 at the Singapore Sevens.

Some of his notable career highlights include finishing third in the 2009 World Rugby Cup, after losing to Argentina in the semis based on points from previous games. In recognition of his efforts in building the game in Kenya, he was awarded the Order of the Grand Warrior (OGW) by the then Kenyan Head of State Mwai Kibaki in 2010.

The game of rugby has grown exponentially in the last 10 years with its shorter version, the 7s, being a major crowd puller through the World Rugby Series (formerly the International Rugby Board (IRB) circuit). The 7s rugby format made its debut at the Summer Olympics in 2016 held in Rio de Janeiro. Among the countries represented were Kenya's Rugby 7s team, with Ayimba as team manager.

Having played in the early 2000s till 2006, he built a formidable team that became a challenger to the traditional rugby-playing nations of Fiji, New Zealand and South Africa.

Rugby in Kenya has a huge following thanks to the exploits of the rugby 7s team better known as Shujaa (“hero”, in English). Their success in the mid-2000s and leading to the early 2010s has seen the country become one of the top teams coming from Africa in the 7s World Rugby Series.

Kenya’s men’s team Shujaa will be one of the three African teams playing in the upcoming Tokyo Olympics, together with their lady counterparts Kenya Lionesses. Part of the success of the teams enjoy is due to the foundations built by the late Ayimba. Rugby is the only team sport where Kenya has consistently excelled in the world, until now.

Playing Days and Transition to Management

His playing career started in the mid-1990s when he became captain of the Kenyan team Impala between 1999 and 2001. Then he moved to Nondescripts for three seasons and, in 2003, joined the English side Cornish Pirates, where he played for three seasons until 2005. His exploits in the shorter version, the 7s, is where he stood out.

He represented Kenya's 7s in the 1998, 2002, and 2006 Commonwealth Games and also formed the core of the team in the 2001 and 2005 World Rugby Cup 7s as team captain. It is his wealth of experience that informed his selection as player coach in 2006. At only 30 years old, his appointment made him the youngest coach at the International Rugby Board (IRB) circuit then. 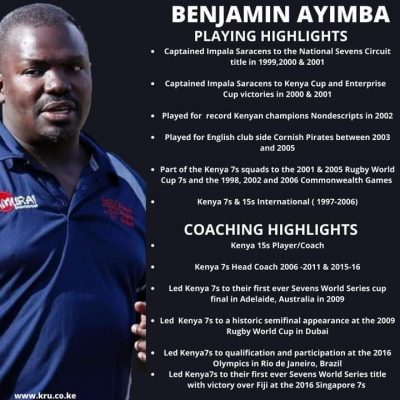 After leaving the national rugby 7s team management briefly in 2012, he back in 2015. His return marked the qualification and participation of the Kenya 7s national team in the Olympics held in Rio in 2016. In the same year, he managed the team through the group stages of the Singapore leg of the HSBC World Rugby Series, building up to the entertaining final, upsetting the formbook to beat more-fancied Fiji 30-7. At the end of the season, Ayimba left his management stint. At his time of departure, the rugby 7s game had grown, although now with mixed fortunes at the international stage.

Many commentators and fans are asking why that’s happening when the level of talent on the field remains as high as ever. In 2017, at the TEDxNairobi, Ayimba pitched for the rugby sport in Kenya and looked to encourage stakeholders from across the spectrum to change the game and bring the glory back to the rugby sevens team.

Upon the announcement of his death late on Friday 21st May, there has been an outpouring of heartfelt messages from the global Rugby and sports fraternity as well as Kenyans on social media platforms

“This is why we just love Sevens!”

RIP Benjamin Ayimba. Very sad to hear of Benja’s passing. One of Kenya’s most decorated coaches – their amazing 2015 Singapore Cup win will always be remembered by 7s fans around the world. He was a friend and a rival and I’m going to miss him and his smile. Rest Easy Benja.

This is hard. Rest in power Benja. ? Benjamin Ayimba has died at the Kenya Hospital after a battle with celebral Malaria ? pic.twitter.com/Lr8xp8S4li

Homeboyz Rugby team, where Ayimba was once a member of our technical staff, said:

It is with great sadness that we inform you of the passing of Benjamin Ayimba. Ayimba had been a member of our technical staff helping us win several 7s titles and the Enterprise Cup before moving to Harlequin. May God comfort and bring peace to all those in grief. #RipBenja pic.twitter.com/MRjg9gp4O4 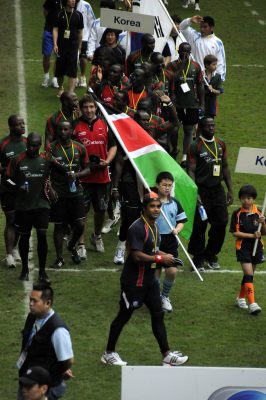 As a player, Ayimba captained local side Impala to two Kenya Cup league and Enterprise Cup doubles in 2000 & 2001.

As a coach, he guided the Kenya sevens team to their first and only World Series win in the 2016 Singapore final. pic.twitter.com/EEdii6VaLj

The world of rugby and indeed sports has lost one of its more authentic and outstanding personalities who embodied the will of the mind and put into practice his skills on the ground. His place in Kenya’s and indeed the world is firmly etched in the annals of sport.  Rest in Power, Benjamin!