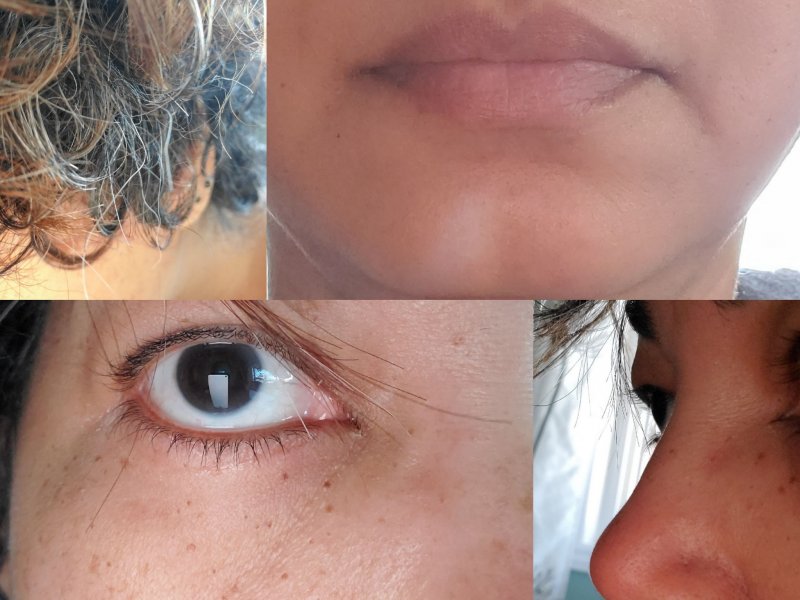 Of many races, accepted by none. Photo collage by Daniella Barsotti, used with permission.

When I look at my face, I see the plight of the indigenous Caribs [1] who, along with the other First Peoples [2] of the Caribbean, struggled against [3] European conquest and ravage. I see Africans violently plucked [4] from their home, brought to toil on stolen land in heat the white man couldn’t bear. I see my maternal grandfather sailing as a teen from China to the Caribbean [5] to escape communism, with no money and no knowledge of English. I see my paternal, Italian great-grandfather [6], who crafted many of the churches and courthouses still standing in the region today. When I look at my face, I see hardworking people coming together to create a new life and home for themselves, sacrificing everything for the generations that followed.

I see my history: the love, joy, pain, sadness, loss, and sacrifice it took to create this lineage. It set the tone for my adult life as a mixed-race Caribbean woman living in North America, where I am reminded—almost daily—why we can’t live as one world, one people. The racism I have faced from white people has been hurtful, but when you are mixed like me, the pain is deeper and more disappointing coming from other minorities because you don’t expect it. It is this discrimination that casts mixed folks like me onto Nowhere Island, where you're part of every race yet accepted by none.

On my first day of university in upstate New York, someone asked, “What are you, anyway?” I responded, “I’m human…you?” The retort didn’t embarrass as intended, only encouraged more insensitive questions. “No, I mean, like…are you white or Black or Latina?” “Yes, and more,” was my terse reply. I saw no reason to choose to be something I am not, so it was concluded by both Black and white students that I was an “Oreo.”

Is it my responsibility to explain why I look the way I do? Growing up in the Caribbean, I learned about the world in geography, history and social studies classes, yet many North Americans are ethnocentric. While I am fine with inquisitiveness, I am better with polite curiosity about where I am from and what it was like to live there. Why should I have to teach geography or anthropology to random strangers? I was raised to embrace the culture, cuisine and traditions passed down by my multiethnic ancestors, but in North America, you must be one race or another, so that it is easier for people to know which box to put you in.

The box I check is “Other.” They might as well call it “Nowhere” or “Nothing,” because that’s how it makes you feel—but it isn’t my job to make anything easier for anyone. I am the immigrant, trying to embrace a new culture and adapt to a new way of life, and for anyone thinking that I should have gone back to where I came from, I would have if I could.

I feel the sting when the racism hurled at me comes from other minorities. I replay the insults like movie scenes in my head: the two Latino guys in a Miami club who decided it was okay to call me coño [7] when they realised by my schoolgirl Spanish that I wasn’t one of them; my Black American classmates ending our friendship when I didn’t want to pledge a Black sorority, even when I told them I wasn’t interested in pledging any sorority; the Asian woman at my teller’s counter growing furious, when, at her request, I explained that my jade jewellery was my connection to my maternal grandfather. I remember her calling me “hak gwai”—tantamount to the N-word in Cantonese—under her breath, and her consequent embarrassment when I told her what she’d said gave me the right to not serve her. As far as she was concerned, I was too dark-skinned to don articles of my Chinese heritage.

I look at my face and shake my head at the North American East Indians I've met who seem uncomfortable that I know as much as I do about their festivals, culture and cuisine. They tell me that East Indian culture in the Caribbean isn't as rich or pure as “true” East Indian culture. When I look at my face, I chuckle at North American Italians’ disbelief that my surname is mine and not my husband’s, simply because I don’t look like them. I look at my face and know that some of the teasing and bullying my children have endured was on account of their calling me Mom, my mixed-race skin tainting their presumed whiteness.

Even in a time when we stand up and fight for our right to matter, I have women of colour judgementally commenting, “She upgrade!” when I pass by with my husband and children. Is that how little some women of colour regard men of colour? Regard themselves? You can’t help who you love; as far as I’m concerned, attractive men come in every colour. I married a man who loves me and our sons and treats us with dignity and respect. He is ever-present and supportive, embracing my culture and everything that makes me, me.

I recently heard about a group for Caribbean parents of children with autism. They were on a membership drive to attract people who spoke the dialect and applied the tools of our Caribbean culture to enhance the upbringing of our children. My first son has autism, so I reached out on social media and within 24 hours, was both accepted and rejected by the group. As it turns out, one member trolled me on Facebook, saw the profile photo of my family, and decided we weren't Black enough. I regard myself as having a nationality rather than an ethnicity, so when I saw them on television, the first thing that struck me wasn't that they were Black, but rather, fellow West Indians who had that Caribbean twang, just like me, from a region that is a melting pot of ethnicities.

I was stunned. For 10 years, I ran a charity [8] for people with autism, which continues to offer financial help and other support to the many families affected by the condition. No one is turned away. With 21 years of raising my son under my belt, I could have been an asset to the group, and would have also benefitted from their experiences, but apparently, my outer packaging was more important than what I could have brought to the table. One of the group's organisers even suggested I should try and join a South East Asian group, or start my own. I look at my face and realise that so many who stand up against racial profiling have no problem profiling a mixed person like me.

Fortunately, in our family, the colour we see is love.

Daniella Barsotti is a member of the Trinidad and Tobago diaspora. She currently lives in Ontario, Canada with her husband and business partner, and two sons. She blogs at IsleChile [9], where a version of this piece was first published, and on Medium [10].