The grounding of a civilian flight by Belarus is unprecedented 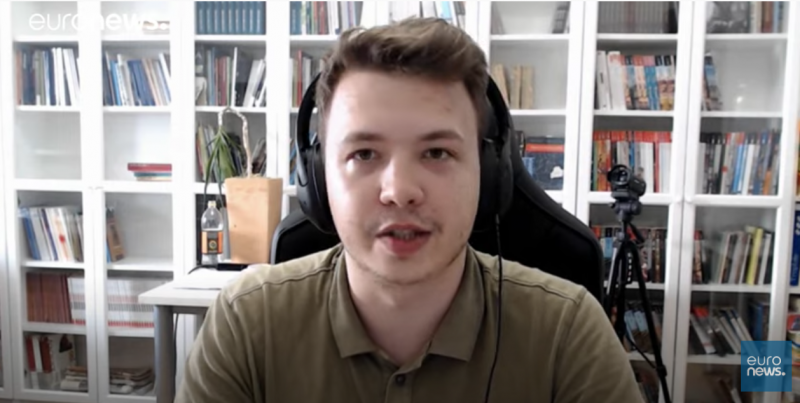 A civilian flight from Athens to Vilnius was forced to make an unplanned landing in Minsk, Belarus on May 23 after an allegedly false bomb threat on board. Upon landing, Belarusian authorities detained Raman Pratasevich, an independent journalist wanted by the Lukashenka government on extremist charges.

Pratasevich is a former administrator of the Telegram channel NEXTA-Live, which has been covering the anti-government protests in Belarus. He recently became the editor-in-chief of Belarus Golovnogo Mozga (Belarus of the Brain), another Telegram-based independent media outlet.

Our editor-in-chief, Roman Protasevich, has been detained in Minsk airport

A Ryanair airplane heading from Athens to Vilnuis has landed in Minsk's National airport. The airplane sent out a distress signal and changed course unexpectedly.

As reported by the Media Solidarity Belarus campaign on Twitter, the FR4978 flight was close to the Lithuanian border when it was diverted to land in Minsk. Belarus sent a Mig-29 fighter jet to intercept the civilian plane and force a local landing. On the ground, Belarusian border and law enforcement officials inspected the passengers’ luggage and IDs and subsequently detained Pratasevich.

While on the flight, the journalist had reportedly messaged his friends to indicate he may have been shadowed by Belarusian state security. His whereabouts are currently unknown, though according to Euroradio, police have confirmed his arrest.

4. Before the flight Raman Pratasevich (ex @nexta_tv ) wrote to his friend someone showed suspicious interest in him at the registration in #Athens airport.
5. A Russian-speaking man presumably attempted making a pic of Pratasevich's passport, then left the queue abruptly. 2/

In November 2020, Belarusian authorities announced that Pratasevich, along with another NEXTA-Live administrator Stsyapan Putsila, were being investigated on charges of organising mass disorder, disrupting public order, and inciting social hatred. NEXTA-Live and the Belarus Golovnogo Mozga channel were both designated ‘extremist’ by Belarusian authorities. The latter channel's founder, Ihar Losik, has been in jail since June 2020 and recently ended a six-week hunger strike.

Both Pratasevich and Putsila had previously moved abroad fearing prosecution after other activists’ arrests.

Based on the charges against him, Pratasevich could face a lengthy jail term and, potentially, more severe consequences.

Former opposition presidential candidate Sviatlana Tsihanouskaya and Lithuanian President Gitanas Nausėda, along with other EU leaders, have both condemned the incident and Pratasevich's detention.

The regime forced the landing @Ryanair plane in Minsk to arrest journalist and activist Raman Pratasevich. He faces the death penalty in Belarus. We demand immediate release of Raman, @ICAO investigation, and sanctions against Belarus. pic.twitter.com/ondPBd0kU9

Unprecedented event! A civilian passenger plane flying to Vilnius was forcibly landed in #Minsk. Belarusian political activist & founder of @NEXTA_EN was on the plane. He is arrested. ?? regime is behind the abhorrent action. I demand to free Roman Protasevič urgently!

Though the grounding of a civilian flight by Belarus is unprecedented, Pratasevich's detention is only the latest episode in the ongoing crackdown against Belarusian independent media. According to the Belarusian Association of Journalists, 29 reporters are currently behind bars.

On May 21, Belarusian law enforcement raided the Minsk studio used by Belsat, a Polish-based TV station that has produced investigations critical of Lukashenka and his milieu. Six Belsat employees were detained. Earlier this year, two Belsat journalists, Daria Chultsova and Katsiaryna Andreyeva, were handed two-year prison sentences for reporting live from a Minsk protest rally.

#Belarus Happening right now. Security forces broke into @Belsat_TV studio, where a programme was recorded. People have been detained pic.twitter.com/Bt95x7ZcV4

Earlier this week, Belarusian authorities launched a probe of the country's largest independent online media outlet, Tut.by as part of an investigation into suspected tax evasion. A number of Tut.by journalists were detained, with police searching the homes of several of its editors. The Tut.by website was also blocked.

Belarusian revolution has always had woman's face – and the junta targets women the most. Among 11 detained https://t.co/Kd5AnBgylu employees – Volha Loika & Alena Talkachova, extremely brave, truthful, and strong-minded female journalists. They should be freed #fightlikeagirl pic.twitter.com/CF2hKWc9fz

Press freedom organisation Committee to Protect Journalists has condemned the pressure against the media outlet, while Amnesty International has called the blocking of the Tut.by website, which is read by over 40% of Belarusian internet users, a ‘full-scale assault on the right to freedom of expression and media freedom in Belarus’.

The Tut.by newsroom has launched a standalone website, freejournalists.info, to keep readers updated on the case against Tut.by.