Resistance, rebellion, and rage: Japan's opposition to the Tokyo Olympics

'No vaccine. No medicine. Are you asking us to fight with bamboo spears?' 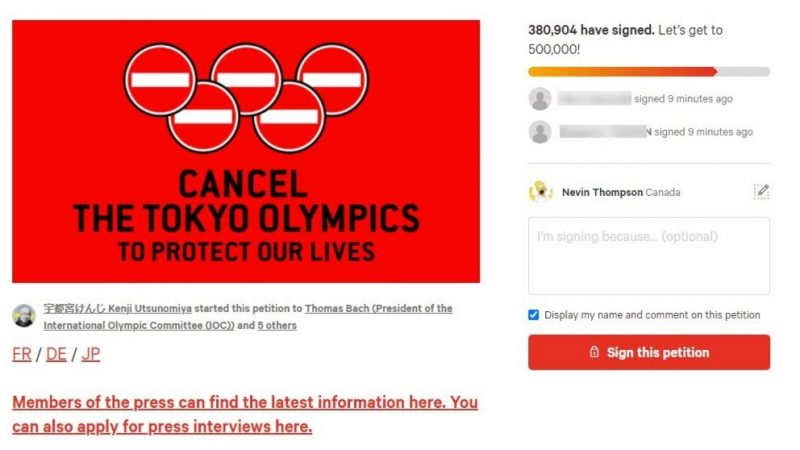 A change.org petition calling for the Olympics to be canceled registered about 50,000 signatures in 24 hours after it was launched in early May. Screencap from Change.org.

As Japan continues to struggle with a new wave of COVID-19 infections, opposition to the upcoming Tokyo Olympic and Paralympic Games, which will be held from July 23 to August 8, continues to build. Because of perceptions that the Olympic athletes are being prioritized over the safety of Japanese citizens, local authorities have begun to “rebel” against the Olympics, while a widely-shared meme compares Japanese authorities to the military government of World War II.

In a poll conducted on May 16, at least 80 per cent of Japanese people surveyed opposed holding the Olympics this summer (in the survey, 40 per cent said the Games should be postponed again), largely because of the threat posed by COVID-19. As of May 21, 2021, persistent rates of COVID-19 community transmission had forced much of Japan into a state of emergency, just 63 days before the start of the Tokyo Olympics.

Tokyo State of Emergency likely to be extended into June. Olympics are supposed to start in July? ? https://t.co/HJLdwn8fHX

As of May 21, 706,000 people in Japan had tested positive for COVID-19, with significant outbreaks in the Tokyo and Osaka regions during a “fourth wave” of rising infections this spring.

Despite the rising number of deaths and economic disruption throughout the pandemic, the Japanese government and the International Olympic Committee, the governing body of the Olympics, have insisted that the Tokyo Olympics will proceed this summer, after being postponed a year from summer 2020.

A main concern among the Japanese population, at least until late May, has been the relatively low rates of COVID-19 vaccinations in Japan. While the number of Japanese people who have received at least one dose of vaccine had quadrupled in just two weeks, from just 1 per cent of the population on May 5 to 4 per cent on May 20, and an ambitious stated goal of administering 1 million shots a day, there is a widespread public perception that Japanese citizens’ lives are less of a priority than the those of Olympic athletes.

For example, Nikkan Gendai, a tabloid that regularly breaks news critical of the government, reported there were criticisms that COVID-19 vaccines in Japan were prioritized for the “well-connected.”

And, as of May 19, less than 40 per cent of medical staff in Japan had been vaccinated, and the Tokyo Medical Practitioners’ Association joined the call for the Summer Olympics to be canceled.

After the Japanese government announced plans to remove nurses from the public health system and dispatch them to the Olympics, nurses protested on Twitter:

Twitter card text: “Nursing is not self-sacrifice. I oppose dispatching health workers to the Olympics.”

I'm joining the “Twitter Day of Action for Nurses” (#看護の日 ) on May 12th (Wed). I'm hearing concerns about government plans to recruit nurses for the Olympics, and I'd like to call for the Olympics to be canceled. It is instead the responsibility of politicians to end the COVID-19 crisis in Japan as soon as possible.

My vaccine reservation experience: Finally managed to login to the online reservation site. The earliest I could book is August 21st, and I nabbed it immediately. For reserving my second (follow-up) dose, I couldn't make a reservation: the site crapped out again. This is the reality of Prime Minister Suga's promise (about vaccines). He boasted that the inoculation of the elderly would be completed by the end of July. While 86% of local governments have said they would achieve the prime minister's stated goal, Setagaya Ward, which has a population of 930,000, cannot do so. So far, vaccinations in Japan have been a complete government failure.

Political foes of the government are not the only ones criticizing Japan's slow efforts to control COVID-19 while inviting tens of thousands of Olympic athletes and support staff into the country.

Only 1% of Japan is fully vaccinated against #COVID19. Moreover, the Japanese gov't is still trying to allocate medical resources to Olympic officials on a priority basis. Please sign the petition to #CancelTheOlympics #StopTokyoOlympic!https://t.co/E7uRsdidsT

Editor's note: The “1% vaccinated” figure was as of the launch of the petition in early May.

Other commentators likened the government's determination to hold the Tokyo Olympics in the face of a global pandemic to the military-dominated government Japanese government during World War II which mobilized the young and the old in preparation for a futile, suicidal battle against invading Americans.

In an old-timey prewar font, it reads, “No vaccine. No medicine. Are you asking us to fight with bamboo spears? At this rate, we'll all be killed by politics.” pic.twitter.com/RLXL7InP9E

A university researcher and “bookworm” (本の虫) noted the illustration used in Takarajimasha's parody is, indeed, real:

The photo used in the Takarajimasha newspaper ad comes from the “training with bamboo spears” illustration found in the chapter “Training to Use the Polearm” on page 62 of Yamanaka Hisashi's “Children and the Pacific War” (Iwanami Shinsho, 1941).

Adding to the aura of a rigid, incompetent war-era military government, after major news outlets exposed how it's possible to make vaccine bookings run by the military using a random number generator, Japan's defense minister, and his brother, former prime minister Abe Shinzo, instead complained that such “malicious behaviour” by journalism outlets would lead to wasted vaccines. The defense minister threatened to prosecute the media outlets.

Meanwhile, fearing a tidal wave of COVID-19 cases and dwindling resources to deal with them, local authorities have started to bow out of participating in the Olympics.

As at least 31 Tokyo Games host towns have abandoned plans to welcome overseas athletes, the governors of Chiba and Kanagawa prefecture, which neighbour Tokyo, have rejected a request by the Tokyo Olympics to secure hospitals designated for athletes. The governor of Ibaraki prefecture also rejected a request to secure beds for athletes, stating that, “We cannot prioritize athletes over our own citizens.”

The Olympic torch relay across Japan has also shrunk in scope. Earlier in 2021, a sexism scandal resulted in many celebrities and volunteers withdrawing from the relay. Now, the risk of COVID-19 and the unpopularity of the Games has resulted in dramatically pared-down ceremonies.

And the only thing that happened was a ceremony with a runner and the governor, because it's too dangerous to have spectators! https://t.co/SO9Gd2mIQj

In terms of silver linings for both the Tokyo Olympics and the pandemic, the Japanese government has released plans to dramatically increase COVID-19 testing.

On May 21, the government approved the Moderna and AstraZeneca vaccines as Japan aims to finish inoculating the country's 36 million people age 65 and over by the end of July.