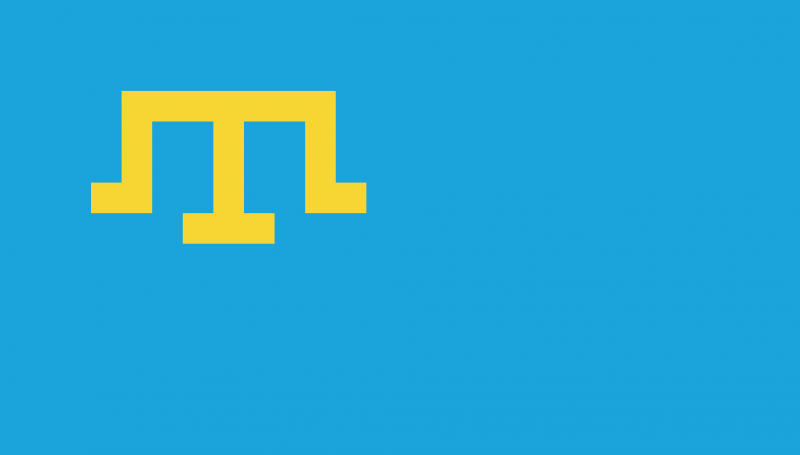 Flag of the Crimean Tatars. Image by Riwnodennyk, Public Domain.

On May 18, Ukrainians commemorated the memory of the victims of the Soviet deportation of Crimean Tatars. Engineered by Soviet leader Joseph Stalin in 1944, virtually the entire Crimean Tatar population was rounded up and exiled from their homeland in the Crimean peninsula in the south of Ukraine. In just three days in May 1944, between 180,000 and 200,000 people, adults and children, were expelled from their homes and put on crowded trains to be resettled in Central Asia and the Ural mountains. The official reason for the deportation was tied to false treason charges brought against the whole population by the Stalin regime.

Emine Dzheppar, First Deputy Minister of Foreign Affairs of Ukraine, who is herself Crimean Tatar, posted about the anniversary of the deportation on Twitter in Ukrainian, English and Qırım Tili (Crimean Tatar):

On May 18 1944, Stalin's regime started deportation of Crimea's indigenous people.
Just in 3 days no Crimean Tatar was left on the peninsula. Deportation was conducted in inhuman conditions-almost 50% died.
Memory eternal to the victims of the genocide of the #CrimeanTatarPeople pic.twitter.com/d2gzc5yZmo

77 years since the forceful and mass deportation of the Crimean Tatar people by the #USSR from their homeland. Almost half of the population died in exile as result of the crime of Soviet authorities.

In a few days on 18-20 May 1944 Stalin’s regime deported over 200k indigenous Crimean Tatars from @Crimea. 46% of them died in first years of exile. Today, we honor the memory of victims of this horrendous genocide?

The deportation (part of Stalin's population transfer policy) and subsequent repressions of Crimean Tatars by Soviet authorities resulted in the abandonment of 80,000 households and 360,000 acres of land. They also led to the deaths of many indigenous community members – some during the deportation, and many more in exile. Publications and education in the indigenous Crimean Tatar language (Qırım Tili) also faced restrictions: to this day the language is designated by UNESCO as under serious threat of extinction (severely endangered).

The long exile of the Crimean Tatars lasted 45 years: though Stalin's successor Nikita Khrushchev condemned the displacement, it wasn't until the Perestroika era in the late 1980s when 260,000 Crimean Tatars returned to Crimea.

The ban on their return was officially abolished on 14 November 1989, when the Supreme Council of Crimea declared that the deportation had been a crime. On 12 December 2015, the Ukrainian Parliament (Verkhovna Rada) issued a resolution recognizing the deportation as genocide and established 18 May as the “Day of Remembrance for the victims of the Crimean Tatar genocide”.

The trauma and memory of the deportation remain central to the history and identity of the Crimean Tatars, and have gained renewed attention since Russia's occupation of Crimea in 2014. The Russia-installed Crimean authorities banned the Crimean Tatars’ representative body, the Mejlis, and renewed the persecution of the indigenous community. Since then, over 10,000 people, most of them Crimean Tatars, have left the occupied peninsula.

In 2016, Ukraine participated in the Eurovision Song Contest with “1994”, a song about Soviet Moscow’s repressions against the Crimean Tatar community. Though the Ukrainian entry caused consternation among Russian lawmakers, Jamala, a Ukrainian Crimean Tatar artist, won the contest that year.  Speaking to Radio Free Liberty, Jamala confessed that she wanted to attract international attention to the events in Crimea. Without this publicity, she said, history might repeat itself.

In 2016, the Office of the United Nations High Commissioner for Human Rights issued a warning to the Russian authorities because they “intimidated, harassed and jailed Crimean Tatar representatives, often on dubious charges”. While the Kremlin and local officials present many of the arrests and detentions of Crimean Tatars as anti-extremist operations against Islamists, human rights defenders argue that the crackdown on local activists, journalists and lawyers is aimed at silencing critical voices.

In its recent report on the human rights situation in occupied Crimea, the U.S. Mission to OSCE noted that,

According to a recent report by the Crimean Human Rights Group, as of the end of April, there are more than 100 Crimeans held as political prisoners in Crimea or Russia, including 74 Crimean Tatars.

In a new episode of the documentary series “Nashi 30. Living History” (produced by Ukraine's public broadcasting service UA:PBC), devoted to the self-return of Crimean Tatars to their homeland, Ukrainian journalist Nataliya Gumenyuk interviewed members of the indigenous community. They recall their life in exile and reflect on the history of the displacement and the echoes of the decade-old trauma in modern events.

Today we remember the victims of the deportation of the Crimean Tatars in 1944. This is my documentary (Eng subtitle) in which we say about their return to Crimea, for which they fought. Despite being sad it's about strength&hope https://t.co/57mOY1J7Dd https://t.co/cZJr998OYH pic.twitter.com/HDQnMKgAwz

Watch the documentary in full below [in Ukrainian with English subtitles].