By spring 2021, the population had begun to question the restrictions 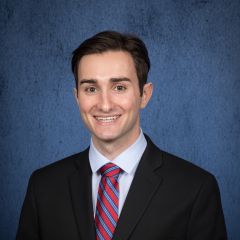 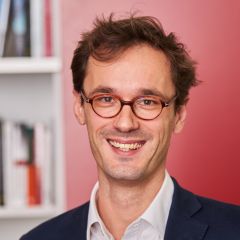 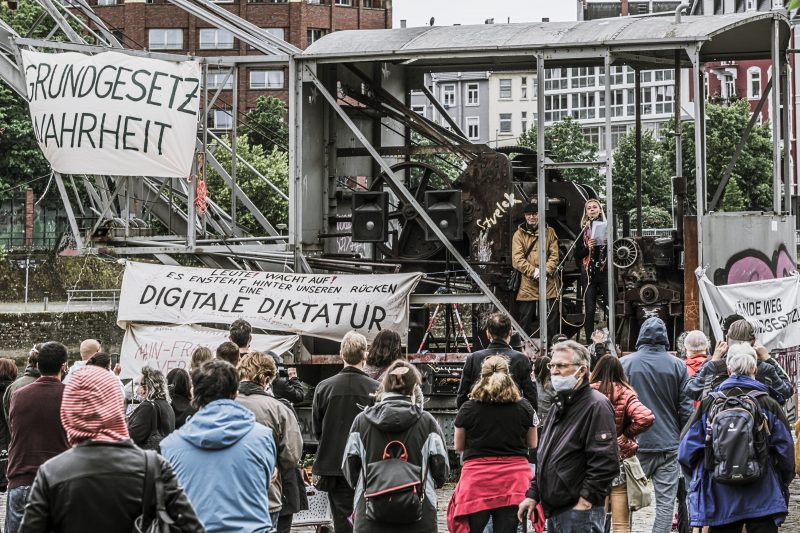 Germans exercising their right to free speech in a protest against COVID-19 measures in Frankfurt, June 7, 2020. Photo by photoheuristic.info via Wikipedia, CC BY 2.0.

In early 2020, Germans expressed significant support for Chancellor Angela Merkel’s response to the COVID-19 pandemic. A consensus initially emerged across supporters of most parties that the state was handling an extraordinary situation appropriately, with trust in the government rising to 80 per cent in April 2020. That consensus, however, had wavered by December 2020, as many Germans began to feel “Maskenmüde” (mask-tired) and frustrated by a rollout of a vaccine campaign characterized by shortages and lengthy bureaucratic procedures.

Adding to German citizens’ frustration was their shock at the “Maskenaffäre” (“face mask scandal”), revealed in March, in which two members of the conservative ruling party—Nikolas Löbel (of the CDU) and Georg Nüßlein (of its Bavarian branch CSU)—were found to have cashed in, to the tune of more than 910,000 euros in commissions (jointly) (almost 1.1 million U.S. dollars), through ordering personal protective equipment (PPE).

By spring 2021, a significant portion of the population had begun to question the restrictions imposed by the government to contain the spread of the virus. During several demonstrations, including one in March numbering 20,000 people in the town of Kassel, protesters claimed that freedom of speech had been sacrificed in the fight against the virus. Opinion polls speak to the polarization around the issue: around one-quarter of the population believes that the restrictions are going too far, although those who think they are not going far enough have also grown between January and April 2021.

Pointing to the closure of restaurants and hotels or the compulsory mask-wearing, those who are taking to the streets argue that their constitutional freedoms are being disproportionately restricted, and call for such measures to be put to an end. Meanwhile, members of the Bundestag (German parliament), particularly those from the liberal Free Democratic Party (FDP), demanded greater involvement in the political process, quoting a threat to democratic principles in the form of alleged executive over-reach. The FDP’s Marco Buschmann, in a letter to the chancellor’s office, asked for more parliamentary debate and warned that the restrictions of March 2021 would fail if politicians did not gain societal trust.

The definition of freedom of expression

The surge in such protests suggests a tension at play between different interpretations of free speech: one that emphasizes the individual's ability to say anything, regardless of the offense that it might cause, and another that focuses on equal opportunity among all citizens to participate in public debate.

Recent demonstrations suggest that the former understanding, the one that allows the individual complete freedom, is the one held by parts of the German population. Protesters see increased government action on the coronavirus as a violation of their individual right to control their own lives, based on their own opinions and judgments. Undoubtedly, a healthy democracy requires active citizens, who have the right to gather in public and express their opinions. Restrictions of these fundamental freedoms are serious interventions that can only be temporary if they are not to harm democracy.

Such attitudes were expressed by a fraction of those who took part in a January survey conducted by the Berlin-based Centre for East European and International Studies and included more than 2,000 respondents, aged 18-64, from all across Germany.

Views on Germany’s fight against COVID-19

When asked whether freedom of expression had been sacrificed in the fight against the pandemic, a sizable share of 11 per cent of respondents said this was entirely the case, while another 18 per cent thought it was somewhat the case. This minority tended to be individuals with lower levels of education, who, according to the survey data, were more likely to be unemployed, and who expressed lower levels of trust in state institutions and traditional media. 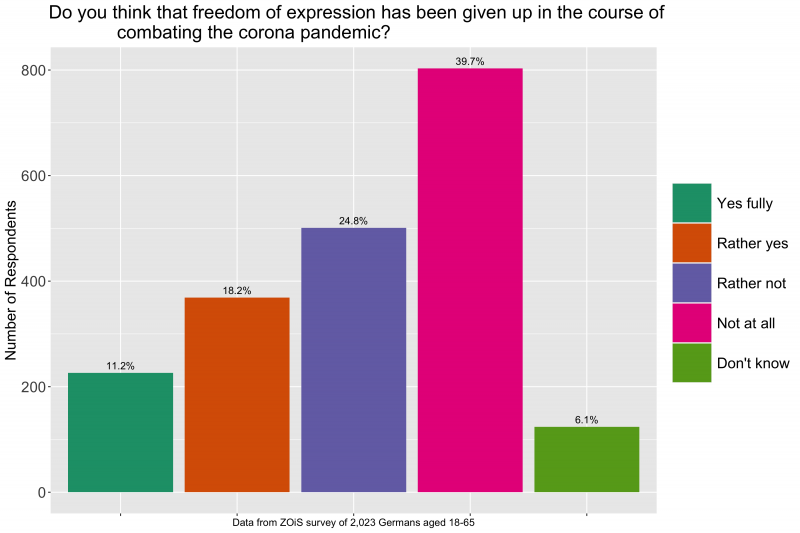 However, these respondents do tend to trust online media, which can reinforce or radicalize an individual's views as a result of the rise in misinformation and “echo chambers” that have accompanied the digitisation of media. Research has shown that, although trusting online news sources does not automatically imply less critical news consumption, people who feel disenfranchised from society, are often more susceptible to misinformation.

German views on freedom of expression in the context of the pandemic also reflect the country's ongoing East-West divide. According to the survey, those who live in the east of the country, in the former Eastern Bloc country of the German Democratic Republic, are significantly more likely to believe that freedom of expression has been given up, whereas those in the regions that formerly made up West Germany are significantly less likely to agree. There is no statistical difference for residents of the formerly divided city of Berlin.

Age also plays an interesting role in the question of freedom of expression during the pandemic. From age 18 to approximately 40, Germans are generally more likely to believe that their voices are being suppressed. Germans aged 40 to 65 are on average decreasingly likely to share that impression. This view was also particularly pronounced among male respondents.

When public health becomes the target of ideology

‘Freedom without a mask’ banner in German at a protest in Biberach an der Riss, October 25, 2020. Photo by Wald-Burger8 via Wikipedia, CC BY-SA 4.0.

Placing recent protests against COVID-19 restrictions in the context of “freedom’’ demonstrates the potential danger of invoking a term rich with implications: in times of crisis such as these, ideological fault lines can begin to crack and widen into gulfs.

French political scientist Jean-Yves Camus alluded to this tension when warning about the appeal of the extreme right across Europe for young people: “The far-right understood well that the younger generations … are attached to a freedom of expression and individual freedom that goes beyond the consensus that existed in the 1960s, 1970s, and which was based on the idea of a highly hierarchical society.”

It is undeniable that the population needs to be protected from COVID-19. But governments must be aware that restrictive policies can exacerbate existing social and political divisions, and require the support and trust of their citizens. Failing to recognize this could spell trouble for the health of the people, as well as democracy.

DISCLAIMER: Félix Krawatzek and Taylor Whitsell are members of the team that conducted the Centre for East European and International Studies survey. This is new data and more information will emerge as the team continues to analyse responses in the coming months.