The statement was not signed by the ruling Georgian Dream party 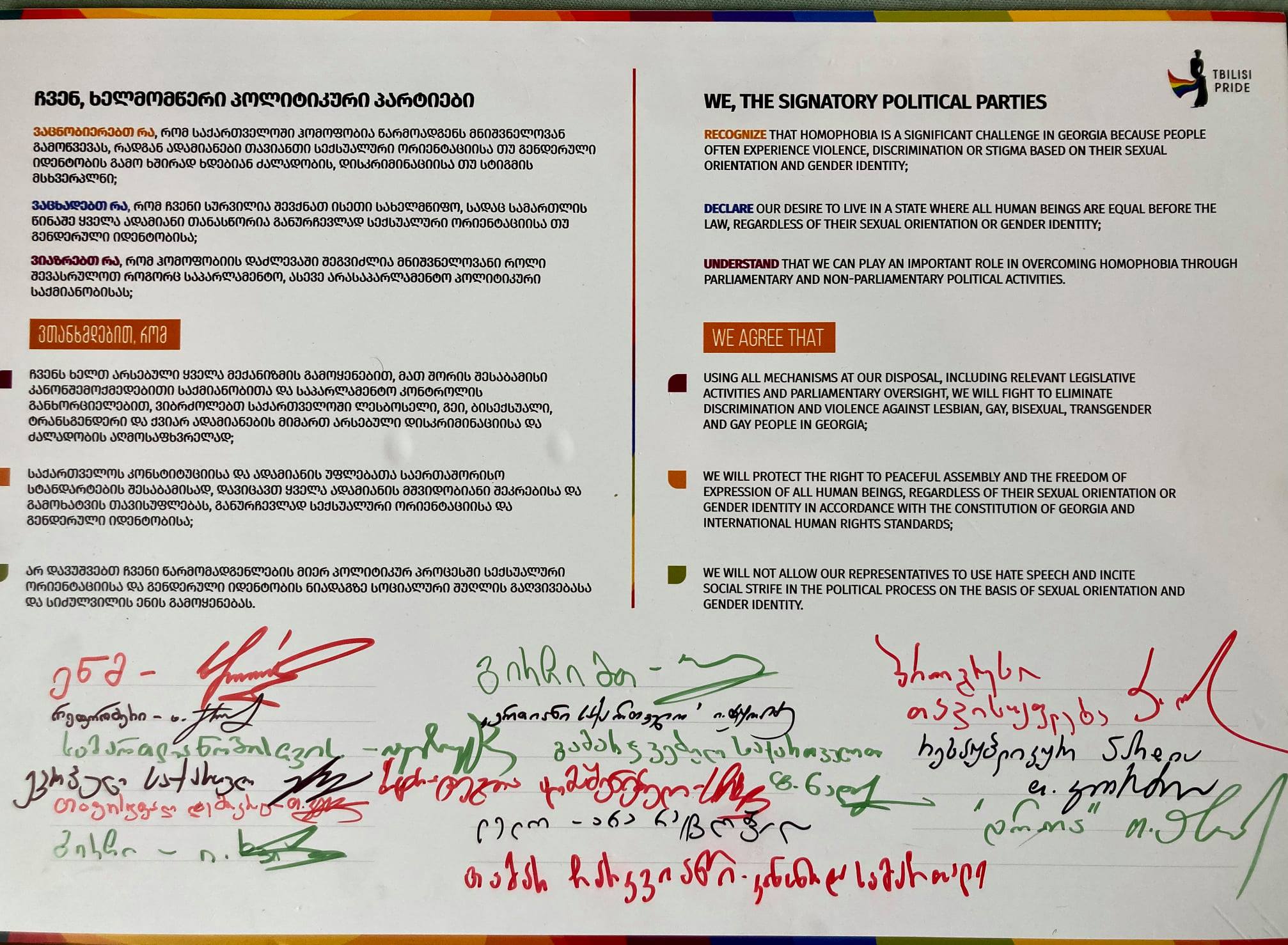 This story was first published on OC Media's website. A lightly edited version is republished here under a content-sharing agreement.

Fifteen political parties in Georgia have signed a statement outlining their commitment to protecting the rights of queer people.

The agreement, which was drawn up by Tbilisi Pride, was signed by most major opposition parties including the United National Movement (UNM), European Georgia, Lelo, Republican Party, Strategy Aghmashnabeli, and both Girchi parties. Aleko Elisashvili’s Citizens party, the Labour Party, as well as MPs from the European Socialists party, did not sign the document.

The statement was also not signed by the ruling Georgian Dream party.

The signatories agreed to use “all mechanisms at their disposal [to] fight to eliminate discrimination and violence against queer people.”

They also vowed to “protect the freedom of assembly and expression of every citizen, regardless of sexual orientation and gender identity.”

Attempts by queer rights activists to demonstrate for their rights in recent years have repeatedly been attacked by conservative counter-demonstrators. In 2019, Georgia’s first queer pride march could not go ahead as planned after the Interior Ministry announced that the police would not protect them.

The statement also said that signatories would “not allow the stirring up of social strife and the use of hate speech in the political process on the grounds of homophobia.”

Speaking to OC Media, the director of Tbilisi Pride, Giorgi Tabagari, said that the signing of the document was a turning point in Georgian politics.

“For the first time, political parties have taken an effective step towards protecting the rights of LGBT people. This agreement has no legal force and is symbolic, but it is a very important step,” Tabagari said.

Tabagari said that their group approached all political parties in Georgia and had been in communication with Georgian Dream about the statement for half a year.

“For six months we communicated with many leaders of the ruling party,” he said. “Unfortunately, representatives of Georgian Dream did not agree to sign this document, although they did not explicitly refuse,” he said.

“We hope that the Georgian Dream will change its position and sign this document,” Tabagari added.

A representative of Georgian Dream agreed to comment on why the party did not sign the document, after which they became unreachable by phone.

Despite repeated inquiries by OC Media, Georgian Dream refused to comment on why the party did not sign the document.