Old cinemas, malls, and houses have all been gradually disappearing from Kazakhstan's cities

The “dragon”, a mosaic by Vladimir Tverdokhlebov, was torn down during a remodeling in the center of Almaty. Photo by Anara Forrester-Tverdokhlebova, used with permission.

When an Almaty business owner razed the building of a traditional Thai restaurant to build a new establishment, the incident didn’t go unnoticed by Kazakhstan’s citizenry.

Built in the early 2000s in questionable taste, the restaurant’s façade was adorned with the mosaic of a fiery red dragon that became a landmark of Almaty’s city center. It neighbored the iconic Hotel Kazakhstan, for 30 years the tallest building in Central Asia, and was regarded as a symbol of stability in a rapidly changing urban landscape.

As soon as word spread that the building had been rented to Ruslan Abishev, the owner of the restaurant chain La Barca, local residents launched a petition for him to spare the dragon. Activists advocating for the preservation of public art threw their support behind it. Abishev initially promised the dragon would stay.

However, on April 17, residents woke up to photos of the mosaic shattered to the ground. “We wanted to dismantle the panels as carefully as possible, but, unfortunately, it did not go as smoothly as [planned],” Abishev told the local press.

That night, unknown activists spray-painted “Cancel La Barca” on the plastic around the scaffoldings of the construction site.

Anara Forrester, the daughter of the mosaic’s author, posted photos on Facebook of the destroyed dragon and received an outpour of support. “My 77-year-old mother was sending me pictures from the site where my father had gone to talk to the workers in charge of the demolition,” she told Global Voices in an interview. “A security guard, in the end, escorted my father away from the site.” 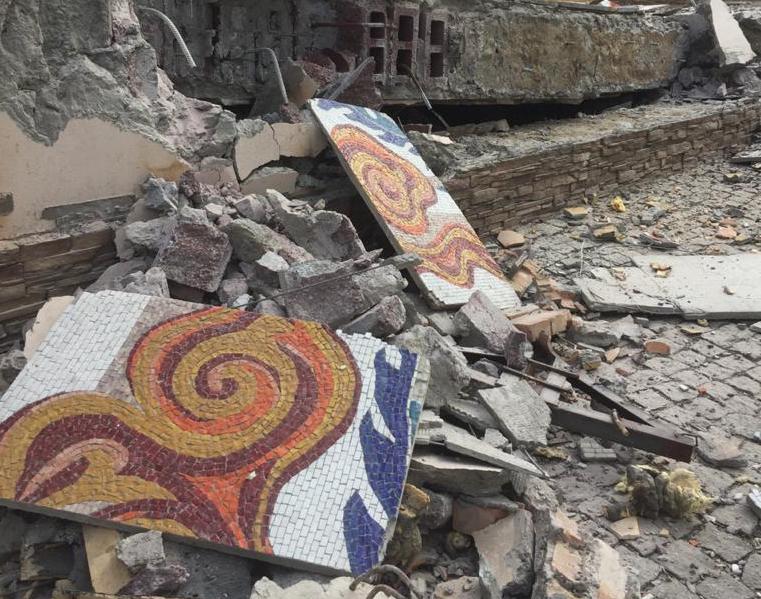 The “dragon” in rubbles. (Photo: Anara Forrester-Tverdokhlebova, used with permission).

Already in March, warned from her father, Forrester had posted an appeal on Facebook against the demolition of the mosaic. Since then, Forrester and her family received confusing messages from La Barca's management. “At first, one of their managers called my father to reassure him that they will work together to remove the mosaic without destroying it,” she said. “Yet later on his tone changed and said he did not have time for the procedure and arrogantly dismissed my father’s plea, saying ‘it’s just a dragon’.”

According to Forrester, her father approached the construction workers on the day of the demolition in an attempt to arrange an appropriate dismantling of the mosaic. Unmoved by the artist’s requests, the workers proceeded to take it down.

She added that the security at the construction site was beefed up to six guards already in the evening on the day of her post.

Management at La Barca has not replied to Global Voices’ requests for comment.

The artist behind it

The dragon mosaic’s author, 84-year-old Vladimir Tverdokhlebov, is one of Almaty’s most prolific monumental artists and mosaicists. Born in Russia, he was sent to Kazakhstan in the late 1960s to work on public commissions, mostly in Almaty, then called Alma-Ata.

In the 1970s and 1980s, he reached his creative peak, establishing the “Oner Art Combine”, working in connection with other masters of the various crafts involved in public art, says Dennis Keen, the founder of Monumental Almaty, a project dedicated to documenting and preserving Soviet public art. Keen also translated and subtitled the documentary “Monumental Art of Kazakhstan,” available on YouTube.

“Their ‘Oner Art Combine’ worked similarly to a factory. Tverdokhlebov would pull together the most professional work brigades, with talented designers and craftsmen,” Keen told Global Voices.

Monumental art under threat in Kazakhstan

Be it as an instrument of propaganda, a description of a building’s purpose, or just a pleasant composition adorning a bus stop, monumental art was a timeless feature of the cities of the Soviet Union.

But since after its demise in 1991, and amid a dire economic crisis and a diminishing interest in public spaces, Kazakh authorities have neglected these murals and buildings. Over the past years, old cinemas, malls, and houses have all been gradually disappearing.

In 2015, the Alatau Cinema, in central Almaty, was demolished to make space for Central Asia’s first McDonald’s store. The nostalgic public comments by the elderly, who lamented the demolition, were somewhat matched by the enthusiasm of the youth and families lining up along Tole Bi street on the fast-food branch’s opening day.

In December 2020, a 35-year-old mosaic in the southern city of Shymkent was earmarked for demolition, drawing outrage on social media. After it was demolished, city officials installed billboards in its place. When questioned by journalists and activists, officials said: “The mosaic on this building’s façade is not considered as holding historical and cultural value.” Uzakbay Koshkinbayev, the author, had died months earlier. Ironically, his mosaic read: “Preserve cultural monuments”.

The context of mixed emotions between nostalgia and modernity is what inspires “Take it down immediately!,” a survey of the most iconic buildings and monuments of Kazakhstan’s large cities. It regularly attracts thousands of votes.

In an interview with the independent news outlet Vlast.kz on the future of public art installations in Kazakhstan, Abdumatalip Akhmetov, chairman of the Shymkent Artist Union, said that “the fate of these mosaics depends on the owners of the territory,” as long as they are not listed on the government-approved list of “sites and objects of historical and cultural heritage,” which is enshrined in a regularly updated 2019 law.

In her interview with Global Voices, Forrester echoed Akhmetov.

The fact that people rushed to defend the mosaic has something to do with the artistic value of the dragon, but I think the anger is mostly directed to the lack of care for the urban environment, be it on the part of the private business that demolishes a mosaic or from the side of the government which has yet to regulate the fate of such public art.

While mosaics and facades are disappearing, the debate about the preservation of the urban landscape will continue in Kazakhstan.

According to Forrester, it would be beneficial to foster this discussion through a regulatory body that would take into account the interest of the community. “The dragon, much like several features of Almaty’s urban environment, was taken for granted. It was never regulated or protected from the whims of business owners or private citizens, as it would be, for example, in the West.”

Forrester also specified that “Already in March, warned from her father, Forrester had posted an appeal on Facebook against the demolition of the mosaic.”