Quo Vadis Aida? is gut-wrenching because we know what's going to happen 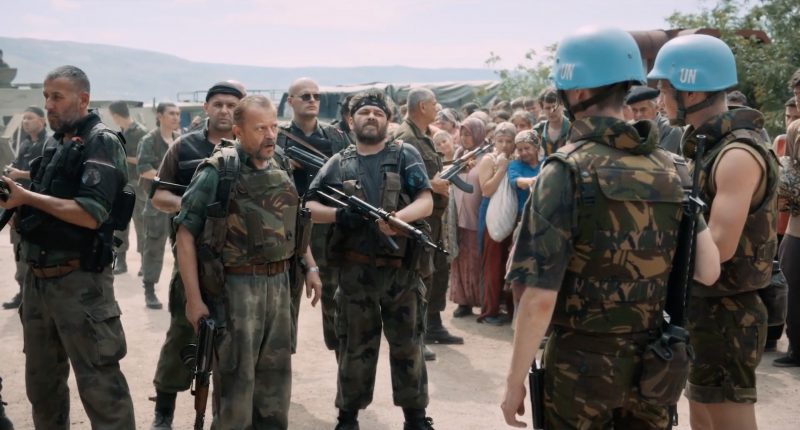 Screenshot from the film Quo Vadis, Aida? Photo from Wikipedia based on the clip posted at cineuropa.org by film director Jasmila Žbanić. Fair use.

Danish director Tomas Vinterberg's film Another Round won Best Foreign Language Film at this year's Academy Awards, but it was not the one most talked about online. Not in the Balkans, anyway. That honor goes to Bosnian director Jasmila Žbanić's 2020 film Quo Vadis, Aida?, a surprisingly sharp and unsentimental film about the 1995 genocide carried out by the Bosnian Serb Army of Republika Srpska in Srebrenica.

Considered a favorite by many critics, the movie ultimately lost out on the Oscar but it has clearly made an impact in Bosnia and Herzegovina, as well as regionally and internationally, LA Times’ Kenneth Turan, for example:

Starting to make my way through the foreign language Oscar shortlist and Bosnia's emotionally and morally shattering “Quo Vadis, Aida” blew me away. There may be other contenders as good, but none will be better.

Not surprisingly, the Serbian actors, Jasna Đuričić, who plays the titular Aida, and Boris Isaković (as convicted war criminal general Ratko Mladić) have both come under attack from extremists online for agreeing to take part in a film about a crime the vast majority of people in Serbia deny took place.

Serb extremists spammed various film sites like IMDB and Rotten Tomatoes with bad reviews in a smear campaign that mirrored their reaction to Angelina Jolie's 2012 debut film, In the Land of Blood and Honey. Jolie's film also dealt with the horrors of the Bosnian war, in particular, the rape camps run by Bosnian Serb forces where Bosniak and other non-Serb women, young girls, and also men and boys, were sexually and physically abused. In an interview with The Guardian, Jolie recalled that she and her cast had car windows smashed and were subjected to online smears, threats, hacked phone lines, and more.

This is part of a bigger problem, as the culture of denial is deeply rooted in Serbia and Republika Srpska. As former chief prosecutor of the UN International Criminal Tribunal for the former Yugoslavia, Serge Brammetz pointed out in an op-ed last year:

Leaders in the region have publicly denied the genocide, even calling Srebrenica a hoax and a lie. War criminals convicted by the ICTY are often hailed as heroes by prominent figures, while victims’ suffering is ignored, denied and disparaged.

Brammetz also pointed to the fact that a large number of suspected perpetrators of genocide—including political leaders and military commanders—have found a haven in Serbia.

That culture of denial also meant that Žbanić's film couldn't be shot in Srebrenica itself as the town's current mayor, Mladen Grujčić is a genocide denier. Most of the film was, therefore, shot in Mostar.

Žbanić had a similar experience filming For Those Who Can Tell No Tales in Višegrad in 2012. The film is based on the play Seven Kilometers North-East by Australian actress Kym Vercoe and her stay in Višegrad and the Vilina Vlas hotel and spa resort. Both Višegrad and Vilina Vlas have become notorious as sites of some of the worst atrocities during the Bosnian war, with Vilina Vlas being used as a detention and rape camp by the Bosnian Serb forces.

According to Žbanić and Vercoe, the film crew did not tell the people of the town what they were filming:

We were advised by some not to do that. One of our screenwriters, Zoran, had to pretend to be a Serbian director shooting a completely different film.

Quo Vadis Aida? is based in part on the book Under The UN Flag: The International Community and the Srebrenica Genocide by Hasan Nuhanović. As an employee of the UN and the Dutch Nuhanović survived the genocide while his brother, mother and father were not allowed by the Dutch to stay on the UN base. After the Bosnian Serb forces overran the base Hasan's family was taken away, never to be seen again.

Nuhanović and other survivors had criticized some of the decisions made by Žbanić, saying that the reality of Srebrenica was even worse than what was portrayed on the screen, including some scenes at the end of the film, They were also disappointed that the film didn't show a broader picture of the Bosnian genocide in the Drina Valley. Žbanić, on the other hand, defended her decisions by saying she had to leave out a great deal in order not to lose the audience's concentration.

I had deliberately avoided watching this movie for as long as I could despite the fact that I have spent the last two decades studying the Bosnian genocide, reading countless books, testimonies, trial verdicts, watching footage, and writing about the horrors of the genocide in three languages. I simply couldn't face up to it until last weekend when I sat down to watch it, which says something about the power of the medium.

Quo Vadis, Aida? is certainly Žbanić's best work, but it is incredibly difficult to watch. The film works so well because it focuses on the fear and hopes of those trapped at the UN Base in Potočari, fear because they know what the Republika Srpska army, police forces and paramilitaries had done before. Hopes because they saw the UN as the last refuge. For the viewer, it's gut-wrenching because we know what's going to happen.

The Dutch UN troops are correctly shown as mostly well intentioned but ultimately ineffective and unwilling to resist Mladić. As American journalist David Rohde pointed out, the Dutch soldiers could have done more, taken a firmer stand against Mladić's forces after Srebrenica fell, using other instances when the UN stepped in to protect civilians as an example. Instead, the Dutch stepped aside and allowed Mladić to overrun their base. Days after the fall of Srebrenica, footage appeared of the Dutch forces in Zagreb celebrating and relieved to have got out. This was taking place while people who sought shelter on their base in Potočari were being executed.

“Quo Vadis, Aida” is the most difficult film I've seen in many, many years. I had to stop various times. Above all, it is a film every Dutch ??person should see. Every. single. one. Because: it is not incidental what we did there. Or what we did not do. #Oscars2021 #Srebrenica pic.twitter.com/4dSC7xXqdi

One of the best documentaries I've seen on the genocide, the German Sky Above Srebrenica (Himmel über Srebrenica), details meticulously the lead up to the fall of the town, the airstrikes that were supposed to stop Mladić's forces but that never came and the ultimate surrender of the UN and the “international community” in Srebrenica and Bosnia and Herzegovina. The documentary ends with Mladić seeing off the Dutch with presents while the executions were underway.

For those who feel Jasmila Žbanić did not focus enough on the betrayal and the “international community,” I warmly recommend the above documentary. Still, what Žbanić does in her movie is extraordinary and it has rightly been recognized by critics and viewers around the world. Credit should be given where credit is due. By focusing on the fate of the victims, on family members being separated knowing they will never see one another again, and the plight of a mother desperately trying to save her family, her sons and husband from certain death, Žbanić shows what genocide looks like, what it means to lose everyone you love, to be uprooted from everything you know, to be left with only memories and sorrow.