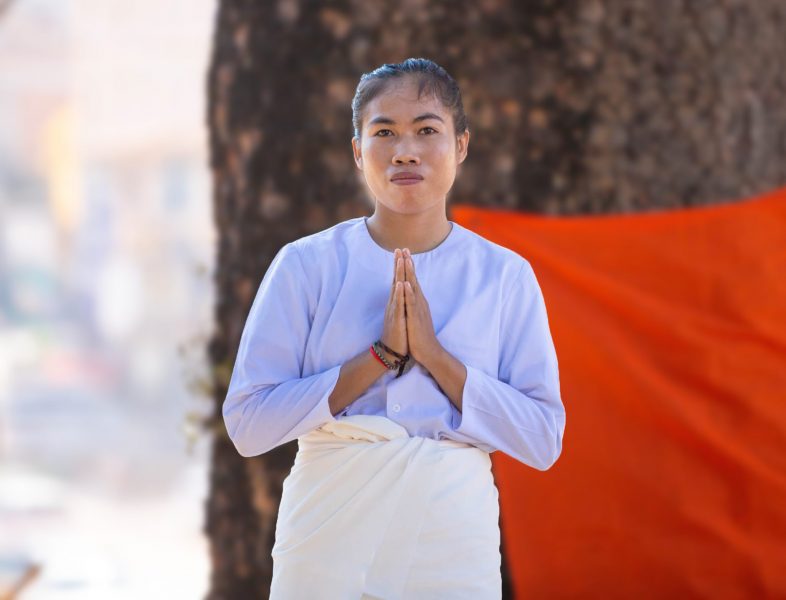 File photo of Mother Nature member Long Kunthea, one of the activists convicted on May 5. Long Kunthea was a central figure in a planned one-woman walk to the prime minister's residence in September 2020. Source: Facebook

Five members of the environmental group Mother Nature were convicted on May 5 in Cambodia on charges of “incitement to commit a felony or disturb social order.”

Phoun Keo Reaksmey, Thon Ratha, Long Kunthea, Chea Kunthin, and Alejandro Gonzalez-Davidson were sentenced to 18-20 months in prison and ordered to pay a fine of 4 million riels (US$1,000).

Phoun Keo Reaksmey, Thon Ratha and Long Kunthea, who were arrested in September 2020, were present in the court during the handing down of the verdict. Chea Kunthin is in hiding ,while Alejandro Gonzalez-Davidson, the Spanish national who founded the group, is barred from returning to Cambodia after being deported in 2015.

Mother Nature relies on social media campaigning to raise awareness of environmental issues. In 2015, the group successfully prevented the construction of a mega dam in the remote Areng Valley by highlighting its impact on farmers and rural villages. Since its founding, eight of its members have been arrested by the Cambodian authorities.

The three who were arrested in September were planning a one-woman walk to the prime minister’s residence as part of a campaign opposing the planned privatization and reclamation of Boeung Tamok lake, one of the last remaining lakes in Cambodia's capital city, Phnom Penh.

In recent years, real estate projects displacing lakeside residents have sparked intense conflicts in the city. Activists claim most of the projects were given to close associates of ruling party officials. They also warned of the harmful environment consequences of filling in natural lakes.

Alejandro Gonzalez-Davidson told Radio Free Asia that their group did not violate any law, as the arrest was done hours before the planned walk:

We decided to do a one-woman march: (Long Kunthea) walking for three kilometers all dressed in white, alone, and another woman, 19-year-old Phuong Keo Raksmey, she would be recording and live streaming, and then Thun Ratha, he would be basically in the conversation from his own home, live streaming it through social media. So that was our plan. And the idea was to walk towards the residence of the prime minister. A few hours before the march started, they arrested the three activists and confiscated pretty much everything that the organization owned — cameras, laptops etc.

During the trial, videos that had been uploaded to Mother Nature’s Facebook page were presented as evidence. The presiding judge reportedly stated that the campaigns initiated by the group could “create anger for the masses.” The judge also asserted that developing Boeung Tamok lake could ease traffic congestion in Phnom Penh.

After his conviction, Thon Ratha was heard shouting to court reporters:

This is very unjust. Sentencing people who just care about nature … they are very eager for trials.

The Khmer court is like this. Please tell people that we are still strong.

The court’s decision was criticized by human rights groups both inside and outside Cambodia, who linked it to broader attacks on freedom of expression over the past year. Naly Pilorge, director of Cambodian human rights group LICADHO, said:

These young people were arrested for trying to protect Phnom Penh’s largest lake and preserve it for current and future generations. These environmental defenders have suffered for too long and we call on authorities to release them from overcrowded prisons so they can reunite with their families and communities.

After the verdict, Mary Lawlor, the UN Special Rapporteur on the situation of human rights, posted this tweet:

I'm saddened to hear that three human rights defenders from Mother Nature #Cambodia were today convicted to between 18 and 20 months in prison.

I shouldn't have to say this: peacefully defending the environment is not a crime.

The Permanent Mission of the Kingdom of Cambodia to the UN Office in Geneva countered by issuing a press statement:

Crime is crime and it cannot be justified because it is in pursuit of other aspirations.

Days before the announcement of the verdict, Mother Nature asked the public to watch their campaign videos as proof of the innocence of the detained activists:

Watch it and decide by yourselves whether MNC [Mother Nature Cambodia] activists are indeed criminals who deserve to be in jail, or if you think they are merely young Cambodian patriots who want to protect the nation’s natural resources, and as such should be released immediately.

Mother Nature is planning to appeal the verdict.