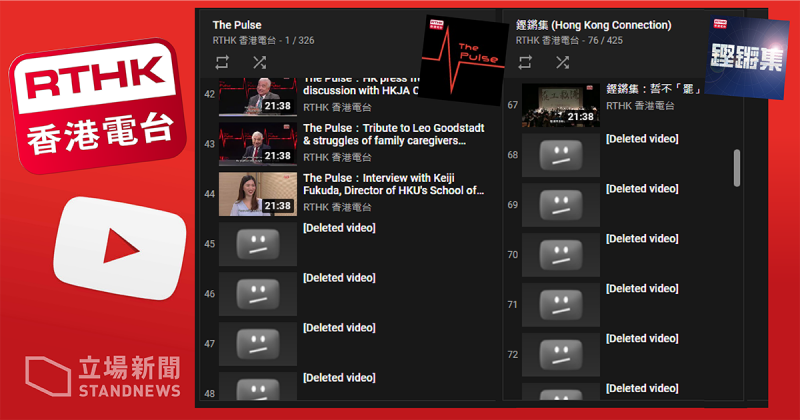 It's no secret that press freedom has been waning in Hong Kong since the enactment of the national security law in July 2020. Following the clampdown on Apple Daily newspaper — and the arrest of its pro-democracy owner, Jimmy Lai — the next news outlet on the line is the government-funded public broadcaster Radio Television Hong Kong (RTHK).

RTHK has been a primary target of Beijing since the handover of Hong Kong to China in 1997. The TV station has since then upheld its editorial independence and many of its programs are critical of the government, but pro-China politicians defend that the public broadcaster should play a leading role in promoting government policy. With strong public support, RTHK nevertheless survived the pressure so far.

Since the 2019 anti-extradition protests, however, that pressure has increased significantly — and it could be reaching breaking point soon.

In the past two years, RTHK produced a number of investigative pieces that were critical of the government authorities, such as the July 21 Yuen Long mob attack in 2019 which specifically scrutinized Hong Kong's police.

As the protests subsided in early 2020, Police Chief Chris Tang filed a complaint to the Communications Authority, the media regulator, accusing RTHK's of insulting the police force on the news satire program Headliner.

In May 2020, the regulator accepted Tang's complaint and demanded a review of RTHK's management. Strong-armed, the channel was forced to axe Headliner, a highly popular program first aired in 1989.

The management review report, released in February 2021, slammed RTHK for its “lack of coordination, oversight, and supervision at the corporate level which can give rise to considerable risk to RTHK’s corporate image, reputation, and interests.” As a result, on March 1, 2021, the government replaced Leung Ka-wing, the public broadcaster’s director and a veteran journalist, with Patrick Li, a government bureaucrat.

Censorship and punishment of staff

Soon after taking office, Li demanded to review all programs before airing. He also introduced a pay cut policy on employees as punishment whenever management decides to pull programs.

The new management came as far as to remove posts from RTHK's Facebook page and YouTube channel:

Removal of archival contents from RTHK YouTube channel has began. The struggle of man against power is the struggle of memory against forgetting. pic.twitter.com/WxS2UIgNnf

[1/3] #HongKong Chief Executive, Carrie Lam, has been hosting a daily talk show on public broadcaster #RTHK since 28th April. This parody of journalism enables her to promote unpopular policies without exposing herself to questions from journalists. https://t.co/hI6FMMbvXl

Since Patrick Li took over, at least six senior members of staff have resigned — while more government bureaucrats with no media experience were appointed to management positions.

Some members of staff were pressured into resigning, with three cases becoming particularly symbolic.

Paul Lee, the veteran producer leading the program Hong Kong Connection, resigned after the management rejected story ideas about the 2021 commemorations of the Tiananmen Square incident and the 2019 Yuen Long mob attack:

Nabela Qoser, a journalist who has been harassed by pro-Beijing protesters for her critical views, had her contract terminated by RTHK earlier in May:

Nabela Qoser, RTHK journalist who was forced to leave the station by the end of this month, is part of a team that won a merit @HRPressAwards. The winner, as we all know, is @Baochoy and team for the July 21 incident investigation, which got her into trouble with the govt. pic.twitter.com/mVOIyaX8Yk

Yvonne Tong, an outspoken journalist, resigned after months of harassment by pro-Beijing forces:

Hong Kong journalist Yvonne Tong, previously at @rthk_enews and conducted that viral interview where a senior @WHO official hang up on her over a question regarding #Taiwan, has reportedly resigned after being harassed by pro-#Beijing forces in #HK. https://t.co/2Lwi8FqGrA

There are still many journalists in RTHK fighting to keep the channel's professional standards. But judging from what has happened in the past two months, it seems that the public broadcaster will become an official government mouthpiece sooner rather than later.

Radio Television Hong Kong (RTHK), my former employer for 19 years, is now being brought to heel by the Hong Kong Government at China's behest. For decades the station's output on TV and radio has been high-quality broadcasting that enjoyed widespread public support and credibility. Now, at China's behest, the station is becoming a propaganda organ… What's the next step? Hard to say, but perhaps we might expect an internal reorganization under which the station's English-language services would no longer be placed on the same flow-chart level as Chinese-language services; a new RTHK board would be filled with carefully vetted appointees (not unlike the current one), and the Director of Broadcasting would report directly to the Information Services Department. In short, RTHK would formally become an official government mouthpiece.