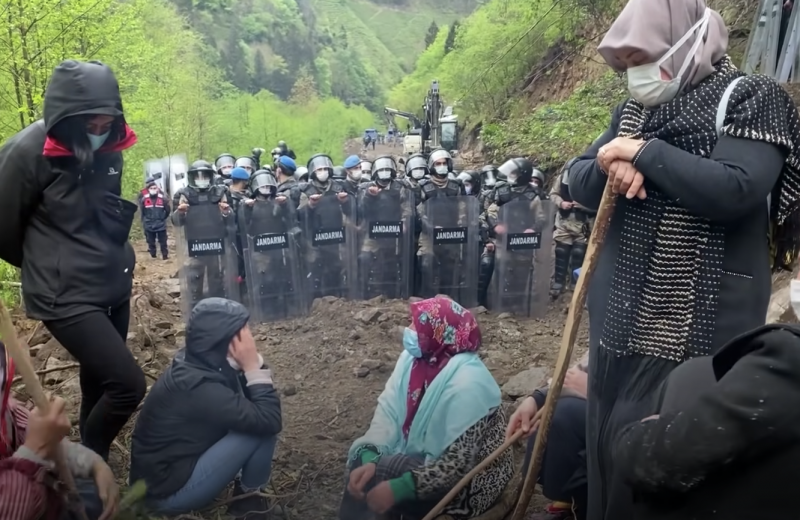 Screenshot from DW report on Ikizdere.

Known for its beautiful green valleys, tea cultivation, and beekeeping, Turkey's İşkencedere Valley, located in Rize province near the Black Sea, is facing its most serious environmental threat to date.

In March, a presidential decree stripped part of the valley of its protected area status, so that Cengiz Construction, a subsidiary of Cengiz Holding allegedly with close ties to the ruling Justice and Development Party, could carry on with its plans to build a stone quarry in the area.

Around 16 million tons of stones will be dug out to be used in the construction of a new port that Cengiz Construction is building in nearby Rize city. The company was granted a concession to mine the area in İşkencedere Valley for the next 75 years.

On April 21, construction began; and so did the resistance by İşkencedere's residents.

In an interview with BBC Turkish, the Federation of İkizdere Association, speaking on behalf of the three nearby villages of Şimşirli, Cevizli, and Gürdere, said that the use of dynamite and chemicals in the mine will contaminate the area's water supply.

The Federation also claims at least 32,000 trees will be cut because of the project. These include 50-year-old chestnut trees, essential in the production of chestnut honey for which the local communities are known. Speaking to Turkish Evrensel Daily, villager Musa Yilmaz said residents watched the felling of the first trees in tears.

Removing trees, along with the scrapping of 20 cm of vegetal soil — a necessary process in basalt mining — will increase the risk of floods and landslides in the region, according to Ordur Environment Association. In a statement issued in support of the local communities, Ordur also said that the dynamite blasts could damage nearby houses.

Residents claim that construction has already contaminated the nearby stream. Pervin Baş, one of the villagers, told Turkish media: “I have to protest against [the construction] since I cannot cook anything for my children if [it] proceeds. We do not have access to fresh water since all our water supply has stopped since they started construction.”

Local news platform Solcu shared images of the area before and after the construction:

İkizdere, before Cengiz and after Cengiz

The villagers are suing the Turkish state, in the hopes that a court could revert the presidential decision to strip the area of environmental protection, in a case pending at the Rize Administrative Court. In an interview with Sozcu newspaper, lawyer Yakup Okumuşoğlu, who is representing the villagers, said that they are expecting a ruling in favor of them.

This isn't the first time that İşkencedere's residents have organized in order to protect their environment from harmful infrastructure projects. In 2019, they sued contractor SR Tarım, which had been granted permission to start a similar mine in the valley. At the time, a judge ruled in favor of the community, and the mine was permanently canceled. The court stated at that time: “Construction and operation processes would inevitably and irreversibly damage the natural landscape.”

Cengiz construction has been involved in other controversial infrastructure projects, such as the new Istanbul Airport, the construction of which removed 13 million trees in the time span of seven years, according to Northern Forests Defense a local environmental advocacy movement. During the construction of the Ilisu dam in Mardin, in 2018, the 12,000-year-old town of Hasankeyf was submerged.

Since March, local residents have been protesting against the project with sit-ins and by rallying support on social media.

On April 24, the protests managed to force the company to halt the mine's construction. They celebrated their brief victory with a traditional folk dance called “horon”:

At the end of the day, Cengiz was forced to remove its construction equipment. The people of Ikizdere danced to horon.

Yes, we are at home. We can't go outside because of the pandemic, but they are not stopping. At least we can say something against Cengiz Holding's incentive to build a stone quarry in İkizdere. They destroyed the Black Sea with hydroelectric power plants. They ended the water supply there. Now they are after stone and soil!

In their attempt to stop the construction, community members even put their beehives in front of excavators.

Cevizlik stone quarry! Bees have also come to protect their living spaces! The last fight of the middle earth!

On April 25, the police barricaded the construction site, but residents still managed to reach the area through forest paths. Tear gas was deployed against the protesters, and 15 were arrested (eight have been released since).

They are walking through the forests. [The police] blocked the roads, handing out fines on anyone they see on the streets.

Attack on the people in İkizdere.

In İkizdere, our people are teargassed so that the contractor's machine can kill nature. Shame on those who make this to our aunty Firdevs.

On May 5, Cengiz Construction published a statement in response to the protests. “Taking into account the environmental impact, all alternative stone quarries have been investigated by the [Ministry of Transportation and Infrastructure] since the start of the process,” it said.

Despite the protests, Cengiz Construction requested that the Ministry of Environment increase the mine's extraction limit. Meanwhile, the Ministry of Transport and Infrastructure issued a permit for the company to open a second mine in Gürdere Village.

Women at the forefront

From the first day of the protests, women have been at the forefront of the struggle in İkizdere.

Women's Resistance is Everywhere!
We do not accept the stone quarry that Cengiz Holding tried to build in the valley of İşkencedere despite the resistance of the people of İkizdere, and the plunder of nature.
Women's will is everywhere!
Women in front of the barricade!

The massacre in #ikizdere continues. The group including old women is pushed away. Tree cutting continues

We are right, we will win. #İkizdereResisting

Local resident Emine Tuncer told DW: “We are beekeeping here, our pastures are here […] How can we make honey now?”

Fındıklı Municipality Women's Choir stands with the villagers who are resisting against stone quarry construction in İkizdere.

Some climbed the trees to prevent them from being cut:

A tree for everyone

The locals told Bianet, a local online media platform: “We won’t give our tea or our gardens to anyone. Our grandmothers, and grandfathers, built our village with their hands, we have no other place to go.”