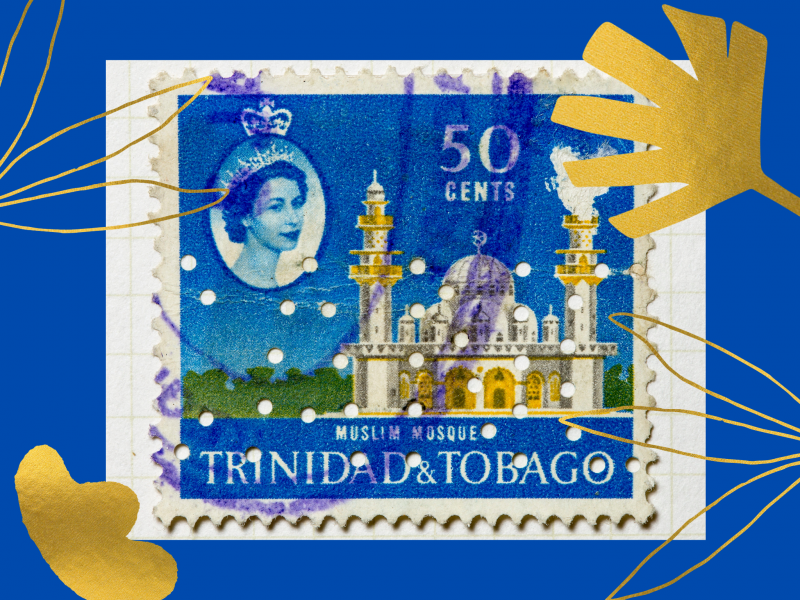 A stamp showing a Muslim mosque in Trinidad and Tobago, with the image of Queen Elizabeth II. Photo [1] by Mark Morgan on Flickr, CC BY 2.0 [2].

From Barbados’ Quran memorisers (hafiz) [3] and Guyana's religious radio programmes [4] to open-air, socially distanced Arabic classes [5] in Trinidad and Tobago, Muslims and their religious practices have been a part of the regional landscape since the first indentured labourers were brought from India nearly 200 years ago—and even before.

One of the most prominent Islamic observances is the holy month of Ramadan [6]. For the close to half a million Muslims [7] scattered across the Caribbean archipelago, who worship at more than 400 masjids (mosques), Ramadan is marked by sunrise to sunset fasting, prayer, engaging with other communities, and remembering their connection to Muslims worldwide.

The celebration of Eid ul-Fitr [8] 2021 takes place on May 13, bringing to a close the traditional month of reflection for observant Muslims. While some modern-day Muslims use technology [9] to predict the ascending of the new, crescent moon which marks the start of Ramadan, many in the Caribbean still follow the tradition of peering up at the sky in search of the crescent moon, often standing on beaches waiting for the glowing sun to sink into the sea.

This is the second year that Ramadan is being relegated to the home because of the restrictions associated with the COVID-19 pandemic, but Muslims have got creative, doing Zoom-iftars [10] (a meal to break the fast), online prayers, and azan-apps [11] (the call to prayer). As for the search for the new moon, which signals the time for Eid, it once again happened from balconies or gardens instead of in public places.

Though predominantly Christian, Trinidad and Tobago, Guyana and Suriname are, nevertheless, the only nations [12] in the western hemisphere to have a national public holiday in observance of Eid ul-Fitr. Because of the region's multicultural make-up—and Islamic traditions of community—people of other faiths join in the Eid celebrations, visiting Muslim friends’ and neighbours’ homes to bring greetings and gifts, and share in meals prepared for this special day.

Muslim history in the region

Islam in the Caribbean began in earnest with the arrival of different waves of indentured labourers from South Asia, starting in 1838 after the end of African slavery in the British West Indies. Many Muslims were counted among the mainly Hindu workers.

The indentured workers came from the northern Indian provinces of Uttar Pradesh [13] and Bihar [14]. Significantly smaller groups came from the Sindh [15] region of Pakistan, the Punjab [16], Kashmir [17], and what was referred to as the Northwest Frontier [18], with the latter mostly comprising political activists, academics, and freedom fighters who were deemed a threat to the British empire. They maintained links with [19] their home country, which resulted in many religious leaders coming from Pakistan and preserving Urdu as the preferred religious language. Trinidad's most popular mosque, the Jinnah Memorial [20], exemplifies this strong connection.

However, there is a different side to the coin. In one research paper, Raymond Chickrie, quoting a Guyanese Islamic teacher based in New York [21], describes how many in Guyana and Suriname did not even realise that Urdu and Arabic were two different languages:

The Arabic here is different than that which I was teaching at the madrasa in Guyana. I remember the Arabic alphabet being alif, be, pe, se, jim che, he… zabar’, and `pesh.

Today, the largest concentration of Muslims in the region—an estimated 100-120,000—can be found in Suriname. With contemporary [22] communities finding solace in shared practices and celebrations, different Muslim sects have formed strong bonds by looking past their cultural differences to embrace the commonalities of their religious practices.

Columbus and the first Muslims

However, the region’s first Muslims were not South Asians at all. Christopher Columbus [23], with his first lieutenants from Morocco and Spain, initially brought Muslims to the Americas—in chains.

Stripped of their identity and religious customs, enslaved people from West Africa—mainly Mandingo and Fulani, with a minority of Moriscos [24] from Spain and North Africa—could not hold on to their Islamic roots. The modern generation, however, has increasingly become more aware of Islam [25], and they are among the largest number of converts.

Historians have even credited Muslim expertise [26]—traders’ maps and nautical information—for Columbus’ success in reaching the “New World,” and there have been many controversial studies suggesting that the Muslim presence in the Americas predated [27] Columbus by several centuries.

The region has had its share of controversy, as well. In the 1960s, ties with the Arab world were strengthened via educational opportunities offered by Libya and Egypt, which attracted a lot of young people wanting to pursue courses of study.

Those who returned home were strongly influenced by Wahhabism [28] rather than the Indo-Iranian influences initially practiced in the region. As a result, Shi’a [29] minority practices slowly disappeared, as well as particular Sunni [30] practices associated with Shi’ism.

Since then, as the producer of the highest number [31] of Islamic State (ISIS) foreign fighters per capita in the West, Trinidad and Tobago was dubbed a “terrorism hotspot” [32], playing a significant role in the caliphate’s development, but the island had felt its tremors about a decade before ISIS was founded, during a 1990 coup attempt [33] led by the Jamaat al Muslimeen [34], a local Islamic group.

Over the years, with many from the region migrating, mainly to the United States, the United Kingdom, France and the Netherlands, new generations of Caribbean Muslims are being born and raised in the diaspora. This has created a type of religious hybrid; the Islam they practice is of a different calibre, with its mixture of different ethnicities and religious associations sometimes putting traditional methods under strain.

Twenty-one-year-old Afifa Khatoun, who is originally from Suriname but now lives in The Netherlands, told Global Voices:

I have no connection with Suriname at all. If I want to do something religious, it will be with my Moroccan and Afghan friends. I am sometimes even ashamed if they ask me about the Caribbean and how we can be Muslims there with all the partying going on.

Sarah Imani, 19, whose family has Trinidadian roots, but was born and raised in the United Kingdom, added:

My grandmother tells me sometimes how she celebrated Eid back home with her Christian girlfriends. My friends here think I am crazy if I tell them to bring some food to the church or invite people from other religions.

Despite some challenges, the Caribbean is definitely a region of religious tolerance. The practice of Islam, having been well accepted by the wider society, has flourished. Suriname, for instance, has a synagogue, a church, and a mosque on the same street [35] and the practitioners of all three faiths are known for celebrating religious feasts with one another. Even in a pandemic, Eid's spirit of peace and togetherness is one not to be forgotten.