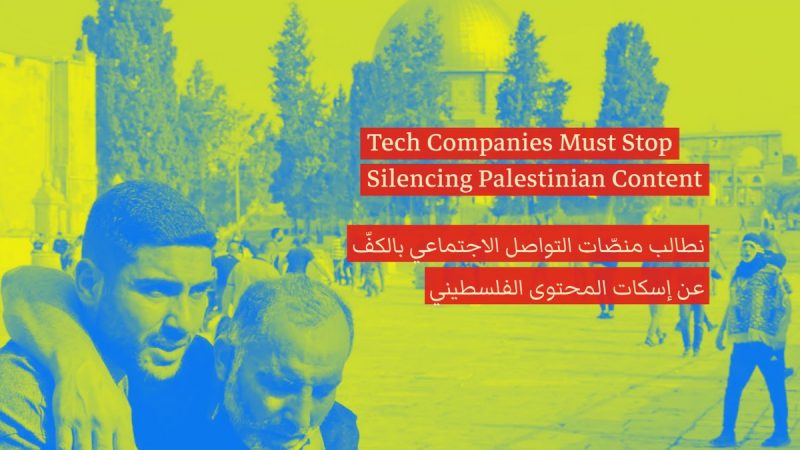 Several non-government organisations launched a petition on May 11 calling on tech companies to stop silencing Palestinian content, in light of recent provocations by Israeli authorities against Palestinians in the occupied city of Jerusalem which have led to some of the worst violence in years.

At least 49 Palestinians and 6 Israelis were killed in an exchange of missiles between Israel and Hamas, the Islamist movement that governs the enclave of Gaza, while hundreds of Palestinian protesters were wounded in Jerusalem as Israeli forces violently confronted demonstrations triggered by restrictions on movements of Palestinians in the Old City and appropriation of their homes by Israeli Jewish settlers.

According to the statement by the signatory organisations, which include SMEX, 7amleh, INSM, Samir Kassir Foundation, Masaar, Team Community, JOSA and the Lebanese Center for Human Rights:

This past week we have witnessed escalations in Israeli police brutality against Palestinians in Sheikh Jarrah in East Jerusalem. Families in the neighborhood now face the imminent threat of being expelled from their homes, while being violently attacked by the Israeli police and Israeli Jewish settlers. Violence spread across the Old City as Israeli forces besieged and raided Al-Aqsa mosque with sound bombs, tear gas and rubber-coated steel bullets, injuring over 300 worshippers and protestors.

Tensions have been brewing since the beginning of Ramadan, Islam's holy month of fasting, which began April 13. Israel's occupation forces blocked Palestinians from accessing and gathering on the steps near Damascus Gate in the Old City, preventing them from keeping a tradition they have long observed after they break their fast. This action coincided with the conclusion of decades-long legal procedures that sanctioned the appropriation by Israeli settlers of the houses of several families in Sheikh Jarrah, a neighbourhood in the city.

In solidarity with Palestinians, people have taken to social media using several hashtags, including #SaveSheikhJarrah, as the petition noted:

People inside and outside Palestine circulated information documenting and denouncing Israel’s war crimes and human rights violations on Twitter, Facebook, Instagram. #SaveSheikhJarrah is getting international attention. Soon enough, we started receiving countless reports of censorship against Palestinian content on these platforms.

The NGOs’ statement labelled as “improbable mistakes” the fact that Facebook reported two “technical issues” within 48 hours which they said targeted Palestinian users and “compromised Jerusalemites’ right to freedom of expression as they tried to make their voices heard globally and sabotaged worldwide coverage of Israeli violence in Al-Aqsa and Sheikh Jarrah.” The statement did not specify the dates of the technical issues.

“It is difficult not to see how these series of technical errors, with their incredibly critical timing and already silenced targets, were actually based on attempts to hide and silence Palestinian voices on social media platforms. We refuse to accept these false excuses as valid explanations for limiting and removing Palestinian content,” the statement said.

Both Facebook and Twitter have been repeatedly been the target of allegations of collaboration with authoritarian regimes in the Middle East to stifle voices of dissent, in a region where social media has played a key role in organising protests and empowering youth and opposition, notably during the Arab Spring.

The statement demanded that Facebook and Twitter immediately stop censoring Palestinian content, reinstate affected posts and accounts, and outlined several steps that both platforms should follow. The statement called the taking down of these accounts and content a “breach of international standards on freedom of expression,” and demanded transparency on the decision-making processes involving Palestinian-related content takedowns.

It also demanded that an investigation into these two incidents be opened immediately.  “Companies must indicate exactly which term in the Community Standards/Policy was violated in each case of censored content,” the petition said.

The petition also demanded the publication of all requests submitted by the Israeli Cyber Unit, including numbers of complaints received, content removal, account suspensions and other content restrictions, along with details on the category of content that was removed as a result of such requests. A further demand by the NGOs is for Facebook and Twitter to cease automatic and AI-based moderation targeting Palestinian content, adding that both platforms should:

Publicly commit to resist government and court orders in breach of International Human Rights Law and International Humanitarian Law, particularly Article 43 of the Hague Regulations which imposes obligations on Israel, as the occupying power, to be “respecting unless absolutely prevented, the laws in force in the country”.

The statement also urged both platforms to commit to the baseline principles outlined by the Santa Clara Principles on Transparency and Accountability in Content Moderation, and, for Facebook to abide by its own Corporate Human Rights Policy, which was launched in March 2021 and in which the company announced its commitment to the UN Guiding Principles for Business and Human Rights.